The House Nostalgia Built: A Collector in Rifton 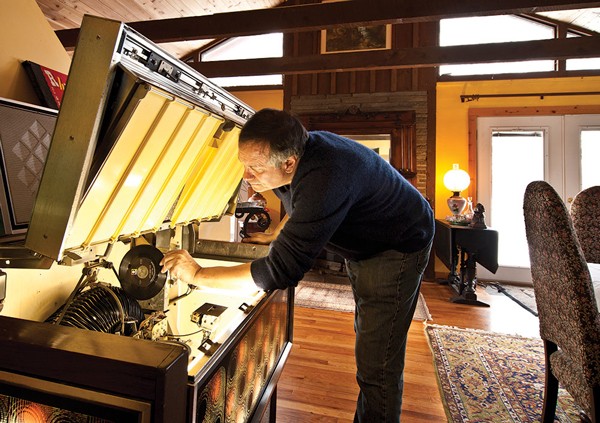 Eleven years ago, writer/producer Frank Basile left his apartment on Manhattan's Upper West Side and moved full-time to his weekend house in Rifton. The house sits on a secluded peninsula overlooking the Sturgeon Pool, a dammed lake surrounded by undeveloped land owned by Central Hudson. Windows on three sides provide a panoramic view of shimmering water and wooded mountains. But after stepping inside the cathedral-ceilinged living room, it's the pop ephemera—the jukebox; the ventriloquist's dummy Jerry Mahoney, a popular fixture on children's TV shows in the 1950s, grinning from the sofa; the vintage wooden radio; the memorabilia from the 1939 World's Fair; the Snoopy phone—that catch your attention. "All of the toys and musical machines work," says Basile as he inserts a quarter into the jukebox, punches in a number, and plays Brenda Lee's "I Wanna Be Wanted." 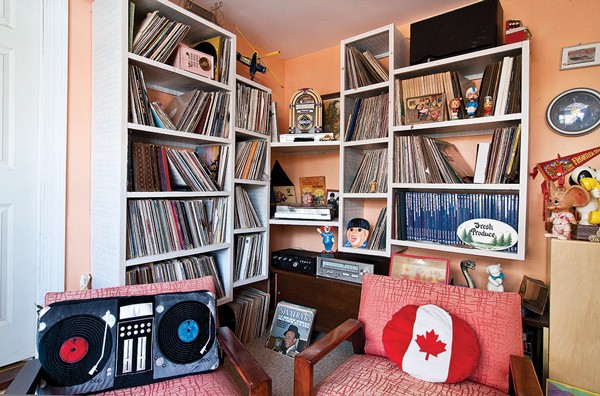 Though his digs are drenched in nostalgia, Basile is a very busy man (he commutes to his Manhattan office a few days a week). I recently heard him interviewed on the Fox Oldies radio station for his nine-part DVD series on the Three Stooges, Hey Moe! Hey Dad! Narrated by Moe's son, Paul Howard—Basile has been a fan since age six, when he saw the Stooges perform live in the Bronx—and with commentary by Whoopi Goldberg and film critic Leonard Maltin, among others, it's a fascinating look at the careers and psychology of Moe Howard, Larry Fine, and Moe's brothers Shemp and Curly (Curly's manic talent and self-destructive tendencies eerily prefigure another tragic figure, John Belushi).

Basile is currently putting the finishing touches on his documentary American Parade, a portrait of the West Point Band. In February, he began filming the new productions at Lincoln Center Theater for the center's archives, part of his 16-year gig as the center's videographer. And he is working on two films, a celebration of Guy Lombardo's legendary, decades-long New Year's Eve broadcasts from the Roosevelt and Waldorf hotels and a teleplay musical of Tiny Tim, based on the one-man show by Spats White. Tiny Tim continues to fascinate audiences because of "his musical knowledge," says Basile. "He's a walking, talking encyclopedia of American folk and early popular music." 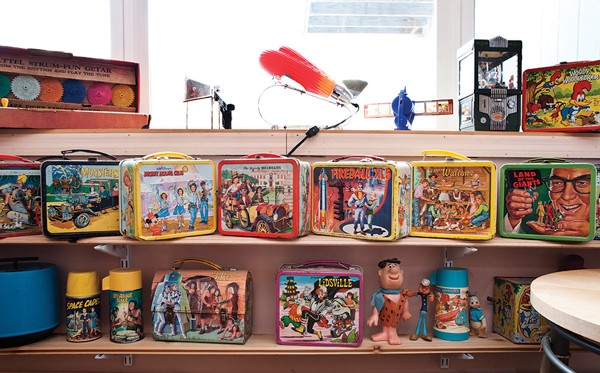 From Renter to Renovator

Basile, who'd camped out on the grounds of the Mohonk Mountain House as a teen (owner Albert Smiley charged $1 a night), began renting the cottage in the peaceful lakeside community in 1990 and purchased it two years later. He raised five cats in the weekend house and expanded it, with a step-down addition to the living room that extends down to a deck over the lake and is heated with a Victorian-era stove. A bedroom over the garage takes similar advantage of the lake views. Basile installed red oak floors in the living room and covered the vaulted ceiling with boards, lending a rustic warmth.

Like the panaroma he enjoys from his living room, Basile's career has also been expansive. The duration of his productions range from five seconds to nine hours. His ability to sniff out a good story resulted in Nuremberg: Reflections and Resonance, a project commissioned by Yeshiva University to film a forum that blossomed into a full-fledged 2006 PBS documentary, including interviews with the original prosecutors, Walter Cronkite, and Nazi hunter Lord Janner, as well as Stalin-commissioned Russian footage of the trials. In Gyroplane Refrain, former CBS anchorman Rolland Smith learns to fly a gyroplane, a low-cost, alternative technology to the helicopter, while Ruben Stoddard: Ain't Misbehavin' provides a behind-the-scenes look at the rehearsals of an "American Idol" winner in his first theatrical role. The films garnered Basile three Telly Awards, the premier prize for TV film and video programs aired regionally, locally, and on cable. 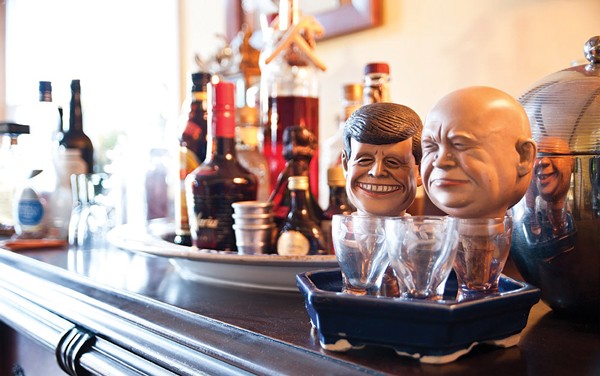 His first big break was getting hired by Ash/LeDonne, then New York's top Broadway promotion agency, where Basile made theatrical commercials for Broadway, a job that involved, among other things, periodically tracking down and recording Broadway legend Elaine Stritch. He continues to create broadcast ad campaigns for dozens of shows, most recently "The Producers" and "A Christmas Story: The Musical," along with providing high-quality footage for "The King and I" for press and marketing.

Basile subsequently worked as a writer/producer at HBO/Cinemax, where he made dozens of featurettes and trailers. Later, at the A&E network, he wrote extensively for "Mission Impossible" star Peter Graves, which led to additional collaborations, including a series about New York destinations called "On the Town." "You never know where the jobs will lead," says Basile. "This business is really about relationships." It's also about being fast on your feet: "I've had to be inventive, to repackage old stuff," says Basile. "And sometimes there's a lot of pressure to be original and distinctive." 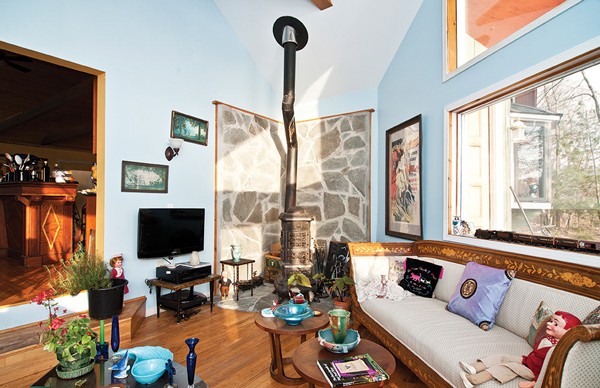