A well-designed garden can contain a multiverse of plantings, pathways, and surprises. It's living art—a dynamic canvas crafted with thought and purpose. Left unmanaged, it will redesign itself, and the original intent can all but disappear as Mother Nature, untamed, fulfills her deepest desire: to grow. When a relic garden is rediscovered, however, there's a chance it can be restored.

This was the case for the formal garden at Bellefield Mansion in Hyde Park, designed by master gardener Beatrix Farrand (1872-1959), a pioneering horticulturalist whose landscape design work in the late 1800s and early 1900s was groundbreaking. "Her passion for gardens and how important they are to the quality of our lives led to an extraordinary determination to make a career for herself against all odds," explains Anne Cleves Symmes, former horticulturalist (1998-2017) and current garden educator at the Beatrix Farrand Garden Association (BFGA). "That energy served her well in breaking down the barriers that women of her era faced, and sustained her prolific life work of more than 200 commissions spanning 50 years."

Located at the Franklin D. Roosevelt National Historic Site, Bellefield Mansion is the former abode of early 1900s State Senator Thomas Newbold and his family. He hired Farrand, his cousin, to design a garden in 1912. By the time she began work at Bellefield, she was a well-respected designer. She wasn't even allowed to pursue design in college, as universities barred women from the field. Instead, she traveled to gardens in Europe and northern Africa, shadowing Charles Sprague Sargent, founder of the Arnold Arboretum at Harvard. By the time she was 27, she was asked to be a founding member of the American Society of Landscape Architects, a rare honor for a young woman.

A State of Suspended Animation

The garden at Bellefield was designed so that the mansion's French doors opened to a terrace leading into 3,000 square feet of hemlock hedges, walled perennial borders, seasonal blossoms, walking paths, and a wild garden beyond its gates. "Mr. Newbold wanted a strolling garden to take a daily perambulation through, out of the gate, and over to his neighbors—the Roosevelts," Symmes says. "It was as an intimate family space, and there are wonderful archival photos of the Newbold children and grandchildren playing in the garden, showing off their pet chickens, riding tricycles on the terrace, and even having snowball fights."

The house was donated to the National Park Service in 1975 without a mandate to maintain the garden. "Park staff removed trellises and laid black plastic to discourage weeds," Symmes says. "The garden was in this state of suspended animation." It wasn't until the 1990s that the plot was recognized as a Farrand design, and in 1997 the Beatrix Farrand Garden Association was formed, in partnership with the Park Service, to preserve her legacy.

Restoring a historic garden has come with its tribulations, including the search for rare plants Farrand used. "Many plants were no longer available," Symmes says. "We started before Google was around, so it was a lot of word of mouth. Maybe a little nursery in Idaho had one rare iris. It felt like a treasure hunt. We had to come up with modern substitutes, sometimes asking ourselves, 'What would Beatrix do?'"

The original design plans were lost, so they adapted a design from a similar garden. "While we use a number of Farrand's signature plants like bulbs, iris, peonies, phlox, and asters, we know that our plantings are adapted to the realities of the modern garden," Symmes says. "Factors like limited time, scarce resources, unstable weather patterns, and entire families of woodchucks are at play."

The garden is in its peak early June, when lush peonies are in full bloom and colors abound. By August, you'll see lilies and Japanese anemones. Some rich purple asters bloom in October, in beautiful contrast with the yellows and oranges of surrounding fall foliage. "There's always something happening during the season, but it's enjoyable even in the winter when the snow blankets everything," Symmes says. "It's a garden to stroll and be, letting it all wash over you. It's simple, contemplative, quieting, and serene. We all need a place like this we can go to." 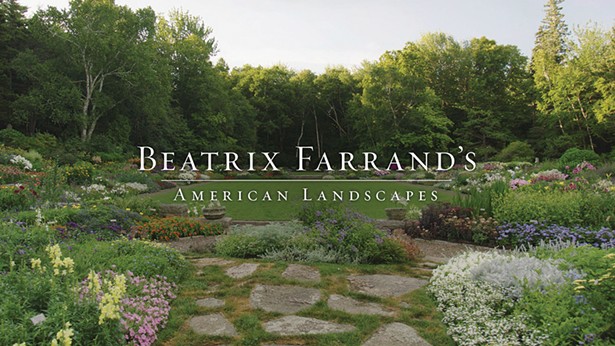 According to Symmes, Farrand did some additional design in the region, including the landscape at St. Paul's Episcopal Church in Tivoli and some residential work in Pocantico Hills, but they have been lost to time. The restored garden at Bellefield is the sole remaining project of hers in the area. Some of her greatest works live on around the country. Dumbarton Oaks in Washington, DC, is said to be her masterwork. She also teamed with John D. Rockefeller, Jr. to beautify Maine's Acadia National Park, even advocating for its designation as a national park. Maine is also home to a horticultural design educational center at her family's former summer home, Reef Point, in Bar Harbor. As a child, Farrand would spend afternoons at Reef Point playing in the forest, digging up plants, and transferring them to a garden beside the house.

More information about Farrand and the garden at Bellefield can be found at the Home of FDR's Visitor's Center. The BFGA also produced a documentary, Beatrix Farrand's American Landscapes, featuring the work of both Farrand and famed modern-day garden designer Lynden B. Miller, a Farrand-devotee best known for her restoration of the Conservatory Garden in Central Park in 1982. The one-hour documentary premieres June 1-2 at the BFGA event Farrand/FORWARD: A Symposium on the Future of Beatrix Farrand's Public Landscapes. The Association is actively working on additional local screenings.

"Farrand was very outspoken about gardening being all of the arts in one. It's like a sculpture, but dynamic over time. Form, line, color—everything changes," says Symmes. "The more you study her work, the more you can see the thought in it, the choreography. This garden is more than just a pretty spot. It's about her life, history, and work. It's her legacy being fulfilled."

Find Healing at This New Therapy Garden in Woodstock

Heirlooms Along the Hudson, with Susan MacAvery