The Health Price of Plastics 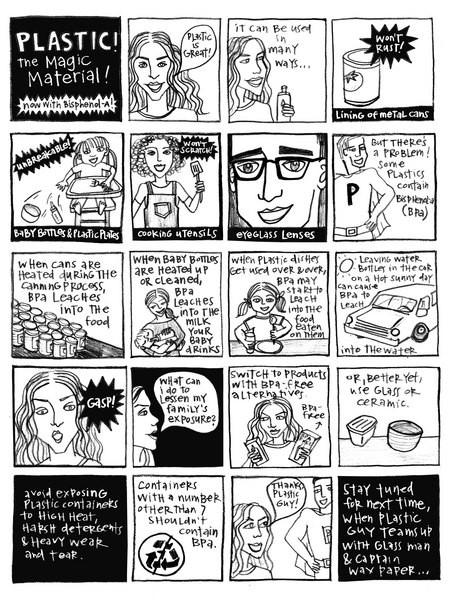 For a parent of a young child, each plastic plate, saucer, or bottle thrown from the high chair is a gift of technology when it doesn’t shatter into thousands of pieces. For the rest of us, plastic is the material of choice for items too numerous to tally. At the same time, many of us have simmerings of concern that plastic may be exposing us to harmful chemicals when it is heated, boiled, microwaved, frozen, left in the baking sun, dishwashed, scrubbed, chewed on, or dropped for the umpteenth time. And what about teething toys parents sterilize in a pot of boiling water, or toddlers’ cups and straws used warm from the dishwasher, or plastic bowls used to mix instant cereal?

Bisphenol A (BPA) and xenoestrogens
In the 1950s a manmade chemical, BPA, was found to be a good starting material for the synthesis of polycarbonate, a unique, sturdy plastic. But, earlier, during the 1930s, a study in the scientific journal Nature reported that BPA had estrogen-like properties when fed to rats. (BPA apparently was being investigated as a potential synthetic estrogen.) Since then, hundreds of studies have confirmed that BPA is a xenoestrogen. Xenoestrogens are compounds that affect living organisms in ways similar to the naturally occuring hormone estrogen. BPA attaches to estrogen receptors, which are proteins within the nucleus of cells that mediate estrogen’s actions in humans and many animals, of both sexes. BPA also interacts with thryoid hormone receptors, androgen receptors, and may interfere with an key enzyme that converts androgens into estrogens.

In 1996 the Environmental Protection Agency categorized xenoestrogens, including BPA, as endocrine disruptors, which are chemicals that can have significant influence on the endocrine (hormonal) and reproductive systems. BPA is a weak estrogen, meaning it is not as poweful as our natural hormone. Still, routine exposure to weak estrogens may influence the production of natural estrogen, alter the response of cells, or interact with estrogen-sensitive medications. There may be additive effects of exposure to this and other xenoestrogens in everyday chemicals (such as in pesticides and herbicides). In addition, a new type of estrogen receptor was recently discovered on the surfaces of cells to which BPA attaches and triggers certain cellular responses as strongly as estrogen does, and at very low doses.

The question of BPA’s safety has its ardent defenders and equally ardent skeptics. One point of contention is whether significant amounts of BPA get into foods and beverages from containers, and then into us. In 1998, researcher Frederick vom Saal published proof that BPA was leaching from plastic tableware, bottle tops, and the plastic linings of some metal canned foods during the heated canning process. Scientists went a step further to discover that foods processed in cans lined in plastic had detectable levels of BPA. In 1999, studies confirmed reports by the Food and Drug Administration that 95 percent of baby bottles sold in the United States were leaching BPA when heated and scratched. In 2005, the Centers for Disease Control and Prevention (CDC) reported that 95 percent of Americans excrete at least 100 parts per trillion of BPA in their urine, demonstrating that we all are getting at least some exposure from plastics. A 2008 CDC research study confirmed this, and found the amounts of BPA to often exceed the current safety threshold of exposure set by the EPA.

Debates continue, however, about how much BPA leaches from polycarbonate, and under what conditions. For instance, researchers at the Department of Pharmacology and Cell Biophysics at the University of Cincinnati College of Medicine reported in January that BPA leached from high-quality polycarbonate water bottles at rates ranging from 0.20 to 0.79 nanograms per hour. After holding boiling water, the bottles leached 55 times that amount. The researchers concluded that “the amounts of BPA found to migrate from polycarbonate drinking bottles should be considered as a contributing source to the total ‘EDC-burden’ [endocrine-disrupting compound-burden].”

The Bisphenol A Global Industry Group dismisses the findings in its online information by calling this yet another “scare story,” while ceding that “increased migration into boiling water is not news at all since it is well known as a general phenomenon that migration levels increase with increasing temperature.” The group discounts several other scientific studies as scare stories that promote myths among consumers.

What’s the harm in BPA?
Studies funded by the plastics industry support the stance that BPA exposure produces no ill effects and is well below governmental safety limits. Industry literature continues to assert that low doses of BPA are safe, as are plastics made with it. The American Plastics Council funded an expert panel’s input, which concluded in 2004, after reviewing 19 published animal studies for “potential male reproductive impacts” in particular, that evidence for low-dose effects of BPA was weak.