Rhinebeck - Like a Phoenix rising from the ashes, The Rhinecliff Hotel, established in 1854, closed and almost condemned in 2002, has been reborn! British-born brothers James and David Chapman purchased the historic railroad hotel near Rhinebeck, NY in November 2003 , and toiled for five years in a “labor of love” to save and renovate the classic 1854 property. Reopened in September of 2008, and now on the National Register of Historic Places , the brothers have transformed The Rhinecliff into one of the hottest hotels and "must go to" dining establishments in the Hudson River Valley. Recently chosen by National Geographic Traveler as one of their "must visit" hotels in 2009, and just winning the "BEST JAZZ BRUNCH 2009" award from Hudson Valley Magazine, The Rhinecliff is truly the area’s best historic and gastronomic transformation.

Nestled on the banks of the Hudson River in the picturesque Hamlet of Rhinecliff, NY, The Rhinecliff was built in 1854 by architect George Veitch. The hotel was originally a simple rooming house for travelers, offering sustenance and rest for both man and horse, as well as serving the bustling Rhinecliff-Kingston Ferry Terminal and the newly opened Hudson River Railroad . With some notoriety as a raucous music watering hole, the hotel closed its doors in 2002, until the Chapman brothers took up their quest.

James Chapman, having opened ten restaurants across six countries in three continents, gave up his dynamic New York City restaurant career and felt ready for the task. And Brother David, having managed financial consulting teams across complex Wall Street and London capital markets [trading environments], felt he had the logistical skills to deal with the historic transformation.

And they were correct. In September 2008, The Rhinecliff emerged with new life as a boutique country, full-service hotel. The transformed hotel features beautiful antique wood floors , historic beams, re-finished doors, stone fireplaces [hand-stacked by an English craftsman], and the original Victorian oak bar, all painstakingly cleaned and restored to their original pristine condition . The nine guest bedrooms are outfitted with the latest in luxury amenities; all featuring private balconies overlooking the majestic Hudson River, king-sized beds, flat screen TVs , hi-fi music systems, double whirlpool air-massage tubs, and state-of-the-art heating, air-conditioning and communications systems. Award-winning architect David Borenstein added his personal creative touches throughout the hotel. Recycled wood from the old building was used to create countertops, shower brackets and wa ll art, while rustic corrugated metal roofing was used in sculptur es and artwork. Borenstein improvised an in novative use of a copper gutter to collect gray water, and created partitions with cedar do ors and painted glass inserts. There's a banquet room and a brass erie-style bar/restaurant, “The Bar at the Rhinecliff.” The restaurant has a passion for seasonal area and sustainable produce, features elegant European-style cuisine for breakfast, lunch and dinner (served daily).

And let’s not forget special events. Whether it’s a celebration, wedding, small “get together” or corporate event, The Rhinecliff offers the location, ambiance, exceptional dining and experienced staff to ensure that every event is unique, memorable, a success.

Celebrate Halloween at the Rhinecliff on Saturday October 31st from 8pm till late. The Rhinecliff has an open mic late on Tuesdays, local musicians on Friday, Jazz Brunch on Sunday and Special Evnets throughout the year.

Only 90 minutes from Manhattan and 45 from Albany via Amtrak, and two miles from Rhinebeck, NY, visit the Rhinecliff website at www.therhinecliff.com for a complete schedule of special events, accommodation offers and sample menus. 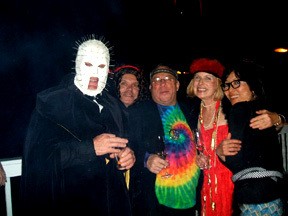 The Best Corn Mazes in the Hudson Valley