The Girls of Her Youth 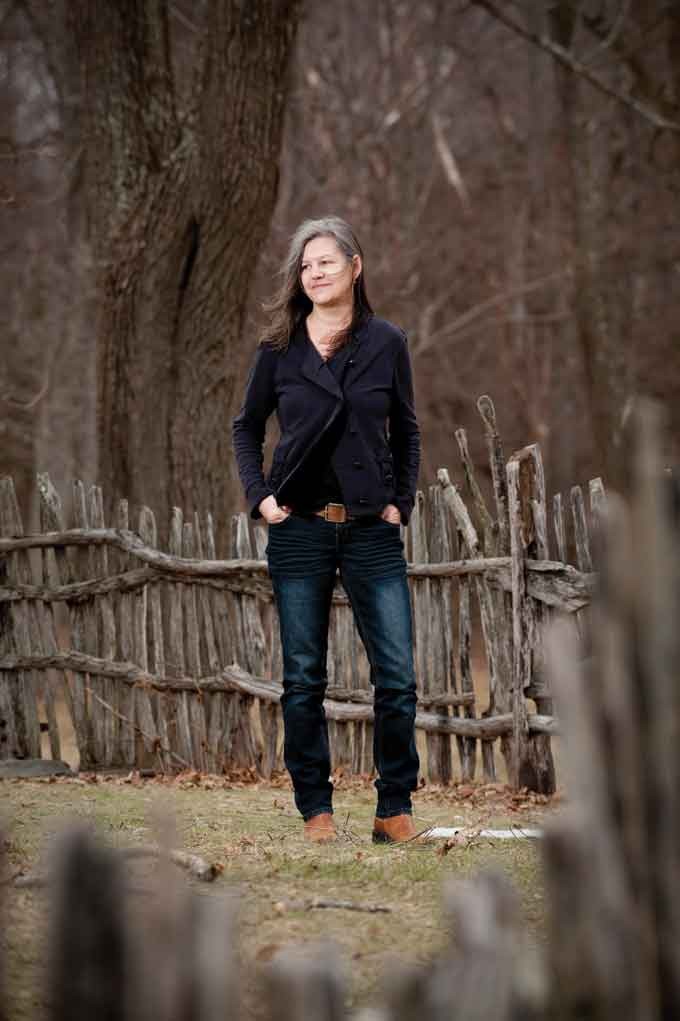 You know you’re in good hands when a teenage narrator starts her story with, “We can’t believe the house is on fire. It’s so embarrassing first of all, and so dangerous second of all. Also, we’re supposed to be in charge here, so there’s a sense of somebody not doing their job.” The opening lines of Jo Ann Beard’s just-published novel In Zanesville

(Little, Brown, 2011) burrow deep into the 14-year-old mind, where being embarrassed is worse than death and every disaster is “somebody’s” fault.

There are writers who thrive on high drama, and writers who make the everyday sing. Beard is defiantly in the latter camp. In the movies, she’d be a genius character actor, her craft evoking the plainspoken truths, buried emotions, and glinting weirdness of real people’s lives.

Her first book, The Boys of My Youth

(Little, Brown, 1998), a much-praised collection of personal essays, shares a lot of DNA with In Zanesville

. Both books brilliantly conjure a Midwestern coming of age in an era when mothers smoked, fathers drank, and plaid culottes were an envy item. In Zanesville

's narrator is a self-described “sidekick,” geeky enough to join marching band and rebellious enough to quit during a parade. Although she’s never named, there’s a bit of a tease: Her first name sounds something like “Joan,” and one of Little Women’s March sisters. Could it be Jo Ann? Is this a memoir in disguise?

“I don’t actually get too involved in that conversation. I have enough trouble just writing it,” Beard says. “For every piece I write, even if I’m writing in a journalistic way about somebody else’s experience, I have to inhabit the character so fully that I feel as if I’m remembering it. Fiction feels exactly the same–the writing process is so intensely about imagining something in order to put it on the page. It’s hard to know what’s true and what’s fiction and what’s in between, which might be a little where my work resides.”

She picks up her teacup and sips. We’re sitting in the kitchen of the Rhinebeck farmhouse Beard shares with novelist Scott Spencer. A cast-iron woodstove squats inside a colonial fireplace scaled for roasting an ox. An old dog named Shep dozes under a window. Outside, it’s still not quite spring—there are patches of late-season snow and a skim of ice over the duck pond, a steady rain falling. Beard pulls her cardigan closer, rearranging a patterned green scarf. She speaks slowly and thoughtfully, and when she falls silent, her eyes have a palpable sadness.

Spencer breezes in with a second dog and a larger-than-life blast of energy, cheerfully complaining that he just came from Pete’s Famous, where he was reading a novel he’s fallen in love with, but people kept talking to him. “You’re too popular,” Beard says drily. “You need to borrow my stay-away face.” She demonstrates. Spencer takes the hint and heads upstairs.

Beard grew up in Moline, Illinois, a factory town on the Mississippi River. A middle child, she fell in love with books “so early I can’t remember,” building a “reading nest” behind a green armchair in the living room. This was considered a sign of early eccentricity. “In my family, reading was not considered a productive way to spend time. Nobody bothered me much, but it was not valued.”

What was? “Conforming,” says Beard. “I defied all their dreams. The expectation was that I would grow up, get a job as a secretary, get married, and have children.”

She complied with the first three. “I was a great secretary,” she reports with pride. “I could type really fast.” She stayed in Moline till age 30, when her husband entered a graduate program at the University of Iowa. Beard also enrolled, earning a BA in studio art. “In my last year, I took a writing class and realized that was just easier for me. It felt deeply familiar because of a lifelong immersion in books.” She earned a master’s in nonfiction writing and worked in a campus office.

But Beard’s life in Iowa City was jolted by tragedy. Her essay “The Fourth State of Matter” describes the shooting deaths of six of her colleagues at the hands of a seventh on November 1, 1991. Several years later, she set out to write about the lingering death of a beloved collie and her dissolving marriage. The events of that day rip through the essay with shocking violence, just as the shootings exploded on an ordinary day filled with dying dogs and failing marriages. It’s a breathtaking piece of bravura writing, connecting the dots of shattered lives like constellations, and its publication in the New Yorker jumpstarted Beard’s career.

In the interim, she moved to Ithaca. “The weather is hideous. There’s one road in, one road out—it’s the depression capital of the world. But I fell in love with the beauty. It’s like a miniature version of the Rocky Mountains.” She spent hours outdoors every day, taking long walks through the gorges. “I was learning to be alone. I spent so many years with such a cacophony of family, friends, marriage.”

The profound loneliness made her a far braver writer. “You have to be willing to plumb your own depths,” Beard asserts. “How do you know who your character is if you don’t know who you are?”

Then she met Spencer and left. “God love Ithaca, I will always be grateful to it, but I had to bail. I couldn’t take one more day of snow blowing past my window.” She rented a house in Tarrytown and visited Spencer on weekends, giving herself a year to figure out “if I could throw in my lot with another relationship, and live in this rambling old farmhouse for the rest of my life.”

What swung the balance? Beard smiles. “Scott did. As soon as I met him, I couldn’t imagine being with anyone else.”

They’re a contrasting pair. “Scott is the opposite kind of writer from me,” Beard says. “He attends to his writing every day. I attend to it on a yearly basis; I do it in the summer.” (She’s a virtuoso procrastinator—in The Boys of My Youth

, she says of an artists colony, “I hate it here; why did I come here? All there is to do is write.”) Spencer has published three novels since they’ve been together, and he’s a manic reviser, frequently tossing out hundreds of pages to make a fresh start.

“That’s when I feel like I need to take to my bed. It makes me completely frantic,” says Beard. “I never throw away one word. I couldn’t bear to. I choose my words very carefully. I have so much patience as a writer that I don’t give up. I will work on something for years and years. My process is very slow, and eventually, I can usually make it pay off.”

She adds gratefully, “Scott never comments on all the long hours I spend not writing. I want to be writing. I feel better about myself when I’m writing.” But she will not be rushed.

“I see everything inside my head like a movie before writing a word,” she explains. When the image is crystal clear, she choose the words to describe it. “My process is 100 percent chronological. I don’t go backward. In Zanesville

This dogged pursuit of the next perfect sentence may explain the long gap between books. Beard also teaches at Sarah Lawrence, where her colleagues include Marie Howe, Stephen O’Connor, and Vijay Seshadri, among many others. “Teaching takes energy away from my work because there’s a lot of reading, but I love talking about great essays: E. B. White, Annie Dillard, Joan Didion, Virginia Woolf, David Foster Wallace.”

Though she kept writing essays, Beard had no plans for another book until a publisher approached her about writing for teens. She wrote the first chapter of In Zanesville

as a sample; the consensus was that it felt too adult. But she was unswayed. “By the time they said no thank you, I was well into it and had to keep going,” she says. “I decided to let the story be what it was and let the publishing end take care of itself.”

Clearly it has. A starred review in Publishers Weekly raves, “Beard is a faultless chronicler of the young and hopeful; readers couldn’t ask for a better guide through the wilds of adolescence.”

In Zanesville will have special resonance for those who grew up in the 1960s and can appreciate its perfect-pitch details of time and place, music and wardrobe. But Beard hopes younger readers will find it as well, perhaps lured by the bookjacket image by 15-year-old photographer/blogger Olivia Bee. Before starting her sample chapter, Beard read “a stack of YAs. I got frustrated because everything felt so overt, as though teenagers can’t have conflicting notions in their heads, when they’re nothing but conflicting notions.” She also rejects the idea that period details are a turnoff. After reading at a high school, she asked her audience if they knew who Patty Duke and Hayley Mills were. “They didn’t, but they got it. They intuit just like we intuit.”

, and hopes to write it this summer. “I would like to write a book for children that’s as important and meaningful as Charlotte’s Web,” she says. “I have two book ideas started. Each of them has one sentence.”

Her face lights up in triumph. “YES! I have my first sentence!”

Jo Ann Beard will read on Friday 5/13 at 7pm, Oblong Books, Rhinebeck, and on Saturday, 5/14, at 4pm at the Millbrook Free Library, as part of the Millbrook Book Festival. www.millbrookbookfestival.org.