The Gift of Adventure 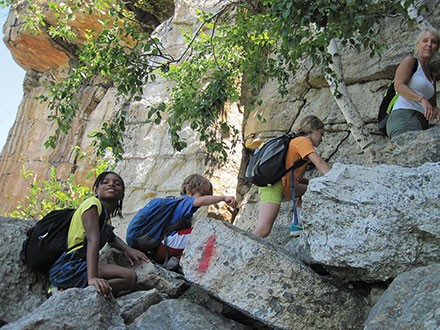 One day, when her family was hosting 12-year-old Toshiki, Jenny Fowler paused to marvel. Toshiki had one month for summer break, and he left his densely populated neighborhood in Osaka to spend it on the Fowler-Bickings' homestead in Port Ewen, amidst the chickens, trampoline, and tree house. Toshiki seemed so young, but students often study abroad earlier in Japan before their schoolwork ramps up. In the same independent and committed spirit that Toshiki got to school (riding first his bike, then the train, a bus, and then walking), he traveled to the other side of the globe to live with strangers in another country. It was powerful to Fowler.

Toshiki's introduction to American culture was through the Labo program, which partners with States 4H International to bring 12 students from Japan each summer for a cultural immersion experience. Toshiki had a bed in Lyle Bicking's room. Both 12 and the older brothers of sisters, the boys found even more common ground in their love of comics and a curiosity about the other's culture. The idea of Labo is to help students develop English-language skills, build friendships and bridge cultures, and connect 4H communities around the world. Toshiki's suitcase was packed with udon noodles and gifts, and a checklist of activities Labo encouraged him to try, like cooking a traditional meal for his hosts. Of that meeting, Lyle says, "The best part was just having another sibling for a month, in a way."

The Fowler-Bickings took Toshiki camping, swimming, and to realize Toshiki's dream to see Niagara Falls. But mostly, Fowler noticed that folding Toshiki into their family life was more about dialing things back. Reading and speaking in another language takes effort, so even a simple meal out, reading a menu, was tiring. Fowler would schedule extra time to get out of the house in case there were communication gaps about what to bring, and tried not to be too ambitious with plans. Often, Toshiki would prefer to spend the afternoon reading in his own language. "The thing sometimes people forget is that those ordinary things of just getting around in another country can be exciting," says Fowler. Toshiki rode buses all the time at home, but he'd never been on the subway until he went to New York with the Fowler-Bickings, and he found it to be a real adventure.

Fowler understands all this, especially because she studied in Germany as a high school senior and has tutored Russian refugees in English. "I think it's good for us, as a culture, to open ourselves up to each other and to people who are from other countries," she says. "I just love being at that intersection of coming from different places and trying to find common ground."

Fowler could be quoting from AFS-USA's press material. Their goal is to work for peace and justice by providing international and intercultural learning experiences through a global volunteer partnership. "We're one of the most long-standing non-profit student exchange programs and are accredited through CSIET," says Jessica Greenstein, a Community Outreach Specialist. AFS-USA (formerly American Field Service) grew from a World War I ambulance corps into the exchange program just after World War II. It now sends students to over 40 countries, and this year, locally hosted 31 students from 17 countries. Those involved with the exchanges are ambassadors for their culture and for the program, gaining personal experience while, in a larger sense, promoting peace.

Greenstein gives presentations in schools to demystify the study-abroad experience for students and their families, and finds that vetting a program is key. Families can get a lot from meeting the volunteers and understanding a program's accreditation, which adds a level of accountability. Some programs pay the host and some are nonprofit, which Greenstein says is an important distinction. In AFS, the students come on a J-1 visa, which means they can only do incidental work, like babysitting and lawn care. "You're treating the students like family members, introducing them to American culture," Greenstein explains. "If you're going out for an activity together, you would pay for them to go with you. But you're not expected to take them on expensive trips, and they also bring their own spending money." Fowler recommends asking a lot of questions about expectations and logistics so families can understand their role.

Programs on the AFS roster are enticing. Summers abroad can range from four to eight weeks, as either an immersive homestay with a family or as an intensive language program in a dormitory, with classes in the morning and cultural experiences in the afternoons. There are also specialized summer programs. In Costa Rica, students work in the rain forest. In Ghana, they volunteer in an orphanage. In Paraguay, they study soccer and Spanish. In Ireland, they focus on Irish culture and adventure, like surfing. AFS offers a wide variety of scholarships to make it all possible. One scholarship is funded through the National Security Language Initiative, to provide opportunity for students to study less commonly taught languages, like Hindi, Chinese, Russian, Arabic, and Persian. Part of a US government initiative, it prepares Americans with the linguistic skills and cultural knowledge to promote international dialogue and support American engagement abroad. Plus, it sparks a love of learning languages.