The Genius of Family 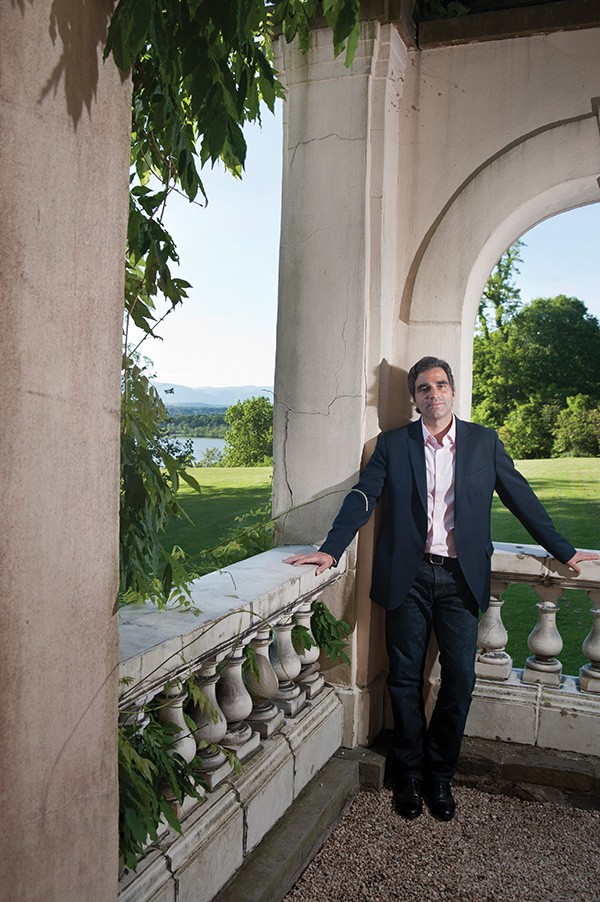 Joseph Luzzi is handy with chopsticks. The Italian Studies professor and author of My Two Italies (Farrar, Straus and Giroux, 2014) suggested meeting at Murray's, a Tivoli eatery run by Bard graduates. When I arrive, Luzzi is standing outside, a bella figura in charcoal suit jacket, pale pink shirt, and faded jeans. The café is closed, so we go to Osaka, the Japanese restaurant next door. The incongruity of discussing a book that starts with "the smell of frittata" while eating sushi makes him smile. I spot a Band-Aid on his thumb, a homely touch that softens his dark-browed handsomeness.

My Two Italies' title refers to the pull between the hardscrabble south of Luzzi's Calabrese heritage and the northern Italian Renaissance culture of his professional passions. ("I yearned for the Italy of Dante and Michelangelo, not the one of sharp cheese and salted anchovies," he writes.)

There's also the dichotomy of Italian and Italian-American identities. The first child born in America after his parents and four older siblings immigrated, Luzzi can claim ties to both, though his preference is clear: "Dante described his quest for the elusive Italian language as the hunt for a fragrant panther that knew its way around the woods; Snooki in leopard print advertised her ethnic identity with decidedly less mystery."

The book itself has a dual identity. Part family memoir, part cultural study, its twin strands intertwine like a traditional Calabrian Easter bread. "It's ostensibly about Italy, but it's also about American families," Luzzi says, dredging a tuna roll in soy sauce. "It's a story of immigration. So many of us have stories of parents and grandparents that shape us."

The book proposal he sold was primarily a cultural history, with family vignettes interspersed. The first chapter he wrote centered on Silvio Berlusconi, Italy's scandal-plagued prime minister. But early readers found the family stories most compelling, and the book's balance began to shift. (Berlusconi is still in the mix, but he doesn't show up until chapter five.)

Instead, the book opens with an Easter dinner at which Luzzi's pet rabbit became the entree. Even as a child, young Joe knew this wasn't the norm in suburban Rhode Island, where his neighbors had "vacuumed Pontiac Bonnevilles and pine-scented air fresheners." Instead of a neatly mowed lawn, his father filled every square inch with vegetable gardens, which he tended with old-country stubbornness even after a stroke left him partially paralyzed.

Pasquale Luzzi was a prisoner of war in Germany; his captor's niece became his lover and, after the war ended, his wife. When she got pregnant, he stole a bicycle and escaped before the baby was born. Back home, he set his sights on Yolanda Crocco, a local landowner's daughter. He courted her with serenades and gifts of candied almonds. Then he broke into her house and held her at gunpoint, declaring, "I'm going to rape you."

Yolanda fended him off, brandishing scissors. When neighbors arrived, he swore he hadn't touched her, but was enacting a ritual acchiapare ("to grab") to dishonor his victim so she'd have to marry him. He was accused of violenza carnale (carnal violence); a village judge ruled that unless Yolanda consented to marriage, he'd be imprisoned.  Unable to bear the thought of him suffering on her account, she agreed. She was just shy of 15 years old.

The details of this violent courtship were new to Luzzi, though he knew his father had been held captive by a blond German. "You grow up and there are these family stories floating around, but you don't probe," he says. "I probed, because I was writing this book."

Pasquale is no longer alive, but Luzzi interviewed his mother extensively. "The most surprising thing she said was that she'd been 'happy and carefree' in the old country.  Nothing had ever shocked me more—it was like saying, 'You have an extra head on your shoulder.'"

He also saw his volatile father—"a fierce, ethnic Lear roaring across the plains of old age"—with new eyes. "As a first-generation child, you want to fit in, you have your own axes to grind. I realized that, like Dante, my dad was truly in exile. He never acclimated to life in the US, never really spoke English. He was a landscaper who worked in a factory. He built a life for us, but it was a true sacrifice."

Writing such personal stories was not always comfortable. "I'm a private person—I am by nature kind of reticent," Luzzi explains. He was also concerned with his family's privacy. "I didn't take this lightly. To the best of my powers, it's 100 percent accurate. First, I hope it reflects my profound love of my family. Second, if you're going to tell the story, you've got to tell the story."