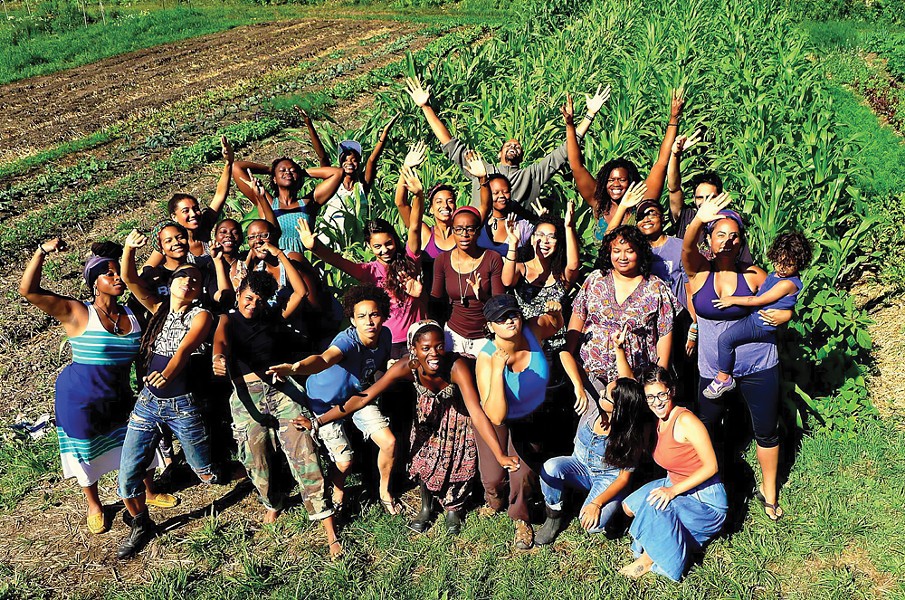 Twice a week, Tyler Dennis would load up his Dodge truck with carrots, squash, lettuce, and tomatoes and drive to the Union Square Greenmarket in New York City. Dennis, the owner of Alewife Farm in Clinton Corners, relied on restaurants, including those that shopped at the market, for around two-thirds of his business. Then COVID-19 hit and restaurants closed. "We definitely went through a period of a sharp drop in revenue," he says. "It was a shock to the system initially. I was definitely in a real cash crunch for a while." It was only when Dennis pivoted to new methods of distribution—including contributing to produce boxes that Lola Pizza in Kingston sold, and selling to customers directly at his farm—that his sales rebounded.

In nearby Kingston, community members found themselves without enough to eat, especially families with children who relied on school meals. Local organizers set up the Kingston Emergency Food Collaborative, paying restaurants that were otherwise closed to cook meals, and then delivering the meals to people who requested them. The effort was affiliated with an even larger one by Ulster County, Project Resilience, which has served well over 100,000 meals since officials announced it on March 17.

As these scenarios have played out across the Hudson Valley and the country, not everyone has been as fortunate as Dennis or the people who received meals. Farmers have scrambled to find new ways to distribute their food and community members have had to find new ways to get it. Hudson Valley food banks have reported surges in requests for help. NY FarmNet, a farmer-assistance service located at Cornell University in Ithaca, received around twice as many calls in March as usual. Problems with the food system disproportionately impact people of color, an issue that has garnered renewed attention as the country confronts systemic racism and police killings of black people.

Thought leaders in food justice, environmental justice, land access, and farm worker advocacy say now is a time to use the disruption to food systems to envision new ones—and to start putting those new systems in place. "COVID really was that catalyst in some ways to cast a light on the cracks in our system, so there's this illumination," says Stephanie Morningstar, coordinator of the Northeast Farmers of Color Land Trust, which has members in the Hudson Valley. "Before this, there was already a crisis happening."

What would a new food system look like? For one thing, it must address food access, according to Steve Rosenberg, senior vice president of Scenic Hudson, an environmental organization, and executive director of the Scenic Hudson Land Trust. The organization counted more than 5,000 farms in the Hudson Valley region, and it is pushing for policies that would make it easier for people in cities to access food from those farms.

"What COVID has exposed is the challenge of getting fresh, healthy food to the people who need it most," Rosenberg says. "There is no policy support system to get food into those communities." New policies would support farmers so that they could better distribute food locally, and also create ways for cities to more efficiently get that food instead of turning to suppliers farther away. This new infrastructure would also be more environmentally sustainable, as the farmers would use practices that promote soil health and climate resiliency.

Scenic Hudson has already tried to bridge the gap between farms and communities lacking in food access. The organization helped develop urban farm plots in Poughkeepsie and Newburgh. "People are seeing this as potentially something we'll look back on as a real watershed moment," Rosenberg says. "This moment may present the last best chance to make some significant moves to address these very issues."

Some food justice advocates believe that the farms themselves need reforming, especially when it comes to who is farming. They point out that a century ago, 14 percent of farmers in the United States were black, and now only around one percent are.

Soul Fire Farm in Petersburg, 30 miles east of Albany, wants to fix this. "It's about reclaiming our own history," says Larisa Jacobson, codirector and partnerships director at the farm, which has fruits, vegetables, sheep, pigs, and chickens, and hosts training programs. "These great oppressions and violences were wrought upon black and brown people on the land. In essence, this, along with forced migration to urban areas because of racialized violence, severed many of us from our agrarian histories."

Jacobson describes a food system based on stolen land and stolen labor. "Our whole food system," Jacobson says, "is essentially kept moving primarily by people of color in this country who themselves then experience food insecurity." According to the US Department of Agriculture, almost a quarter of black households are food insecure, nearly double the national average.

During the pandemic, Soul Fire Farm has hosted webinars and delivered food to local families in need. It is also providing families in Troy and Albany with materials, tools, seeds, and seedlings to start their own gardens. But Jacobson and the other farmers are also thinking about longer-term ways to create a more equitable food system. Jacobson says this would mean connecting farmers of color with land, funding, and culturally relevant technical assistance, and for institutions to prioritize buying from farmers of color.

A main obstacle for farmers of color is land access. "Almost 100 percent of the farmland in the Northeast is owned by white folks, and that has everything to do with systemic racism and discrimination," says Morningstar, from the Northeast Farmers of Color Land Trust. "At every step of the way, land has been used as a tool and a resource to keep us marginalized and oppressed."

The Land Trust seeks a redistribution of land to farmers of color. "What we're calling for is a redistribution of the wealth that was taken from us," Morningstar says. "We need to reframe what wealth looks like, we need to reframe what resources look like, we need to start looking at land as not just a resource, but as a being that needs just as much love and attention as any other being." A new food system should involve equitable access to land, resources, markets, and training.

Christine Hutchinson experienced the land-access problem firsthand. The Newburgh high school teacher started a poultry farm around a decade ago. She had no land or money for it, so she asked strangers if she could use their land, and a former farmer agreed. Her operation expanded to 300 chickens, ducks, and turkeys. But using someone else's land and sharing it with other people was difficult. "Things were happening to my birds, eggs, and belongings," she says. So she left, and when she bought her own small plot in Newburgh, she learned it was zoned for certain animals, but not chickens. She decided to close her farm.

"Land access was a major problem. And this is coming from a person who does work another job and makes a decent salary and was able to productively raise poultry at a profit of sorts. I could not afford to buy land to farm," says Hutchinson, who is on the board of the Northeast Farmers of Color Land Trust and is director of Our Core, in Newburgh, which runs youth programs. Hutchinson says this was because of race: "It's a matter of who you know and your connections and where they are, and our folks are not on land."

Advances for farmers of color, according to advocates, must also help farm workers, 80 percent of whom identify as Latino/Hispanic. "Our food system," says Emma Kreyche, advocacy director at the Worker Justice Center of New York, a Hudson Valley-based nonprofit that provides legal assistance to farm workers and immigrant workers, "relies on the existence of a low-wage and, frankly, vulnerable workforce. Farm workers are not just poorly compensated; they are underprotected and they are generally vulnerable because of immigration status issues." Fixing this would mean radically changing the relationship between agriculture and labor, according to Kreyche.

The lack of protections has likely contributed to coronavirus outbreaks among farm workers. New York state has issued guidance for protecting these workers during the pandemic, but it consists primarily of recommendations, not requirements. As of early May, the biggest outbreak in the state had been at Green Empire Farms in Oneida, where more than half of the 340 workers tested positive for COVID-19. "These are the people that we have deemed 'essential,' but we are treating them as if they're disposable," Kreyche says.

In a Philadelphia bookstore that temporarily closed due to the pandemic, Nate Kleinman spends his time packaging seeds and mailing them to some 200 "seed hubs" around the country. The operation involves hundreds of people. "The food system has been broken for a long time," says Kleinman, a farmer and activist. "This moment presents an opportunity to develop more local food economies that are at a smaller scale, where it's easier to truly be sustainable. And we need people to become less reliant on these far-flung, often global, supply chains."

In March, the nonprofit Kleinman co-founded, the Experimental Farm Network, launched the Cooperative Gardens Commission, a collective to help people grow their own food. Kleinman estimates that they have since distributed millions of seeds. "I really had no concept of how big this was going to get," he says. "We've been pretty overwhelmed by the response to it." The effort is a response to COVID-19, but it is also a way to change the food system, and one that can outlast the disease.

One person involved in Kleinman's effort is Ken Greene, who with his partner, Doug Muller, started the Hudson Valley Seed Company, in Accord, and is director of Seedshed, which promotes seed stewardship. He believes that seeds can address lots of interconnected issues. "Seeds are the foundation of our food system, and we don't think about them. We don't know where they come from," he says. "We have given up all of that control to a larger corporate food system." People can regain control by starting gardens or supporting existing ones. "Seed literacy is a big piece of creating accountability," he says. This leads to "seed sovereignty," that is, for people to have self-determination over who grows their seeds and how they grow them.

When it comes to food, no one should be counting down to a return to normal. "Normal wasn't working," Greene says. "This duality that we're experiencing now with two crises, the COVID crisis and the current anti-racism work that people need to engage in, are both showing us that the food system was not working for everybody."

Greene adds, "It was not working when you start to dig back and go deeper than just the food that's in front of you on your plate."

Vassar alum Max Kutner is a journalist in New York City and has written for Newsweek, the Boston Globe, and Smithsonian.

The Future Is Now the future is now farming food system