The Furniture of Wendell Castle

In a 1966 episode of the popular television show "To Tell the Truth," panelists ask three men questions designed to test their knowledge of woodworking and architectural history. Two of the three men are imposters, posing as a famous artist. The other is Wendell Castle, considered by many to be the founding figure of the American art furniture movement. At the end of the questioning session, the panelists guess which man is the artist. The program host asks, "Will the real Wendell Castle please stand up." A diminutive man seated in the middle, wearing circular glasses and a wry mustache, rises.

A recording of the episode is included in "Wendell Castle: Wandering Forms—Works from 1959-1979" at the Aldrich Museum of Contemporary Art in Ridgefield, Connecticut. It plays on the wall of a gallery filled with some of Castle's most famous and groundbreaking work. The video clip is included as a piece of ephemera, but it makes a few points. In addition to pointing out Castle was an artist with popular appeal, it leaves the question "Which man is the real Wendell Castle?" hanging in the air. Is Castle a sculptor or a designer? Can he be both? Does the distinction matter?

"Wendell is a great example of someone who was trained as a sculptor, came out of the fine arts, and made a very calculated decision to enter into the arena of furniture and furniture making, and brought to that a completely different perspective because of his training as a sculptor," says co-curator Alyson Baker. The objects on display at the Aldrich are organic and evoke animal forms. They swim with movement, but since they function as furniture, they're also practical. In order to be a desk, a form must have a flat surface for writing. In order to be a bench, a form must include a sitting surface. Baker also notes that the cross-disciplinary approach is in vogue today, in particular among artists who are looking toward design. "We're definitely in a time now when there is a great interest in cross over between different fields," says Baker.

"Wandering Forms" looks at the years of Castle's emergence as the founding figure of American art furniture. He wasn't destined for furniture. Born in Kansas in 1932, Castle received both a BFA and an MFA from the University of Kansas. He trained as a sculptor. One day, Castle was in the studio, building a box with shelves. One of his instructors saw him and denigrated the work as furniture. This exchange got Castle thinking that furniture could also be art. With this creative challenge in mind he created Stool Sculpture (1959). Although he conceived the work as a piece of furniture, Castle entered it in a juried show at the Nelson-Atkins Museum in Kansas City. It won the first prize. Says co-curator Evan Snyderman, "Lo and behold it was a chair, and no one knew."

Stool Sculpture, on view at the Aldrich, is a balanced and sinewy structure that begs interaction. Looking at it, you wonder, what would it feel like to sit on that perch? How fun would it be to climb onto that perch, rest your arms and feet on it supports, sit back, and enjoy the view? The piece won Castle the attention of the School for American Craftsmen in Rochester, New York. Castle took a position as the head of the furniture department and soon became one of the most sought-after furniture makers in the country. Snyderman says Castle was "one of the only furniture makers to focus on the sculptural aspects of furniture. He had a unique approach which in a way set in motion what we look at today as contemporary furniture in America."

Castle has stayed in the area. Just outside Rochester, in Le Roy, New York, the Wendell Castle Collection production line is made. Launched in 1998, the Wendell Castle Collection produces furniture designed by Castle and handmade by craftsmen in Castle's employ. The venture is aimed at bringing his sculptural vision to a wider audience and bridging the divide between art and furniture. The pieces can be purchased at select design showrooms in the United States and Canada.

Castle's forms are full of movement and volume, and suggest artists like Henry Moore and Isamu Noguchi were influences. But there was also a decidedly more low-brow inspiration. Castle uses a technique called stack lamination for building furniture. The time-consuming process involves gluing sheets of wood together, then carving it with a chisel as if it were a piece of stone. Interestingly, Castle was inspired to try this technique after he read a book about building duck decoys. The book is on display at the Aldrich.

Several of the pieces on view at the Aldrich are rarely seen. Considered one of the most important of these is Environment for Contemplation (1969-70). The form looks like a funky wooden igloo. Although not available to museum-goers, a door on the front of the form opens to reveal the piece is hollow and plush carpeted. The owner or participant could enter the environment, which acts as a kind of cocoon or a sensory-deprivation chamber. The participant can poke his head out an opening in the top. A light bulb on the contiguous tail comes on to indicate the user is inside, probably deep in contemplation. The piece is simultaneously furniture, sculpture, and a canny summation of performance art.

Desk (1967), also referred to as Silver Leaf Desk and on loan from the Racine Art Museum, is a substantial yet graceful form that, both in spite of and because of its beauty, you could imagine in use at an office. It's also cleverly self-referential. The elegant silver top sits on an arch that could be either a winged bird or a dashed signature.

Desk and Environment for Contemplation are two of the forms placed in the Project Space at the Aldrich. The double-height gallery allows viewers to appreciate the pieces from many perspectives, including the view from above.

Again, perspective on Castle is important. Evan Snyderman: "[Castle] has always been successful, and what's interesting now is, at 80, he's still at it and there's a new market growing for his work, which is the contemporary art world. Up until now, he's been collected by craft collectors, let's say, or some furniture collectors, and now the art world is getting turned on to Wendell because he's really more of a sculptor than he is a furniture maker. And not just that but a really great sculptor. So he's having a renaissance in a way."

"Wendell Castle: Wandering Forms—Works from 1959 to 1979" will be on view at the Aldrich Contemporary Art Museum through February 24. The curators will lead a tour of the exhibit on January 6 from from 2 to 3pm. Aldrichart.org; Wendellcastlecollection.com. 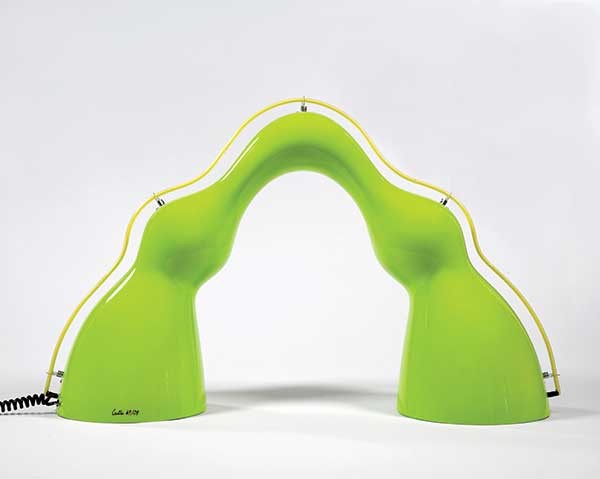