The Fungus Among Us

In recent months, we’ve learned a bit about edible wild plants and how to use more fruit species in our landscaping. These micro-local approaches to our food production are going to be an important part of how we reshape our consumption patterns in the coming years, and will have a large impact on the environment and economy if they are widely adopted. Having addressed plants, then—and leaving livestock out of the picture for now—there’s one other kingdom we should think about when we consider how much more good food we can easily grow or forage for ourselves: fungi.

Mushrooms are ubiquitous. Fungi do much of the heavy lifting when it comes to breaking down dead things and returning their nutrients to the soil so other things can grow; it’s not a stretch to say that we owe them our lives. We buy a lot of them, but mostly just one kind; US consumption is estimated to be nearly one billion pounds in 2009, but of that the vast majority will be of agaricus bisporus—button, crimini, and portobello mushrooms are all essentially the same thing. Tastier (and pricier) varieties are available—fresh and dried—in supermarkets, and gourmet stores offer such delicacies as morels, chanterelles, and porcini. But these varieties can easily reach $30 per pound, putting them out of reach for regular eating. And truffles are one of the world’s most expensive foods, leaving most of us to make do with infused oils in place of the real thing.

Another Kind of Gardening

Mushrooms offer excellent ways to add umami—the fifth flavor, a meaty, savory richness—to our cooking, especially if we don’t eat meat. Asian traditions have used mushrooms medicinally for millennia, and modern research is confirming strong anti-cancer and other beneficial properties in many species. Many of the most expensive and desirable varieties grow in the woods all around us, there for the picking, and yet almost nobody these days avails themselves of the free food in the forest; most of us fear wild mushrooms to the point where we think it’s not even safe to touch them (it is). This is not to say that there aren’t risks; there are. Some kinds can make you sick, and a few are fatal.

We can (and should) greatly expand the variety and quantity of the mushrooms in our diet in two ways: by cultivating our own and by foraging for wild species. Cultivation can be as easy as ordering an inoculated log online, watering it, and harvesting the shiitake or oyster mushrooms that burst forth. With a little more effort, we can start to incorporate mushrooms into our gardens and landscaping in easy, yet prolifically productive, ways. Andrew Janjigian is a mycologist and a staff writer for Cook’s Illustrated who lives in Cambridge, Massachusetts. He encourages everyone to give cultivation a try, saying “it’s just another kind of gardening.”

What we call “mushrooms” are the spore-producing fruiting bodies of much larger organisms that live underground and/or in rotting wood. The unseen network of fibers that makes up the main portion of the fungus is called the mycelium, and it is the mycelium that we cultivate in order to harvest the fruit. We do this by giving it what it likes to eat, which is usually wood in whole, chipped, or powdered form. Since many of us already use mulch and logs in and around our gardens, Janjigian suggests that we begin there. By inoculating the mulch and edging with desirable mycelium, we can produce luxury food in areas that are currently unproductive.

Janjigian’s favorite fungi are oyster mushrooms and winecaps. “Oysters will grow in just about anything, so they’re the best way to start.” Bags of inoculated sawdust are available online (see sources, below) and can be sprouted as they are or broken up to inoculate wood chips, newspaper, grain, or even telephone books. Indoors or out, keeping them damp is really the only requirement. As they use up nutrients and stop fruiting, the trick is then to harvest some healthy mycelium from the substrate and use it to inoculate a fresh batch. That’s really all there is to it; they can fruit in as little as two weeks—an eyeblink in gardening time. Winecaps (which aren’t for sale in stores but make for choice eating) like both soil and hardwood chips, so they spread freely in and out of the garden, requiring little care since they will move to new areas in search of more food. It’s an appealing notion to convert mulched garden paths into productive space, and since mushrooms fruit so quickly there’s no need to tiptoe around them while they grow: Just cut, eat, and repeat. 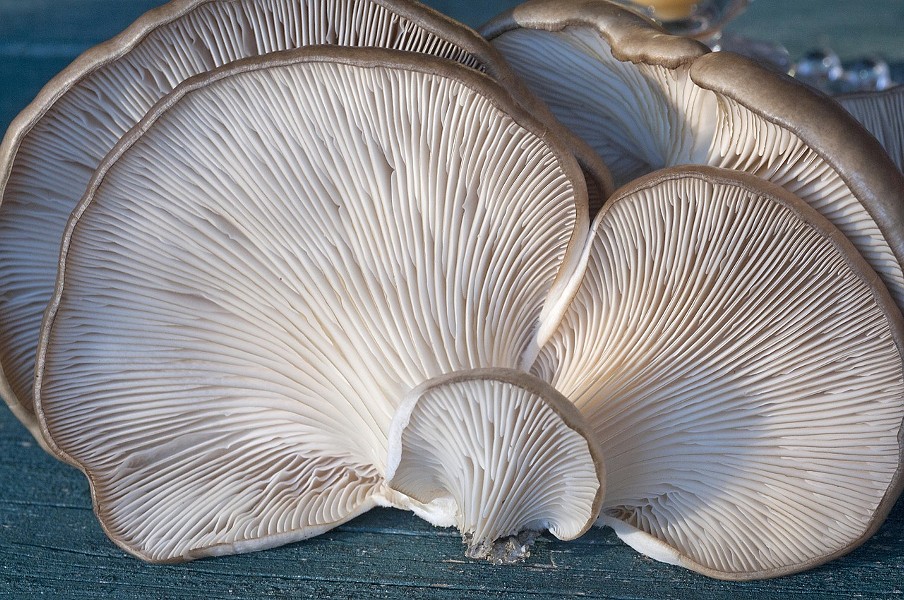 Growing mushrooms in logs isn’t much harder. Order a bag of inoculated dowel pieces, drill a bunch of holes in a hardwood log, hammer them in, and seal the holes with cheese wax (the waxing is optional, but helpful). Janjigian suggests using your own wood if you prune a tree; it’s important that the wood be green (freshly cut) from healthy trees with the bark intact to protect the wood from colonization by undesirable species. The ideal size is six to eight inches in diameter and about three feet long, for easy carrying. If you don’t prune trees, he recommends talking to your landscaper, arborist, or the person you buy firewood from. These same sources can also provide free or inexpensive hardwood chips for inoculating and then using for mulch. Oak and (unsprayed) fruit wood are best; evergreens like pine and spruce are not suitable and should be avoided, and it’s a good idea not to grow mushrooms too close to your woodpile, to avoid having it colonized.

The best book for people interested in mushroom cultivation is Mycelium Running (2005, Ten-Speed Press) by Paul Stamets, who also runs the website Fungi Perfecti, an excellent source for bags, plugs, logs, and kits for growing a wide variety of mushrooms. The book contains extensive information on techniques and ideas for creative incorporation of mushroom plantings into larger yards and gardens.

Janjigian extols the satisfaction of being able to grow such healthy, high-price fare with so little cost and effort, and to become more familiar with the least-respected kingdom of living things. To further deepen our respect and pleasure, and get our hands on some species that are hard or impossible to cultivate, he recommends foraging. “Find a local club, meet people and learn from them,” he says, “it’s all about collecting and practicing.”

Those interested in learning to forage wild species need look no further than the Mid-Hudson Mycological Association, which offers regular walks all season long in many beautiful parts of our region, as well as an annual winter mushroom dinner for members. Association webmaster and spokesperson Elmer LeSuer is eager to spread the word, using Facebook and the group’s official site to build the community. “There’s a bounty of wonderful food that people are missing out on,” he says, noting that “one walk with an expert is enough to learn to identify the easy ones.” (This assumes, of course, that they are there for the finding, which is where the use of “hunting” as verb of choice becomes clear.)

“It can be as complicated as real science, or as simple as picking raspberries,” LeSuer continues, encouraging beginners to come along on a walk and benefit from all the combined experience of the other members. One could be easily content just to hunt easily identified varieties like black trumpets and chanterelles—which happily happen to make the best eating— or to develop an expert eye over time. Either way, he invites everyone to “come out and play with us.” Janjigian recommends Stan Tekiela’s Start Mushrooming (2003, Adventure Publications) as the best introduction to the six unmistakable edible varieties in North America, but, like LeSuer, he cautions that people should always go out first with an expert and consult more than one book to verify any identification.

A recent association outing on a perfect September day in Napanoch yielded a bounty of tasty honey mushrooms in addition to a few hen-of-the-woods (maitake) and chicken mushrooms as well as interesting inedible varieties. The group wandered through the woods for about three hours, searching, chatting, separating, reconvening around an exciting find, and filling baskets with both edibles and other specimens (baskets are important because they help spread spores). The members are friendly, welcoming, knowledgeable, and enthusiastic. It’s hard to imagine a happier confluence of hiking, learning, and socializing. And where else will you get to say “Strobilomyces floccopus” in mixed company?

Some foragers contacted for this piece did not want to talk; they prefer having the woods to themselves, and expressed annoyance at being invited onto land to help educate the owners and find good patches, then never be asked back. If you have land, and want an expert to help you learn what grows there, common courtesy would suggest that you allow him or her to return from time to time; it’s a deep field, and the extra knowledge and experience you gain will be worth far more than a portion of the bounty. We owe it to ourselves to learn more about these essential, fascinating, and delicious organisms. Grow your own, or take a walk and start hunting. You’ll be glad you did.