The Fuller Building on Pine Grove Avenue is a time capsule for the City of Kingston’s many epochs—the days of the shipping trade, manufacturing, tech, then despondency, and finally now revitalization. The 2.2-acre site was home to the Hudson River Lumberyard from 1847 until 1906, when entrepreneur Isaiah Fuller built a factory there for his growing shirt company. The factory operated as the headquarters for the Fuller Shirt Company through the height of the nation’s industrial era, at its peak employing 500 people.

The textile manufacturer hung on through the Great Depression and the Second World War, then in 1956, the business was sold to the Stetson Company. When their attempts to branch out from hat business flopped, Stetson left a short five years later, and in 1965, the Fuller factory closed down.


For the past few decades, it sat vacant as the City of Kingston incubated, slowly hatching a plan to reinvent itself in the wake of IBM. Then in May 2017, the 67,000-square-foot building was purchased by architect Scott Dutton, a veteran of adaptive-reuse projects. “Architecture is one of few art forms that has burden of having to function,” Dutton says. “I’ve always been interested in thinking about the morphology of how buildings change and adapt over time, because how a building is seen as being right or appropriate depends a lot on who the user is.”

Paving the Way for Kingston’s Next Chapter

A graduate of the Pratt Institute, Dutton witnessed firsthand the early symptoms of Williamsburg’s hipster transformation, so he was primed to recognize them in Kingston when he moved here just over 20 years ago. His firm, Dutton Architecture, has championed the rehabilitation of many of the city’s large-scale industrial buildings, including the Lace Mill artist lofts and the Ulster Academy Lofts. 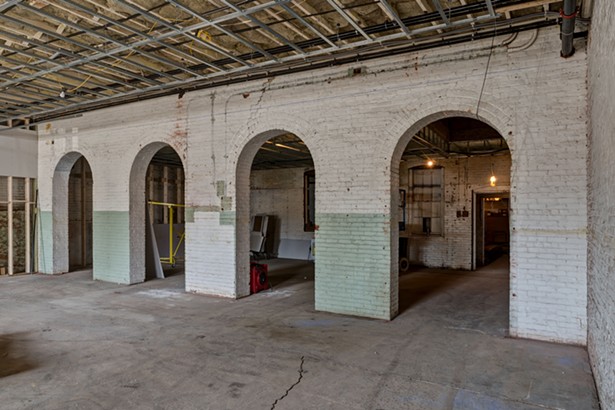 “The proximity to the city, the beauty of the Hudson Valley—it was absolutely obvious to me that the revitalization of Kingston was just a matter of time,” Dutton says. When he and his wife bought the Canfield Supply building in 2000, it hadn’t been used in over a decade. “It was literally raining and snowing inside. Pigeons were flying around,” he says. They petitioned the zoning board of appeals for permission to transform the 28,000-square-foot, c.1893 warehouse into live/work lofts, and succeeded in getting an exemption. (Dutton’s architecture firm and a six other businesses have offices there, and Dutton’s family also maintains a loft apartment there.)

“We were the first people to be allowed to live in Kingston’s commercial district,” Dutton says. The laws have since changed making it easier for mixed-use buildings like the Lace Mill and the Shirt Factory to exist, and Dutton’s work is largely to thank. “It’s important to have a diverse population and a mix of commercial and residential in order to have a sustainable city,” he says. “My hope is that this will continue and Midtown Kingston will be a destination not just a place that you drive through.”

The Fuller Building was one of the last unoccupied warehouse spaces in Midtown Kingston. “I kept trying to get someone to buy this building, so I could work on it,” Dutton says. “But no one would go for it, so finally I just bought it myself.” When he finally bought it, Dutton got straight to work petitioning the state and national parks departments to get the building added to the register of historic places.


For the past two years, Dutton’s team has worked to tear down non-historic elements of the building like the exterior vinyl siding and interior masonite and rebuild a new interior framework. These excavations have uncovered glorious brick archways, original shiplap siding, massive posts and beams, and a functional freight elevator. “The interesting thing about working on older buildings is that there is a moment in time when you can connect with each and every prior inhabitant of that building,” Dutton says. “Each of them has left their mark at some point.”

Anything being replaced, updated, or added to the building is being done in compliance with the guidelines of the historic registries. “It is an honorific designation, and they want to make sure we preserve history in a respectful way,” Dutton says. “So we preserve original elements that are intact and respect them.”


The new incarnation of the Fuller Building, which is nearing completion, is a suite of professional spaces for artists and makers, wellness practitioners, tech and design folk, and others in spaces ranging from 200 to 2,000 square feet. (And Dutton is keeping rent affordable at $1 per square foot per month.)

The main entrance will be on the side of the building at grade level with ample parking, and will include a spacious lobby, pop-up gallery/retail space, and a state-of-the-art acoustic performance space. The second floor will house all of the professional offices and studios.


The first tenants to move in was Found My Animal, the viral handmade pet accessory company, which moved in on July 2. At the beginning of October nearly a dozen other tenants were already confirmed including jeweler Kat Hammill of River Mint Finery, the Kingston Writers Studio, cookbook author Rebecca Miller Ffrench of The Upstate Table, several makers, a pilates studio, two graphic designers, and fashion designers.

The 8,000-square-foot third floor will be available for rent for events (like Chronogram’s 25th birthday party on 11/10!) or possibly to a long-term tenant.


When asked whether taking on this project felt like a big, hairy, audacious, goal, Dutton shrugged and said, “Our firm does a lot of this kind of work, so it’s kind of second nature to me,” then adding, “But I do feel very fortunate to be able to play in this sandbox.” And what a sandbox it is.


You can check out the newly minted Fuller Building in all its restored glory on November 10 during Chronogram’s 25th birthday party.

Rebirth of a Landmark: City Winery Opens in Montgomery