Serbia Surrenders Only to God" reads the inscription on an art medal produced by Serbian-Americans in Providence, Rhode Island, in 1917. On the front is a helmeted female warrior, in profile, piously clutching a sword whose hilt resembles a cross. The medallion, which raised funds for the Serbian War Relief Fund, is included in "The Art of Devastation: Medals and Posters of the Great War" at the Lehman Loeb Art Center of Vassar College, beginning January 27. "The Art of Devastation" marks the centenary of America's entry into World War I.

The 117 medals are arranged chronologically: The first is a portrait of German Emperor Wilhelm II from 1910; the last honors the Treaty of Versailles. While soldiers clashed on the battlefield, sculptors fought a separate war in their studios, searching for a fatal image to demoralize the enemy.

As the war dragged on, with its staggering losses, the heroic early images, such as Henry Nocq's Gallia Repulsing Enemy Forces—depicting a goddess in armor battling a six-headed dragon with the Kaiser's face—gave way to such scenes as Weary Soldiers by Paul Roger-Bloche. Dead Soldier on Stretcher by Lissy Eckart—one of the few women medalists in the show—features three stylized stretcher bearers, stooped under the weight of a corpse. Each war begins with soldiers marching off to slay demons, and ends with them killing frail humans like themselves.

"Many of the medals have satirical subject matter, and graphic satire is one of my favorite special areas," explains Patricia Phagan, co-curator of the show. Ludwig Gies' cast-iron medal, Wall Street Profiteering from the War (1917), depicts a sea monster wearing an Uncle Sam hat, his mouth full of coins, emerging from the ocean near New York City. Paul Manship, a well-known American sculptor, created The Foe of Free Peoples (1918), a bronze portrait of Kaiser Wilhelm wearing a necklace of human skulls—with the caption "His Rosary." (Hanging from the death heads is an Iron Cross.) "The Art of Devastation" could also describe the devastating wit of the artists. 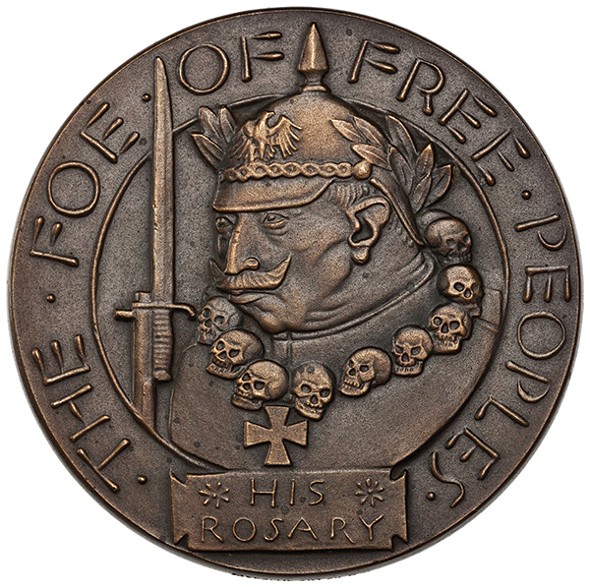 The art medal is to sculpture what the print is to painting: a mass-production technique allowing middle-class patrons to own fine art. Invented by late-medieval sculptors in imitation of Roman coins, these medallions reached their height of popularity in the early 20th century—although they are largely forgotten today. "During World War I, tens of thousands of different types of these medals were produced on both sides, consuming scarce metallic resources," co-curator Peter van Alfen observes. Some medallions were sold to raise money for the war effort.

The works on exhibition were minted in Belgium, France, Germany, Austria-Hungary, Italy, the US—though England is strangely absent. The majority of the pieces are in a Beaux-Arts style that strikes us as quaint today. It's no longer fashionable to personify Liberty as a woman in a billowing gown holding an Aladdin's lamp in one hand and an olive branch in the other. Often the inscriptions are in Latin. Though Cubism began in 1907, Modernism is absent in these medals—except for the Teutonic talent for savage caricature, which would later manifest in the German Expressionism of Max Beckmann and Otto Dix.

The show also includes 14 World War I posters, mostly from the Museum of Fine Arts in Boston. "The Art of Devastation" originates at Vassar, and will not travel. An extensive catalog has been published by the Loeb Center.

"The Art of Devastation" will be exhibited at the Lehman Loeb Art Center of Vassar College in Poughkeepsie from January 27 to April 9. (845) 437-5237.