The Fluid Beauty of Hydrangeas

Briana Davis and Eli Joseph-Hunter's lives overlapped when they were students at Bard College (Eli graduated in 2000; Briana in 2003), but they came to be a couple years later, not long before they both were working at the Phantom Gardener in Rhinebeck. They share having a precocious talent for horticulture; he got his first nursery job when he was 14, and she founded a CSA operation when she was 24. In 2005, Davis moved to Cornwallville to be with Joseph-Hunter, and in 2007 they put up their first greenhouse, initially growing uncertified organic vegetables and herbs for Phantom.

In 2010, they left Phantom to focus on having a family and on Greene Bee Greenhouse, which is many things at once: a source for organically grown vegetable, herb, and flower seedlings; a place where you can find a spectacularly diverse array of native and benign exotic ornamental perennials, trees, and shrubs; and the site of an extensive young arboretum that Joseph-Hunter conceived back when he bought the land in 2000. Greene Bee is also a high-end landscaping enterprise through which the couple works with clients who are also passionate plant collectors seeking unusual specimens.

Greene Bee is a fixture at the Rhinebeck Farmers' Market on Sundays—selling, among other things, more than 40 varieties of tomatoes. It is also a destination nursery in Cornwallville in Greene County, set amidst an arboretum that serves as a teaching and demonstration tool. While you are there, you may see the couple's two children, six-year-old Celia and one-and-a-half-year-old Meiko.

Davis and Joseph-Hunter follow a wide range of ecologically mindful practices. While they are not certified organic, everything they produce themselves is grown organically. They heat their greenhouse with wood, use compost instead of synthetic fertilizer, and refuse to sell plants known to be invasive. Friends keep honeybees on the land for them.

This passion for land stewardship comes with their equally fervent zeal as horticulturists. "We live and breathe each plant, even when we're completely overwhelmed and tired," Joseph-Hunter says. "Recently we were up until 11pm, trying to figure out what this beautiful, possibly native wildflower I found in a client's garden is," Davis says. "We want people to become as obsessive as we are, have success, and enjoy being in the garden."

Joseph-Hunter brings his 25-plus years of experience to horticultural presentations and workshops. On August 20, he will give a workshop called "Hell Yeah, Hydrangeas!" at Greene Bee (see website to register). He says, "Hydrangea flowers are very fluid; they go through their bloom cycle with a great transition of colors. The flowers are always attractive, and they fade with great dignity."

"People don't realize how many great, easy-to-grow species of hydrangeas there are that do well in our climate," he says. "Many people have one image that comes to mind when they think of hydrangeas, that of the bigleaf type (Hydrangea macrophylla) with the big blue or pink spherical flowers. They see them in photos or at the Cape, but those are actually the hardest to grow here." 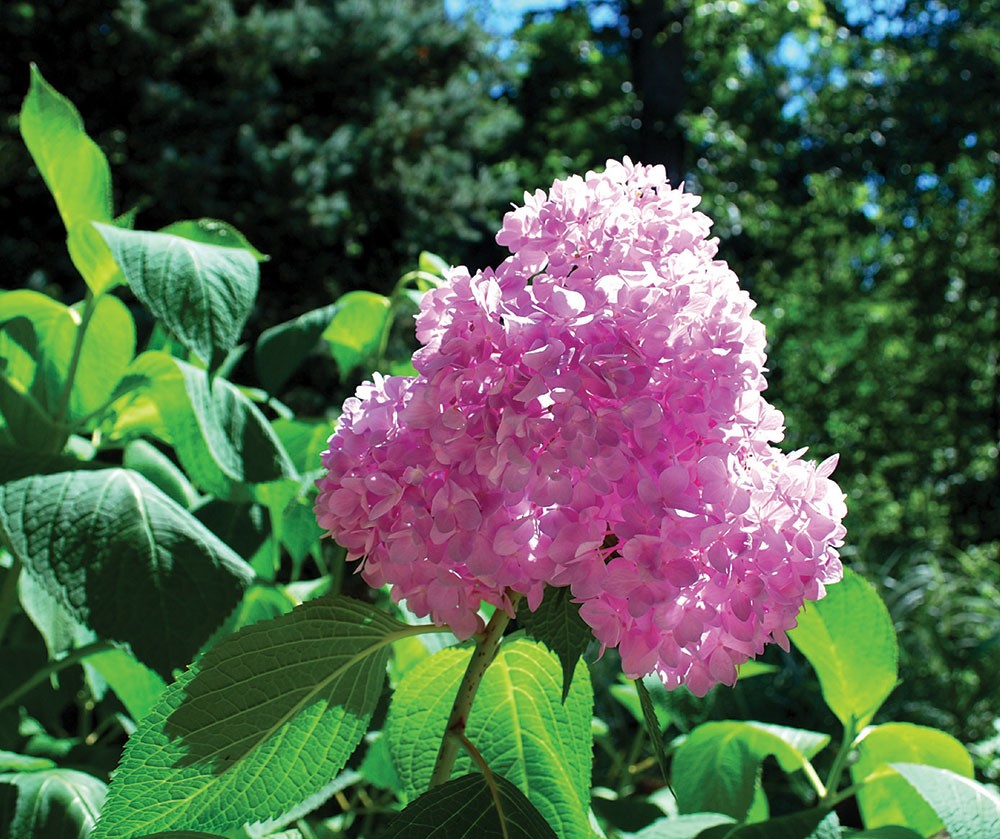 That's because the bigleaf hydrangeas are cold-hardy in the Hudson Valley from the roots down but not necessarily from the roots up—and, they bloom on last year's wood. "A lot of winters will kill the plant down to the ground," Joseph-Hunter says. "It rebounds and you get a nice, new mound of foliage, but you lose the flower buds."

However, the good news is that, starting in 2004, plant breeders will begin coming out with cultivars of the bigleaf hydrangeas, like Endless Summer, that bloom on new wood as well as old. "There's a whole slew of these remontant (reblooming) types now," Joseph-Hunter says. "However, some people are still having some trouble getting them to bloom. I suspect it's a phosphorous deficiency in the soil." He recommends amending the soil with organic sources of phosphorous, like rock phosphate or bone meal.

The bigleaf plants have blue or pink flowers, depending on the acidity of your soil; they are pH litmus test plants, says Joseph-Hunter. "Acid soil leads to blue flowers, and alkaline soil leads to pink," he explains. Besides using the right remontant cultivar of the bigleaf hydrangea, he recommends putting them in a place where they get shade for the hottest part of the day. "If it's over 85 degrees and they're getting full sun, they look like they've been steamed every afternoon," he says.

Joseph-Hunter teaches about five other main species of hydrangeas that are easy to grow in our climate, ones that give extended flowering time and nice form and can be readily found in the nurseries. He says that between the early-blooming vine form of hydrangea and the myriad shrub cultivars, you can have hydrangea flowers from May to November. For best performance, they all prefer soil high in organic matter, but their sun/shade and soil moisture tolerances vary.

The climbing hydrangea vine (Hydrangea anomalis var. petiolaris) is the first to bloom, with white flowers beginning in May. It's self-clinging by way of tendrils, so you don't have to train it. It likes part shade and is slow to get started, but once it gets going, it grows luxuriantly, as high as its supports will allow. It has deep dark green leaves and interesting peeling winter bark. "One consideration is that it can invite water into structures," Joseph-Hunter says. "So, rather than putting it right against your house, it's better to put it on a pergola or other structure just off the house."

Among the smooth-type hydrangeas (Hydrangea arborescens), the most commonly known cultivar in the trade is Annabelle, with a tremendously long-blooming, white mophead flower that starts out green. "The Annabelle types can take sun or shade and among the driest soil," Joseph-Hunter says. "They're very tough and bloom on new wood, so you [or deer] can mow them down in the early spring and they will regrow and still bloom. Every spring, before new growth comes out, we cut them to six inches from the ground." Most varieties of this type of hydrangea will mature at three to four feet tall and wide. Among the many other cultivars available are Invincible Spirit, with pink flowers, and a really unusual one, with dissected dark green leaves, called Green Dragon.

The "paniculata" types of hydrangea (Hydrangea paniculata) are the ones that Joseph-Hunter and Davis use the most. Their huge panicle-shaped flower heads bloom on new wood, so you can cut them back hard in the spring. On the extra-meritorious cultivar Limelight, the flowers start out lime green, then fade to white, then to pink, and then to tan. They get to be 12 feet tall on the Greene Bee property. The couple also likes Quick Fire, which blooms a solid month ahead of other paniculatas and has gorgeous apricot-orange fall foliage color and reddish stems. It is easily available in the trade along with the more compact cultivars Little Lime, Little Lamb, and Little Quick Fire. "The paniculatas can take shockingly wet soil and sun or shade, even heavy shade—they are incredibly adaptable," Joseph-Hunter says.

The sawtooth hydrangeas (Hydrangea serrata) are pH-sensitive like the bigleaf ones, and the blue or pink flowers come in mopheads or lacecaps (the latter are more flat and airy but still quite showy). "The sawtooth hydrangeas aren't as tough as the Annabelle types and the paniculatas, but they are still successful in our area," Joseph-Hunter says. Among them he favors Spreading Beauty and Bluebird.

Lastly, we have the cold-hardy, stately oakleaf hydrangeas (Hydrangea quercifolia). The foliage is shaped like oak leaves and gets tremendous fall color, but they also have beautiful panicle-shaped white flowers that fade to pink. They can grow in sun or shade; indeed, Joseph-Hunter likes to plant some in heavy shade, to force extra-big leaves. "You won't get as showy a flower display, but you will get a beautiful fall effect," he says. He notes that oakleaf hydrangeas bloom on old wood and from the apex, so if you get deer or rabbit browse on the tips or winter breakage to the brittle apical stems, you will lose flowers.

On the deer-proofing tip, Joseph-Hunter says, "No hydrangeas are bulletproof for deer. There's always an example of some herd eating some plant. We recommend you protect new plantings by fencing them in or spraying them with organic odor repellent for at least the first season."