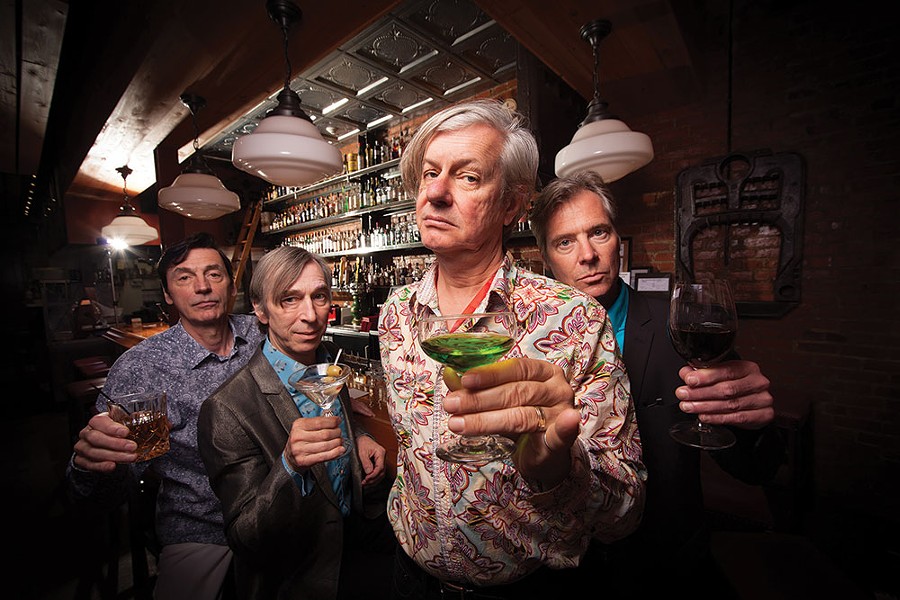 Other than the Rolling Stones, few bands have kept the party going longer than the Queens-spawned, self-declared kings of "super rock," the Fleshtones. Co-founded in 1976 by guitarist Keith Streng and singer/organist/harmonica man Peter Zaremba, the group played their live premiere in May of that year at CBGB, and their high-energy hybrid of 1960s garage rock, 1950s R&B, and shout-along '60s soul made them faves there and at other early punk hotspots. After a 1979 single on the revered Red Star label and the addition of Troy-born drummer Bill Milhizer, they signed to IRS Records for their 1980 debut EP, Up Front, and 1981's classic Roman Gods (from 1984 to 1987, Zaremba hosted MTV's "IRS Presents the Cutting Edge"). To date, the band has released 22 official albums (2016's The Band Drinks for Free is the newest) and had a string of bass players that's included Chronogram contributor Robert Burke Warren and his fellow Hudson Valley locals Fred Smith of Television and Andy Shernoff of the Dictators; Beacon's Ken Fox has held the position since 1990. Although the group has yet to attain the commercial heights they deserve over here, they're worshipped as garage deities abroad, especially in Europe, which is where they were when Zaremba answered some questions via e-mail. The Fleshtones will perform at Quinn's in Beacon on February 5 at 9pm. Tickets are $15. (845) 202-7447.

You guys celebrated your 40th anniversary last year. What thoughts and feelings come up for you when you consider this milestone?

Wow, that 40th anniversary kinda sneaked up on us. There's no secret when you are doing something that you really like. If we had been into rock 'n' roll for the limos and glitter, like a lot of people, we would have quit a long time ago. As it is, we are just hitting our stride about now. I know I'm finally getting the hang of this singing thing and people tell me I've shown marked improvement on the keyboards.

To many, you guys are the ultimate American party band, total fun—the irony being that, like so many other great American bands, you're more popular overseas than you are at home. Many foreign audiences, especially those in Europe, just seem to "get it" and are able loosen up more. What are your theories on this?

We'll take being the ultimate anything, and the ultimate American "party" band isn't bad. Despite what the English may think, rock 'n' roll is an American form—its lifeblood comes from this country. And who wants to be a drag at parties? Not me. We're in A Coruña, Spain right now. We played to 150 people on a Monday night, packed a small (but essential) club, and everyone left sweaty and happy. We do strike a chord with audiences in certain countries. I think it's our emotional quality, which doesn't need words to be felt. In Europe, rock 'n' roll is viewed as music, and its practitioners thought of as artists. Who would have thunk it? Not us when we were starting out.

Speaking of overseas audiences, you guys just got back from your first tour of China. What was that like?

China was a revelation, in so many ways! I really recommend a trip to China to everyone, just to get a feeling for the people, who are quite open and very accepting. Unlike other tours, on this one we had lots of time to meet people, mostly in Shanghai, and were even invited to a school to teach fifth graders about being in a rock 'n' roll band. They all took the time to learn "Blitzkrieg Bop" by the Ramones so they could sing it with us! I can't wait to return to China, but there's something special about Beacon, too!

The records you've released in the last few years have been some of your best. Are you expecting to still be doing this when your 50th anniversary rolls around? What do you think that will be like?

Thanks, I agree completely—the new albums just keep getting better. Keith [Streng] points out that that's another reason that keeps being in the band fun and engaging. It's not like we're still touring on Roman Gods. A lot of bands are doing stuff like that, and that makes them sort of "oldies" bands. As for the 50th anniversary, I hope we still tackle the stage and the studio with the same energy as now; otherwise, we'll hang it up. No, wait, I'm not making any promises about quitting. After all, look at the Stones—their new album is really good. And I've never seen the Stones live. Maybe I'll wait until they get better!