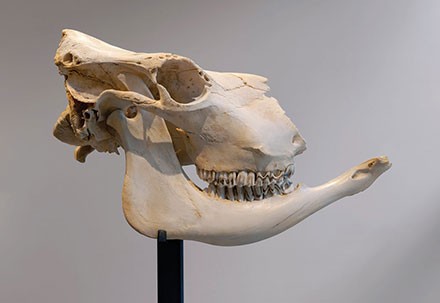 "I have learned that what we think is in large measure a function of where we think," writes Mark C. Taylor in Recovering Place: Reflections on Stone Hill (Columbia University Press, 2014). Taylor, a theology professor at Columbia University, is co-curator of an exhibit at the Clark Institute in Williamstown, Massachusetts, inspired by his book. The show will run until October 10.

What is Stone Hill? It's the hillside where the Clark Institute—all 140 acres of it—is located. "Sensing Place: Reflecting on Stone Hill" consists of two rooms in the Clark's Lunder Center. One offers a backward chronology of Stone Hill, beginning today and moving back 500 million years to a time when clashing tectonic plates formed a range of mountains more than 14,000 feet high—taller than the Rockies! Humble Stone Hill was once one of them. The second room displays 12 objects, each chosen by a person connected to the locality. Accompanying each item is a statement by its "curator." Novelist Jim Shepard, who teaches at Williams College, selected a 19th-century rifle: "This was John Barney Wright's gun, modified for bear hunting. Barney lived on Henderson Road. Most bears he caught in traps and clubbed to death. But around forty of the 100 that he killed were likely killed with this rifle." Elizabeth Kolbert, author of The Sixth Extinction, chose soil monoliths extracted from four spots on Stone Hill: a hemlock forest, a deciduous forest, a hay meadow, and a cornfield. These 18-inch samples reveal the radical difference between cultivated and uncultivated soil. Dan Snow, an environmental artist, built a stone wall commemorating the hedgerow obliterated when the Lunder Center was built in 2008.

The most incorporeal items are five sparrow songs (chosen by ornithologist Heather Williams). These musical snippets appear both as sonograms—vaguely resembling Kandinsky etchings—and as recordings triggered by an electric eye.

Anything in an art museum becomes infected with aesthetics—even the fire extinguishers and exit signs. The 66-foot-long surveyor's chain, roughly a century old and selected by Patricia Leach of the Williamstown Historical Museum, struck me as a delicate art installation.

A slideshow features Mark C. Taylor's sculptures, which are installed on Stone Hill. Some are large steel works based on the signatures of Hegel, Kierkegaard, and Nietzsche. (The Nietzsche piece uses the "D" in "Dionysius"—the pseudonym Nietzsche employed in the last years of his life.) None of the sculptures exactly replicate the original signatures, but the loose fluidity of Victorian handwriting inhabits them, giving the metal a heroic flourish.

Years ago, each village had its own story—but we are losing those stories today. As you travel on a bus, every town is a reordering of the previous town—the Dunkin' Donuts, Lowe's, KFC, and Staples reshuffled, like a deck of cards. Besides, you're too busy playing Candy Crush on your phone to really notice. "Sensing Place" addresses this "dematerialization" of the world by examining the actual spot on which the show stands.

After the museum closed at 5pm, I walked up the hill and immediately stumbled upon a new hiking path named after Carl Reidel, a beloved ecology professor at Williams College. A rainstorm had just passed, and drops of water were still pattering from branches above, adding percussion to the quiet songs of birds. Everything smelled like rich New England soil. I stood in the forest, contemplating the last 500 million years of Stone Hill's evolution. "Sensing Place" had succeeded! I had escaped the museum and found the rapturous forest.

"Sensing Place: Reflecting on Stone Hill" will run until October 10 at the Clark Institute in Williamstown, Massachusetts.