For years, Brooklynites Rosey Ott and her husband Anthony Lanci spent their weekends in the Hudson Valley, going to different towns each time in search of a hike and lunch. They would pack what they found to eat to enjoy with a beer at the top of the trail. In their constant hunt for provisions, they developed a dream of leaving behind the grind of New York City and opening a market in the Hudson Valley that offered products from all their favorite local makers in one place. COVID-19 gave Ott and Lanci that “one day” that they were hoping for, albeit sooner than expected.


Lanci, a chef turned restaurant consultant, built his own business for five years, only to have it go up in smoke when the pandemic hit. The couple felt that they had no choice but to start over, and so they packed their things and moved upstate to begin anew in the town that they had most gravitated towards on the weekends: Cornwall.


Enter The Farmhouse Market, a locally sourced market on Cornwall’s Main Street, which acts as a hub for products from local farms and establishments in the Hudson Valley. They carry fresh produce, meat, cheese, baked goods, beer, cider, wine, dry goods––even prepackaged charcuterie boards that hikers can take with them up to Storm King mountain for a summit lunch, just like the ones Ott and Lanci used to put together for themselves. The goal for the market was “to do what we do for ourselves for other people,” Ott said. Ott and Lanci enlisted the help of their best friends, Brittany and Anthony DeVito, to set up shop. They all grew up in the same town on Long Island together. Ott met Brittany DeVito in sixth grade, and they’ve been best friends since. When Ott and Lanci called the DeVitos about their idea for the market in a lighthearted manner, the DeVitos took it seriously––they called back the next day to say they were all in. The four spent most of last summer upstate together, calling Hudson Valley farmers and establishments to build sourcing connections while their kids played together outside. It was a much-needed respite from a year of chaos.


It didn’t last. Ott can barely remember the first few days of opening the market because of how busy she was. Ott and Lanci have a toddler, Leona, whom they had to take care of during the opening in September. Without any child care or employees, they just “jumped right in,” without knowing half the things they would have to do. They knew it was a risk opening in the middle of the pandemic and they didn’t know quite what to expect, but there are now customers “nonstop” according to Ott, and they’ve hired two employees.


The couple welcomes the buzz, which has increased with the warmer spring weather. Lanci takes orders and makes the sandwiches, the market’s bestsellers, all of which are named for their favorite hiking trails in the area. He’s been working in kitchens since he was 15, but for Ott, a speech-language pathologist, the work was new. She orders food, stocks shelves, does marketing tasks, and plans with the town of Cornwall. Brittany and Anthony (the latter of whom they DeVito) remain in New York City, managing social media and finances respectively. Even Leona, who is all of two years old, helps out by greeting customers at the market. When she gets tired, she naps upstairs in the room that was meant to be an office space but is now home to all of her toys. 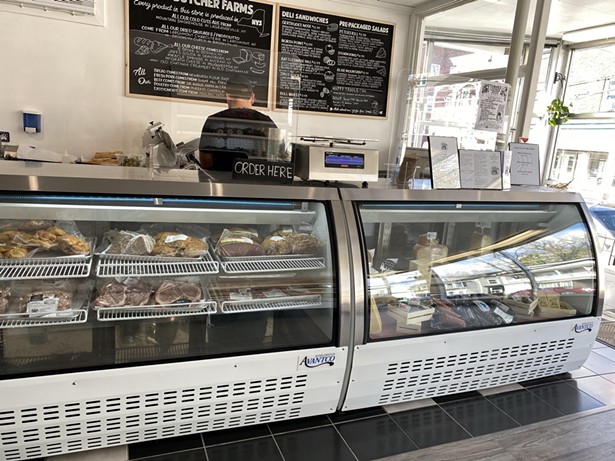 Ott and Lanci imagined The Farmhouse Market as a second home for their child. When she’s older, they hope she will make the habit of swinging by the market to say hello after school before going to their home in town. They hope that their burgeoning business will provide a supportive force for the family––and maybe it already has.


Lanci worked 80 hours a week in New York City, sometimes rising before Leona woke up and returning home after she went to sleep. Now he can see his daughter whenever he wants, easily able to check on her upstairs at the market during the day. Ott feels that they’ve “set their roots down” in the Cornwall community and invites both locals and city dwellers to come by. She recommends the charcuterie board––it’s her personal favorite.

Chef John DeLucie to Open Merchants Social in Hudson in May