"It's because our house is red," explains Ana Claudia Schultz of the occasional creative differences that arise between her and husband Aaron Smyle. Born in Brazil, Schultz is an interior designer who focuses on personal dynamics to create adaptable spaces tailored to residents' particular personalities. Smyle is a tax accountant with a variety of clients, including creatives, restaurants, and breweries, who aspires to educate and empower through his work.

Set on a grassy hill above the Hudson in Hyde Park, their Mid-Century Modern home enjoys sweeping views of the flowing river and the wooded bank beyond—a soothing counterpoint to the fiery 4,000-square-foot dwelling. Purchased sight unseen in 2016 and originally meant to be a weekend home, the `60s-era five bedroom, three-bath home required a total gut renovation. However, the ensuing collaboration between the extroverted and friendly Smyle and the intuitive, empathic Schultz proved completely combustible. "She has an eye for design and I have a bit of creativity," says Smyle. To do it, the two entrepreneurs focused on their shared interests—their mutual love of the Hudson Valley's natural beauty and its rich supply of local artisans. Combining each of their individual styles, they then added a dash of Mid-Century Modern design and the occasional homage to the home's previous owners. Together, Schultz and Smyle have created an airy, harmonious home from an eclectic variety of contrasting elements—a vibrant space that is more than just the sum of its parts. 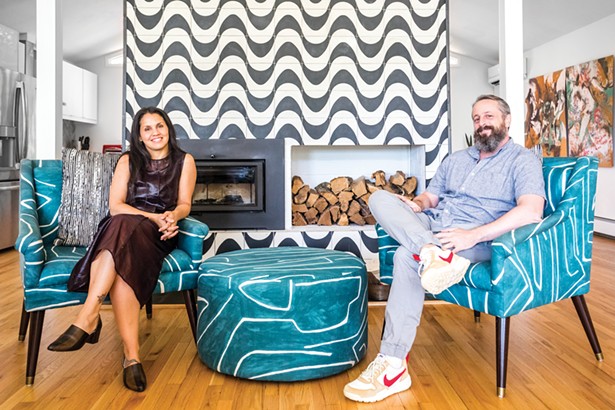 That Time We Almost Never Met

Both Schultz and Smyle were raised in Miami and went to the same high school—a place where they never actually crossed paths. "I knew his sister," says Schultz. "I ended up rooming with her in college. I'd gone to his childhood home, and met his parents and even his pets, but I'd only heard about him." After college, both Smyle and Schultz made their way to New York City where, a few years later, Smyle's sister invited Schultz to her brother's annual Christmas party. (Smyle has a yearly tradition of wearing different outfits of contrasting colors and patterns. "It may not seem so when I put it together out of the closet," he explains. "But it always just works.") Their chemistry was evident and the two were soon an item.

After a few years of living together in Brooklyn, they began searching for a weekend home outside of the city. "I wanted a mountain house because I love nature and the change of season," explains Smyle. "But, being from Miami, I also love the beach." Beyond their geographic requirements, they were open. "We weren't looking for any particular type of architecture or style," says Schultz. "We just wanted something with character."

The two searched everywhere from the Poconos to Windham, until a weekend at a bed and breakfast in Beacon convinced them that the eastern bank of the Hudson, with close proximity to both train and river, was just right. They first found a country style home they liked in Hyde Park, but the deal fell through. However, they'd discovered the right neighborhood even if they hadn't found the right house. 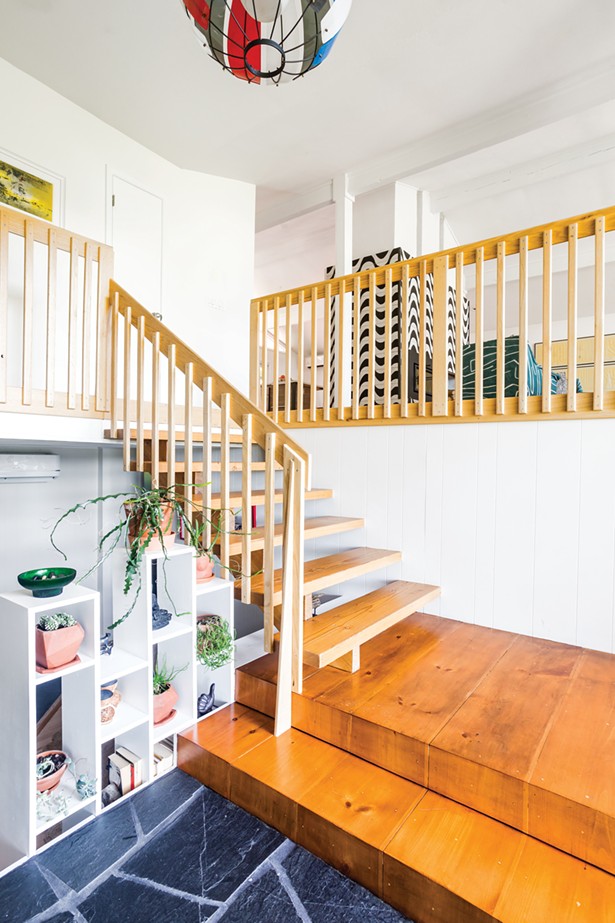 When a Mid-Century Modern nearby became available, they made an offer immediately, without ever setting foot inside. "We knew we would have made it work no matter what," explains Schultz. "We would implement our personality into the space—we knew we'd put us in this house." Smyle was sold on the location. "I knew it had that," he explains of the adjacent Hudson, an unobstructed view of which can be seen from almost every room in the house. By November 2016, it was theirs and they began their renovation.

Facing the Hudson River, the home's split-level front entrance is flanked by a wall of windows. To maximize the home's stunning entrance, the couple removed the original front door and replaced it with a modern window panel door to add more light. They also cleaned up and landscaped the ascending front pathway with new plantings. Upstairs, the home's large living room originally had wood-paneled walls and vaulted ceilings, with a view through sliders to the river. They lightened up the space by painting the walls white, refinishing the oak floors and replacing the windows throughout. They also rebuilt and expanded the adjacent front deck. 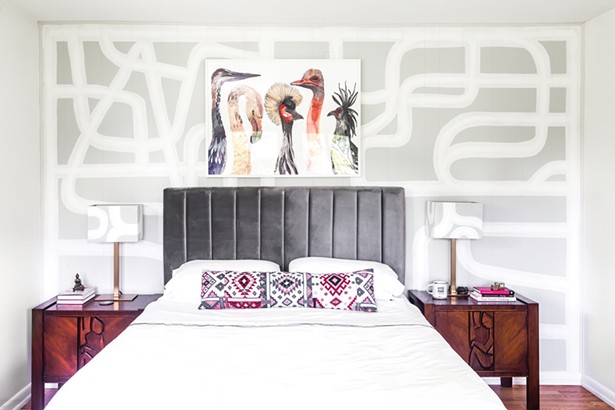 To capitalize on the river view, the couple removed the stone walls flanking the central fireplace and separating the living room from the kitchen. (They repurposed the stones as a low wall bordering the entranceway and a decorative driveway island.) They reframed the stripped-down central fireplace with black-and-white cement Rio tiles by Clé Tiles (inspired by a trip the couple took to Copacabana Beach in Rio De Janeiro), then added a fireplace insert and slate tiles below.

Freshly opened to the rest of the house and enjoying a new view of the river, the dated kitchen also required an update. They removed the linoleum floor, outdated cabinetry, and appliances, and even covered a single backdoor, but left sliders leading to the backyard and original back deck. The couple further expanded the space by removing a wall between the kitchen and dining room, and then added a central island. They installed stainless steel appliances and quartz Pental countertops along the kitchen walls, as well as the island. A Moroccan Zelliga beige-tiled backsplash, also from Clé Tiles, lines the back wall and offsets white lacquered Ikea cabinets above and below. "Now, we can sit almost anywhere in the house and we have a view," says Smyle. 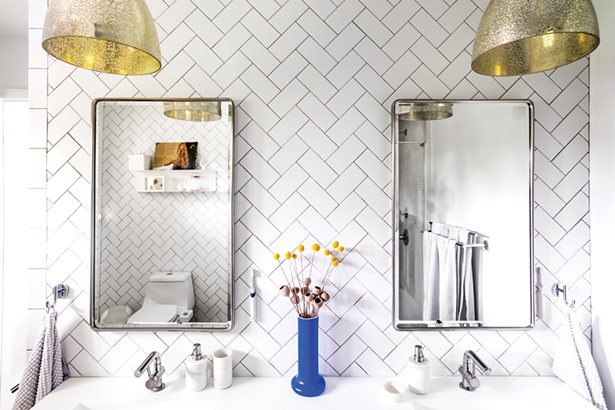 Clash of the Patterns

Upstairs, a wing of three bedrooms was redesigned with similar flair. At the end of a long hallway, the master suite looks out through front facing windows to the Hudson. Here the couple's love of pattern, texture, and design is evident. They commissioned Red Hook artist Rowan Willigan to create a custom modernist, geometric mural for the master bedroom, as well as matching bedside lampshades painted with the same white on grey motif. "We placed the bed so when we open our eyes we see either the Japanese maple in the summer or a full view of the river in the winter," says Schultz. They also refinished the master bathroom with an eclectic mix of tiles, adding color and texture throughout. Facing the back of their one-acre property, a corner bedroom (now used as a TV room) looks out onto large, stately walnut trees and a wide lawn. The couple enlarged a back window to add light and more views. A third bedroom is used as Smyle's home office.

Down the front staircase, the couple reconfigured the ground floor to accommodate their extended family. "The goal is to make this a family house," Schultz says. To that end, the couple captured space from a downstairs laundry to create a large guest suite with a full bathroom for visiting family. They finished the guest room with dark-toned wallpaper, and the bathroom features a mix of black, white, and terra cotta-toned tiles.

Central to the downstairs, the previous owner's in-home psychology office was converted to a large family room, with rectangular windows offering views of the river. To achieve a space that is the right balance of expansive and intimate, they tore out carpet and built-ins, added some structural beams, and then painted the space white. They also created a "family wall" at one end of the room with pictures of their parents and siblings. "This is a true family room for us," says Schultz. "We'll just add more photos as time goes by." 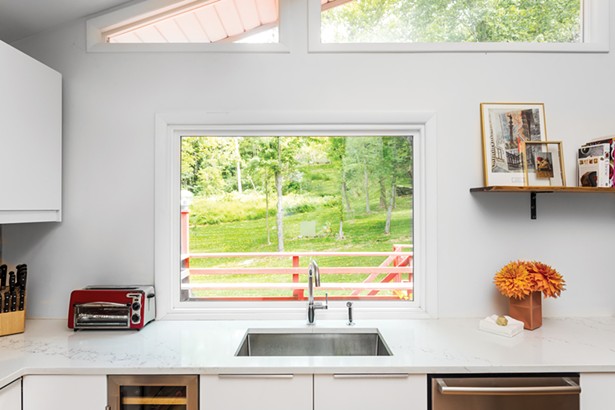 The entire renovation was completed by August of 2017. "We had a deadline," says Schultz. That summer they got married in the front yard of the house and were able to host their family and friends. Smyle even gave house tours during the reception.

Their design-based collaboration has been so successful it inspired them to not only to take up Hudson Valley living full-time, but also embark on another creative venture. This autumn they officially opened the Beck—a combined gallery and coworking space in downtown Rhinebeck. Dubbed as "a new kind of creative hub in the Hudson Valley" the space will showcase local makers and artists in its storefront window while also serving as upstate offices for the two. Like the design of their home, the hope the creative combustion at the heart of the Beck will produce something more than just its disparate parts. "It's more than a space," explains Schultz. "It's a concept—really it's about creating community." 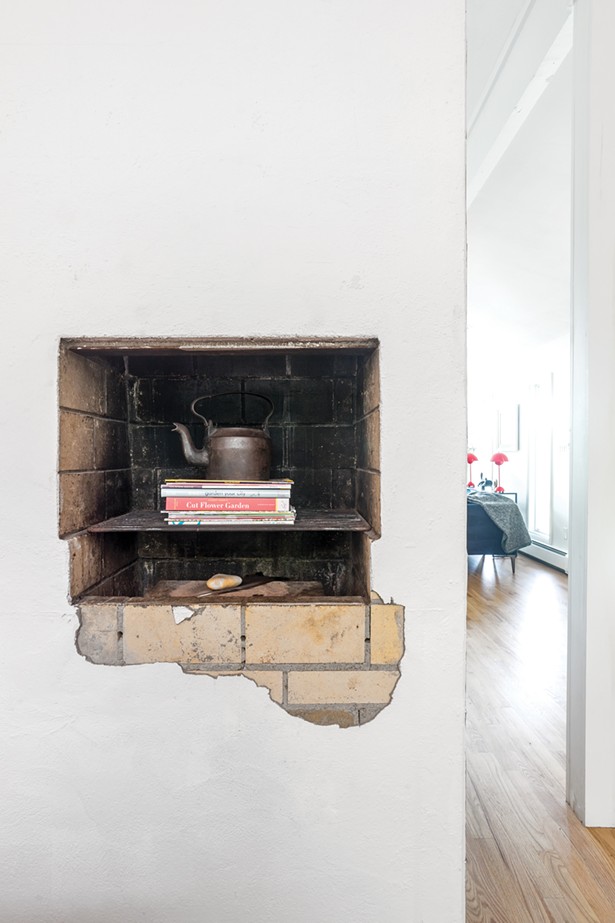