July 21 was the application deadline for the launch of Governor Andrew Cuomo's Excelsior scholarship program, widely hailed at its January announcement as the "first" free tuition program to include four-year college in the United States. (California offered residents tuition-free public postsecondary education until 1982, as did CUNY until 1976.) Side by side with Senator Bernie Sanders, a vocal advocate of free postsecondary education who included it as a cornerstone of his presidential campaign platform, Cuomo announced that since college was now as necessary as high school, he wanted to be sure it was available to every family.

The first round of Excelsior scholarships, rolling out this year, will exempt families making under $100,000 a year from the $6,470 tuition portion of a SUNY price tag or the $4,350 to $4,800 tuition at a community college. By 2020, the program will have expanded to cover those making under $125,000, or roughly 80 percent of all families in New York. Initial estimates from SUNY suggested that 80,000 current students—about 20 percent—fit the criteria. Excelsior funding would kick in to cover tuition expenses not covered by funds from federal Pell grants or monies from New York's Tuition Assistance Program (TAP).

"I endorse the Excelsior Scholarship Program's goals of increasing college affordability and completion for more New York students and their families. It will help more students gain access to high-quality public higher education in New York," SUNY New Paltz President Donald Christian wrote in an e-mailed statement in mid July. "At this time, it is still difficult to predict exactly how many students might qualify for the Excelsior Scholarship and the impact it will have on the College. The application deadline is not until July 21 and it's unclear at this time how many will qualify for the program. We are working daily with the Higher Education Services Corporation to process applications and verify eligibility as quickly as possible."

Generally, higher education administrators and advocates are pleased with any news that makes college more accessible to more people in an era of crippling college loan debt and declining enrollment. (Between 2010 and 2017, SUNY enrollment dropped by over 7 percent.) But the restrictions placed on the aid have some shaking their heads: The scholarship does not cover room, board, or books; students must remain New York residents and work here for the same number of years that they have received the Excelsior; and they must be enrolled full-time, something many lower-income and nontraditional students can't manage while also paying living expenses.

SUNY Ulster President Alan P. Roberts agrees the program addresses an important goal. "The fact that the governor focused on higher education is exceptional," Roberts says. "It draws attention to the fact that New York residents absolutely need additional training after high school. He's sending the message that education is important to our economy. The statistics ring very true: 70 percent of new jobs need some type of post-secondary education and 50 percent of our population has none, and that is alarming. The jobs won't come here if they can't find the people."

Roberts doesn't expect the Excelsior scholarship to be a huge factor in SUNY Ulster's enrollment. "It doesn't really hit our demographic," he says. "Most of our traditional students leave debt-free, even before this. We have very low tuition despite having some of the best professors in the state; the TAP program is heaven-sent, and they just opened up the Pell grants to cover summer study. I do believe SUNY will see an enrollment increase, but most of those students were coming one way or another anyway—you can pretty much predict enrollments. I'd love to see a big increase here; we're far from full capacity."

The people Roberts believes could really use some help are the nontraditional scholars: older students who have already launched in life and want to add velocity and altitude on their journeys. "Most of our students are actually part time, students who end up back in school after a year or two or 10 and may be juggling kids or working two jobs," he says. "There's not as much assistance for these people as there should be. And they're likely to stay around and use their degree in New York—their lives here are already established."

Private colleges, meanwhile, were offered something that struck many administrators as an afterthought and not much of one at that. "The Excelsior was designed to enhance access to public, not private schools, and that drew some criticism," says Mount Saint Mary College President David Kennett. "In response to that, they created an Enhanced Tuition Award program that accompanies Excelsior and applies to private colleges and universities. Qualifying students can get an additional $3,000 on top of their existing aid, as long as the school pledges to match it with $3,000 from their own aid budget."

Kennett is somewhat underwhelmed by this prospect, as are many of his counterparts—of New York's 90 private colleges, only 30 have chosen to opt in. "This was created in response to the criticisms offered at the time by those who felt that the Excelsior program would undermine the financial position of private colleges. It's in its first year, and no one fully understands it yet. We think the two thirds of schools that aren't participating this year may be able to opt in later, but it isn't certain."

Mount Saint Mary has opted in on Enhanced Tuition Awards this year, says Kennett. "We have a very serious commitment to exploring all possible ways to lower costs for students, so it was incumbent on us to involve ourselves in this," he says. "That said, Excelsior may be a boon to society as a whole, but not necessarily for private schools. There was a study from Georgetown University that said free public tuition could reduce enrollment at private colleges by 7 to 15 percent by making us less attractive financially. And I don't think this ETA program will help us as much as we would like; requiring the matching investment from our own financial aid funds puts additional strain on colleges that may already be quite stressed."

Basic tuition at Mount Saint Mary is $28,233 this year without financial aid; with room, board, and other fees, a year there costs $44,811. Of 411 freshman who began studying there last year, 410 received grants averaging $14,603 and 76 percent took out federal loans averaging $7,736. Statewide, 86 percent of students at private not-for-profit schools get grants and 42 percent get federal loans.

It's an evolving scenario, set against a backdrop of fewer high school seniors and of tension surrounding student loan debt, rising tuitions, and (in some quarters) questioning of the intrinsic value of higher education in the first place. Private schools with national enrollment draw, such as Vassar and NYU, have generally chosen to sit out the first year of the ETA program. Smaller private colleges—both in New York and nationally—are struggling, and Kennett says Excelsior may have unintended consequences.

"I would have liked to see more evenhanded assistance," he says. "You have to remember that there are already problems with oversubscription at public colleges; this will increase enrollment, but without more resources, that will lead to problems. So in Albany they're talking about increasing resources directed to public schools—and if all that happens, yes, the privates will see enrollment pressure. It's possible that some may be forced out of business, meaning their physical and financial resources will be lost.

"The future for young people and for America depends on access to college, and inasmuch as government is drawing attention to that, we can all applaud," says Kennett. "But if this increases stress on private colleges and reduces their number, I don't think that's the result the governor intended." 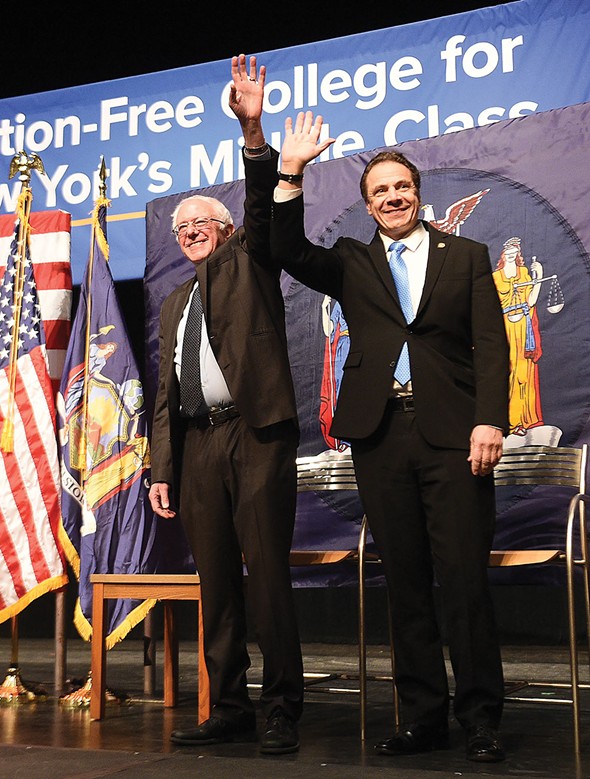