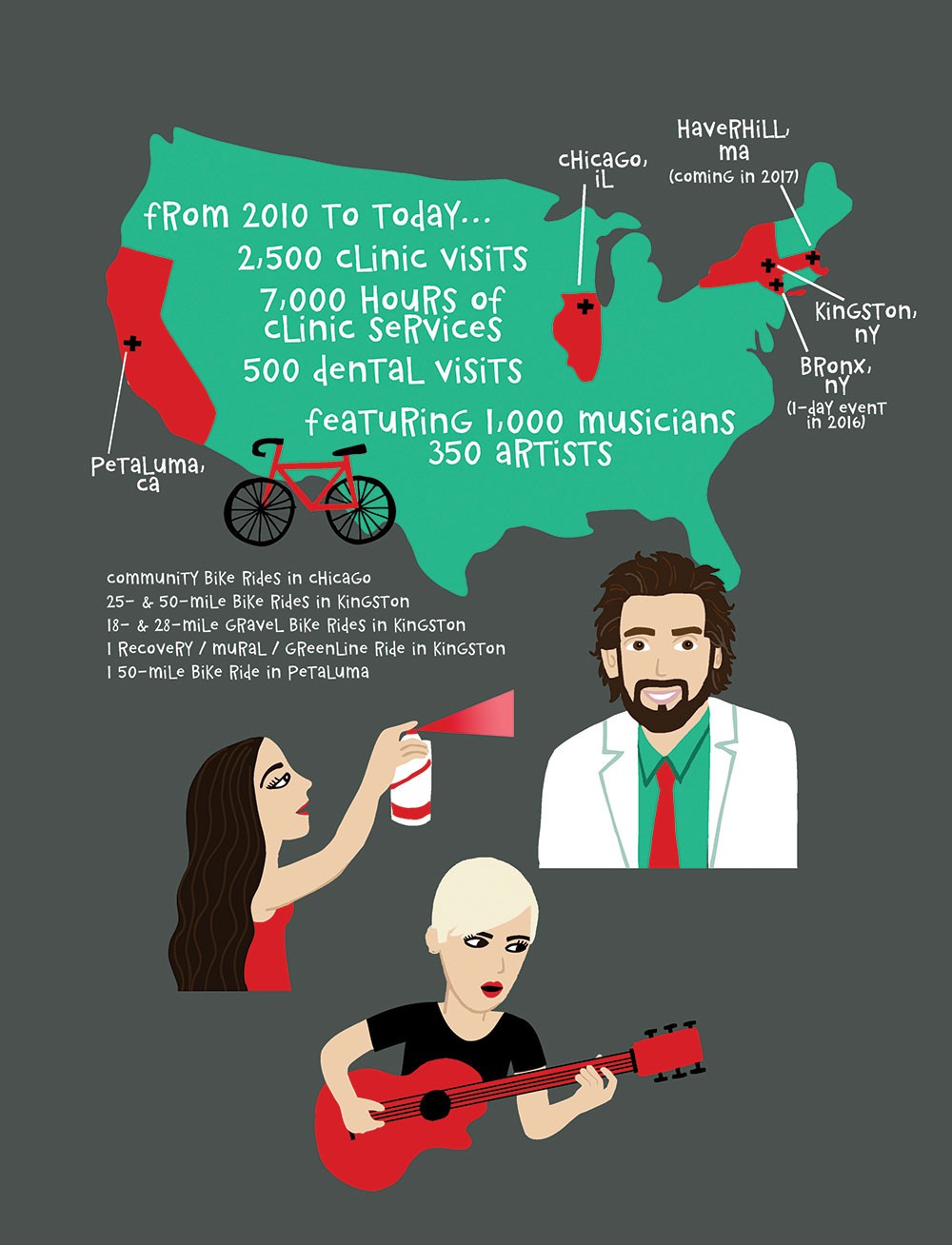 Hannah Mohan arrived at the O+ Festival in 2013 ready to play—and get her teeth cleaned. The lead vocalist and guitarist for the indie pop band And the Kids was looking forward to the weekend-long Kingston event during which musicians and artists perform in exchange for free health care.

She wasn't looking forward to being reminded that she should have her wisdom teeth extracted. "I didn't have coverage at the time," says Mohan, echoing the reality of many musicians and artists who don't necessarily have traditional health insurance. But, in the spirit of the festival, her dentist made her an offer: Bring And the Kids back to Kingston to perform and, while visiting, he would extract her wisdom teeth for free.

That simple transaction, which bridges the medical and creative communities, is the foundation of O+ (pronounced O-positive). The 2016 festival, which includes performances by singer Sondre Lerche, Kaki King, and Chaos Chaos, takes place October 7 to 9 in Kingston.

The foundation of O+ was laid at a party in 2010, when painter Joe Concra listened to dentist friend Dr. Thomas Cingel talk about the challenge of bringing one of his favorite bands to Kingston. At the time, there wasn't a devoted venue anchoring the Uptown Kingston music scene, and Wall Street had its share of empty storefronts. How could a bunch of people get a band in Kingston?

Cingel had an unusual thought: He could clean their teeth.

Concra and fellow Kingstonians Alex Marvar and Denise Orzo ran with the thought, calling musical and medical friends to organize a festival in which musicians and artists would perform in exchange for health care. The festival was founded at a time when, according to a Future of Music Coalition survey, 33 percent of musicians said they didn't have health insurance, twice the average of uninsured Americans. "It was straight up, like, 'We didn't have access to health care, and this would be a good way to get this going,'" says Concra. The first O+ Festival, organized in less than three months, was in October 2010 with 35 bands, 15 visual artists, and about 50 health care providers.

Three years later, Mohan was told by her O+ dentist to return to Kingston for a wisdom teeth extraction. Her dentist? Dr. Thomas Cingel. "That meant the world to me," says Mohan about Cingel's empathy. "I just feel like the whole [O+] community understands worth and value and love."

O+ is hoping those feelings can expand both year-round and nationwide. What began as a weekend-long festival in Kingston has become a movement to keep creative people healthy, from New York to Petaluma, California.

Dr. Mark Josefski was one of the first physicians involved in the planning of the 2010 O+ Festival. The Kingston native and attending physician at the Institute for Family Health's Kingston Family Health Center was asked if he might be interested in contributing his services to the inaugural event.

Josefski and other physicians, nurses, and specialists—including chiropractors, social workers, psychiatrists, acupuncturists, aromatherapists, and reiki healers—work during the festival at the clinic inside Kingston's Old Dutch Church. Any musician, artist, or O+ volunteer can receive free consultation and treatment simply by signing up at the church during the festival. Dental appointments must be arranged in advance.

At a typical consultation, which may last up to 45 minutes, the patient discusses with a nurse his or her physical situation and family history. The nurse will also inform the patient of the services available at the clinic. Sometimes the services, such as the simple touch of a massage therapist, are foreign to patients.

"People who are on the road will certainly have chronic issues they're dealing with," says Shannon Light, a registered nurse and contracted travel nurse, and the nurse-in-charge at the O+ clinic. "Our lead massage therapist has a special place in her heart for drummers. She can just lay her hand on someone's shoulder for 10 seconds to know if they're a drummer or not."

The musicians and artists who receive care at O+ remember it well. Anna Fox Rochinski, lead vocalist and guitarist of the psychedelic indie rock band Quilt, says she felt a connection with energy therapist and aromatherapist Anne Vermilye.

"I look forward to meeting with her again in Kingston as soon as my schedule opens back up," says Fox Rochinski.

Other musicians and artists sometimes can't wait that long, something O+ organizers realized after the very first festival in 2010. Then, practitioners and O+ organizers received frequent e-mails from artists, asking questions about health issues they were experiencing on the road. Armed with those e-mails, organizers and practitioners knew the next step was making O+ a year-round effort, which meant linking patients to systems that afforded them health care outside of the festival.

So starting at the 2011 O+ Festival, Josefski and others were actively helping insured and uninsured musicians and artists access the Institute for Family Health's network, which spreads from New York City to Albany and charges patients on a sliding scale while helping them navigate insurance benefits, especially related to the Affordable Care Act. The Institute also links patients —including O+ performers—with social workers, who help them apply for programs such as Medicare, Medicaid and family planning.

By giving musicians and artists that link to year-round care, O+ began to evolve from a one-shot festival to a siren that attracts performers from across the country to receive care.

"For a weekend we provide a window for the artists and musicians and volunteers who participate," says Josefski. "And what we're really trying to do now is help people access the systems that exist."

O+ alumni enrolled in the Institute for Family Health's network are given the O+ Institute Access Card, which serves as a reminder to take advantage of the Institute's services. Artists and musicians can also sign up for a BandAid RX pharmacy discount card, which allows them to fill prescriptions and receive discounts at more than 64,000 pharmacies nationwide.

O+ also organized four bike rides that began at the 2014 festival. And part of the 2015 festival included a one-day wellness expo and conference with 45 booths and four seminars, including one on the nationwide opioid epidemic.

The success of O+—granted 501(c)(3) nonprofit status in 2014—in uniting the Kingston community revealed a template that other communities could use in helping to solve their local health care issues. So in 2013 O+ launched its first Chicago festival. Two years later, the festival spread to the San Francisco suburb of Petaluma. This year it launched the Bronx Health + Wellness Expo, a one-day combination of health education, screenings, yoga, martial arts, dance, and live music. And in May 2017 O+ will expand to the Boston suburb of Haverhill, Massachusetts.

All of this happened because the signs were clear that creative people needed year-round care. "We were so surprised with how successful year one was," says Concra, who says besides sending e-mails about health issues to O+ organizers, artists would also send e-mails to other artists extolling the O+ model. "That's how this has been able to grow. This really is a grassroots movement based on localism, and based on people listening to each other."

STANDING BY ITS MISSION

Since the passage of the Affordable Care Act in 2010, more than 16 million previously uninsured Americans have gained health coverage, according to the US Department of Health and Human Services. But high deductibles and a limited range of care options have either cramped the newly insured, or have deterred some uninsured from shopping the marketplace. Thus, O+ organizers say the ACA has only made its mission more important, since through O+ Kingston, performers—even if they're uninsured—get linked to the Institute for Family Health, providing them social workers who help them navigate available programs.

O+ is searching for similar partnerships with federally qualified health centers in Petaluma and Haverhill, and is in discussions with one in Chicago. Meanwhile, 115 performers and volunteers received care during the 2015 O+ Chicago festival. In Petaluma in 2015, 97 performers and volunteers received care, and practitioners handed out 263 vouchers that performers could exchange for care with specific O+-affiliated volunteer providers outside of the festival. In Kingston, 94 practitioners volunteered to treat 222 patients in 2015.

Concra says O+ communities typically blend robust music and art scenes with open dialogue about how to change the health care system, though their size, composition, and needs could be extremely different.

"The neighborhood in Chicago is a different animal than Haverhill, Massachusetts, but the thing that doesn't change is the one-on-one personal interaction, and the desire to change the system," Concra says. Ultimately, O+ provides a platform for people across America to discuss how to treat all members of the creative community, regardless of insurance status.

"The reason it's so successful for us is we use art and music as an approach to health care. We make it fun for people to discuss wellness," Concra says. "We throw a big party, and we throw big parties across America, and everyone in the community goes, 'Oh wow, what a cool idea.'

Center for Photography at Woodstock Moves to Kingston