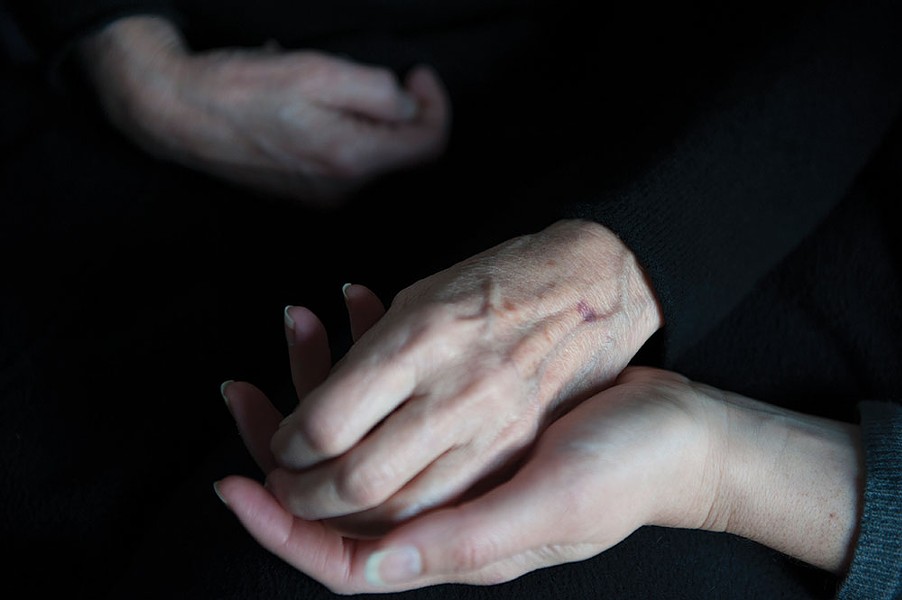 Carinne Luck was not looking forward to giving her father a pedicure. But when the day arrived, Luck chose to view it as a gift. Witnessing her father's physical degradation without denial, Luck felt a sweetness in that physical closeness. "Watching other families at the hospital care for their aging relatives, there were days when I felt like everything was so messed up. But within that experience, there was so much relationship and life," Luck says. "The process of dying is a process within living; it's not death. Just being open to seeing it that way gave me a lot more strength and resiliency."

Luck's father is 62, but after several surgeries that turned out to be unnecessary and left parts of him incapacitated, he was finally diagnosed a year ago with ALS, a degenerative disease of the nervous system. Luck, who lives in Brooklyn, is essentially his full-time case manager, liaising with nurses, doctors, wheelchair services, speech and language therapists, and neurologists. She's selling his house in England, managing his finances, and deciding which things from his life to keep, even though he doesn't need them, so he can balance a life worth living with all that's been lost.

Unlike caring for our children or the temporarily infirm, who improve and flourish with our care, taking care of aging parents involves an often unpredictable situation that usually does not improve. This is something that Luck is keenly aware of through her work as a strategic consultant with Hand in Hand, a domestic employers network that was founded in 2010 when New York State became the first to adopt a domestic workers bill of rights (four states have followed suit). She's worked on the Fair Care Pledge Campaign in cooperation with the National Workers Alliance and Care.com, an online marketplace for care jobs, to encourage all employers of domestic workers to ensure fair pay, clear expectations, and paid time off. Domestic workers (full-time employees who work in the home of an unrelated person) were exempt from the National Labor Relations Act enacted by Congress in 1935, which encourages collective bargaining. Ilana Berger of Hand in Hand feels that including this workforce in standard labor practices will only lead to better care, which is important since, she notes, it's care that happens in the most intimate settings.

Luck knows the challenges of a system that doesn't value elder caregivers. When her father first began to need help, he'd already lost the ability to use one of his arms, so couldn't fill out necessary paperwork or attend meetings to apply for federal assistance. Concerned with worrying his daughter, he carved together a jumble of care through informal channels, and ended up with an aide who was neglectful and abusive, and ultimately was arrested. "My professional work informs my personal experience," Luck says, "and my personal life informs the challenges and potential of building quality care for seniors and everyone who needs it."

Although Luck's father is in a nursing home in England, her need to establish a clear narrative of her dad's needs by weaving together different agencies that don't always talk to each other mirrors the American system. It's actually more a collection of sectors (legal, financial, real estate, insurance, medical, social, mental, etc.) than a bridged system. "With all the information that a person can download from the Internet, what they generally end up with is a pile of names and 'eldercare speak' to work through," says Henry Alter, founder & CEO of the Orion Resource Group, a membership association of professionals in a broad range of elder care specialties. "It's challenging to piece together sensible solutions to the issues elders and families face. At the end of the day, we're all consumers who need to find somebody knowledgeable and caring to help navigate the eldercare matrix."

The lack of coherence in this setup is becoming more pressing. According to a 2013 report by the Centers for Disease Control, "Two factors—longer life spans and aging Baby Boomers—will combine to double the population of Americans aged 65 years or older during the next 25 years to about 72 million. By 2030, older adults will account for roughly 20 percent of the US population." Dr. Bruce Chernoff, the chair of Congress's Commission on Long-Term Care, has noted that 70 percent of older Americans will need some form of long-term services and support for, typically, three years. With nursing home costs averaging $81,000 annually, and in-home care averaging $21,000-22,000 annually, it's an inevitability that most families aren't prepared to handle. Usually a person has to spend down their savings and resources to qualify for Medicaid's coverage of long-term care costs. And economists worry that expecting Medicaid to assume all those costs is unsustainable. The Ettinger Law Firm in Rhinebeck (among other locations) helps people plan for disability first through the creation of a trust, which the firm recommends as the best tool for preparing for any unexpected life changes.

Luck feels it further widens the gap of inequality when the middle classes spend all their money on parent care and have nothing left to inherit from their parents' savings. She's barely worked in the past half year due to a three-month-long visit to England.

Knowing that nothing in her dad's case is easily resolved, Luck focuses on her own well-being, which is crucial to her maintaining the long haul. She attends programs at the New York Zen Center for Contemplative Care in Manhattan, which integrates Buddhist practice with intentional end-of-life care, and reminds herself of what's she come to realize through the teachings: "The actual journey of actively dying and being sick, that's my dad's journey. That's not my journey. I can't change that for him." In England, she maintains her daily Pilates and meditation practices, and brings healthy food to the nursing home to keep her body strong while she cares for her dad. And she tries not to get so lost in it that she can't find the simple pleasures, like playing cards or sitting in the sun with him.

Allison Gould, a social worker at the Center for Healthy Aging at Northern Dutchess Hospital, says, "When someone is taking care of their parents, people tend to see it as an act of duty or responsibility, and don't always recognize the degree to which caregiving impacts a person's life at every level." Gould offers bimonthly caretaker support groups where people can discuss the challenges. "The word that keeps coming up in these situations is loss. The person receiving care is losing independence, but the person giving care has also lost so much of what their life was like before." As people have children later in life, a scenario where people are caring for parents and children simultaneously has developed—what has been loosely termed the sandwich generation. Similarly, there's rising longevity, and the Baby Boomers are finding themselves entering retirement with a 90-year-old parent to care for, and a small percentage (7 percent), are the elderly caring for slightly more elderly spouses. What already felt busy or barely manageable could easily become overwhelming with the addition of eldercare responsibilities.

Gould finds that starting conversations early on is key to being prepared for what's to come. One of the things she does at the Center for Aging is advanced care planning, where she guides people through much deeper conversations about the nitty-gritty of health-care proxies. "You might be surprised by how much the person you're concerned about has thought about this," Gould says. "They may be helpful in guiding you in what to do."

Gould says that aging parents sometimes fall into types: those who are looking forward to their adult children taking over their affairs; those who fight to maintain their independence; and those who come to acceptance, but with guilt, shame, and disappointment. She does outpatient counseling with people who are 65 and older who have acute issues related to getting older (adjusting to the time structure of retirement or no longer being able to drive) as well as people with ongoing anxiety, depression, or family issues. "As people get older, they can lose confidence," Gould says. "The things they once could take care of, they now need a lot of feedback and reassurance. It takes time and patience and energy, and can be really draining. The number one complaint from caregivers is that there's not enough time in the day."

Including faraway siblings and other family members can take some creativity, but it can ease the burden on the local person. Gould suggests paying bills online or calling the parent each night as ways of helping others share the experience. But families can be wrought with tension. As Rachel Loshak, a musician and teacher in Kingston, identifies, "There might be years or a lifetime of struggling communication that, when someone is sick, can be heightened. It's hard to get past that, but you have to in order to move forward and be able to care for that person lovingly." Loshak is an eight-hour flight from her mother, who is near 70 and has a rare form of incurable cancer. She takes comfort in her brother being an hour-and-a-half flight away. And Loshak looks to her mom for inspiration. Her mom took care of her grandparents when Loshak was a teenager, and offers a good example of selflessness. "There's a lot more baggage with your own parent. You've really got to rise up," Loshak says. "As my mother gets older and things progress, I envision myself in the future being able to rise up more. I have been able to let go of things that I find difficult within our relationship, but there's definitely more I can do."