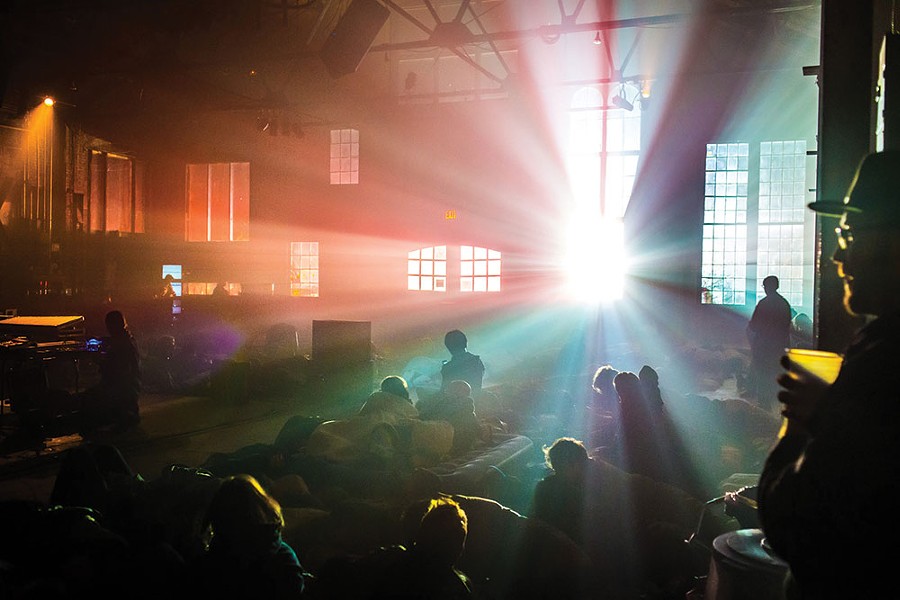 A single, sustained note hangs in the air. It rises, dips, and further fluctuates in pitch. But, over a span of roughly three quarters of an hour, it does not stop. Instead, once that 45-minute segment has gone by, the musician or group of musicians who've been emitting the tone goes silent and another musician or group immediately takes their places and begins to play. They, in turn, pick up the hovering sound and keep it aloft for another 45 minutes until the next player/group picks it up and passes it along to the following act, and so on. By its end, this sacred sonic cycle will have lasted, nearly unbroken, for a full 24 hours. Welcome to 24-Hour Drone, which on April 29 and 30 marks its third staging at Basilica Hudson.

"It really reflects the power of an immersive, shared experience," says Basilica Hudson director and the event's co-organizer, Melissa Auf der Maur—who rock fans will know from her stints as the bassist of Hole and Smashing Pumpkins—about 24-Hour Drone's overarching concept. "It's liberating, something that appeals not only to people who are into experimental or drone music, but also to people who primarily listen to rock or classical music. So there's a real crossover going on. It's not so much about headliners—it's about the event as a whole."

Yet, there are certain known artists whose names can't help but bring wider attention to the Hudson festival. This year's roster includes, among many others, Faith No More keyboardist Roddy Bottum, no wave composer and guitarist Phil Kline, A Silver Mt. Zion violinist Jessica Moss, and Brooklyn singer-songwriter and band leader Shilpa Ray, whose main instrument, harmonium, is perfectly suited for such an occasion.

"I've done some solo performances before," says Ray, who for her slot will be performing in a rare unaccompanied-and-improvising setting. "But those were structured pieces, usually for theatrical things, and because of that they were more strictly dependent on time."

Time has seen 24-Hour Drone fan out from its 2014 beginning in Holland by parent organization Le Guess Who? and its partnering with Basilica Hudson for its 2015 US launch: Earlier this year, satellite installments were held in Canada and the UK, and, at the moment, Auf der Maur, her husband and Basilica partner Tony Stone, and Le Guess Who?'s Bob van Heur are in discussions to bring the franchise to Sweden and Cuba later in 2017.

"One of the precepts of the event is that we really try to tap into the whole local color wheel of wherever it's taking place by featuring artists from within a two- or three-hour radius of the venue," Auf der Maur explains. "Obviously, because of its experimental style we include a lot of noise and avant-garde artists, and I'm always so amazed by how many of them are right here in the Hudson Valley. But we also like to include more 'normal' [i.e., conventional] musicians and encourage them to try droning, which for many is something they've never done before. And we also reach out to heritage and indigenous artists; at the Canadian event we had singers from the local Icelandic subculture and at this month's event in Hudson there's going to be an endurance reading of [sacred text] The Testimonies of Mother Ann Lee presented by the Mount Lebanon Shaker Museum."

Many attendees of the Hudson happening come for the duration, taking advantage of the on-site bar and food vendors and even camping out on the floor of the cavernous, 19th-century Basilica building as the hypnotic sounds surround them (sleeping bags, blankets, pillows, and mats are all encouraged).