Shine On You Sexy Diamond 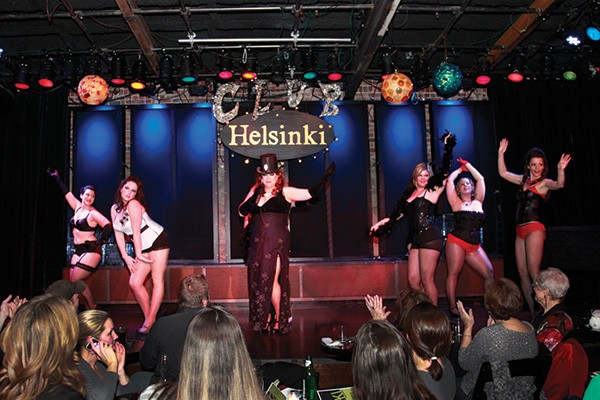 If you are dining at Club Helsinki in Hudson some Wednesday night, you might happen to overhear a little hootin' and a-hollerin' from upstairs. Not to worry. That's just a bunch of burlesque babes getting their goddess on.

"Burlesque" takes us back to that bawdy vaudeville era, where bodacious beauties in fishnet stockings flirt and tease to vampy music. Make no mistake, that's definitely part of it. But the "Diamond Street Dames" (named as an homage to Hudson's Diamond Street, a vibrant center of adult entertainment in the late 19th century) are much, much more than that.

These women gather in the lofty dance-hall-like space for their weekly burlesque exercise class. It's a magnificent menagerie of women of all kinds: mothers and single ladies, aged 21 to 62, with bodies in every shape and size. Some have a background in dance or performance and are attracted to the campy, costumed world of burlesque, where nobody takes themselves too seriously. Some are inspired after seeing a Dames show and dip their toes in to get their "sexy" back. Some come for the exercise. Yes, it is a workout. "But in burlesque, we don't sweat. We glisten," says Diamond Street Dames co-founder Brittany Thibeault.

Feather bits of boa float about the floor as the women put their yoga mats in a circle. In walks "Luscious Lucy," a relative newcomer to the class, sporting a lace-up-the-back black corset. The cluster of women in the corner lets out gasps. With intense whispers they tell her, "You are so sexy!"

"We can be hard on ourselves when we look in the mirror," says Thibeault, "but in class these women become a mirror for each other." They start as strangers but transform into a supportive sisterhood in mere weeks. From the first day of class the message is clear: "Leave everything at the door. The spouses, the children, the jobs, the stress... Let this be your time and yours only," explains co-founder Kacey Quirk.

They do yoga-like floor work—good for "feminine areas." They strut and they dance. They "dirty grind" and they shimmy. They play burlesque musical chairs, each woman taking a solo turn in the center of the room (boa optional). Fun, brassy, wild music sets the tone. And these women have moves.

Over the course of the classes they discover their inner burlesque persona. Maybe it's who they used to be, or who they'd like to be, or the woman they don't dare to be in real life. Brittany's "Miss Moaning Lisa" was inspired by Hollywood glamour (think Jessica Rabbit). "Dark and Stormy," in a flannel shirt, sits quietly with her arms wrapped tightly around her knees, but when she takes the chair at the center of the room, this woman is in control! "B. B. Kink" is a radiantly (very) pregnant goddess, working her sexy Santa costume. "A-Roar-A" introduces herself with a cat pounce and a purr.

As part of the class, the women participate in a photo shoot in character and the pictures reveal something powerful. The first time she saw her photograph, a mother of three sobbed, "I can't believe that's me."

At the end of the class series, the Dames perform. "When showtime draws near, I marvel at the difference in these women," says Quirk. "They come to the very first class nervous and shy, almost embarrassed, feeling silly. Twelve weeks later, these women are fierce, strong goddesses who own who they are and make the room shine!! You might say, like a diamond!"

The Best and the Brightest