The Devil’s Advocate: A Local Outlet for Student-Created Content | In the Classroom | Hudson Valley | Chronogram Magazine

The Devil’s Advocate: A Local Outlet for Student-Created Content

When Alex Shiffer and Sharon Richman began publishing the Shawangunk Journal in 2006, their daughter Jasmine was just a tot. Ten years later, she was well-schooled and positioned to note that Ellenville High School lacked a dynamic news source. "When I was a freshman, there was a printed school paper that came out twice and then just vanished," Jasmine Shiffer says. "I thought there ought to be something out there that people would actually notice. So I just kinda went for it, started writing posts."

The Devil's Advocate (Ellenville's sports teams are the Blue Devils), a free app with student-written content, has been downloaded by at least 270 people. One story a week is printed in the Shawangunk Journal. "Last year there were 10 of us, this year there are seven," Shiffer says. "We meet once a month and have a group chat where we get stuff done. Students talk about it, even teachers talk about it—we did a series of teacher interviews last year and they all really got into it. I love reading the comments, and when people come up to me in person with reactions. We get all kinds of feedback."

Sometimes the feedback is contentious. A recent opinion piece about the district's decision not to close school when the weather broke bad on the day of a bond vote drew phone calls from aggravated board members; the Devil's Advocate plans to follow up with a news story about the vote that will include an interview with district superintendent Lisa Wiles. A piece about trans people in athletics became "a full-fledged debate between one older guy and four of my friends," Shiffer recalls.

Shawangunk Journal publisher Amberly Jane Campbell is confident in the news judgement of her young colleagues. "The critical thinking and depth constantly impresses me. We chose not to write about a student going through a pregnancy, but when a student got arrested, that was covered; we had really deep discussions about both of those decisions. Every time I sit down to hear their point of view, I'm enlightened. It's beautiful to watch."

Besides the free app, the Devil's Advocate is part of NewsAtomic, a hyperlocal journalism multiverse designed by the Shawangunk Journal's tech-savvy founders. There's a subscriber paywall, but nonsubscribers can read content from Hudson Valley Livelihood, the Delaware Hudson Canvas, the Livingston Manor Ink, and the BKAA Guardian for 25 cents a story.

The business model was featured in late October in the Atlantic as "The New Approach to Local Journalism," and folks took notice. "We were approached by a few fellowships and grants, by some local organizations to be on panel discussions, we were invited on various radio shows, and three other local independent publishers reached out to us to be a part of NewsAtomic—Ulster Publishing, Mid-Hudson News, and Sullivan Times," says Campbell. "There's also an investigative, women-led publication starting up out of Kingston."

Alex Shiffer says it's working well. The Shawangunk Journal gained 200 digital subscribers last year, and print subscriptions rose for the first time in five years. The software that powers the student pub is available to districts everywhere, free of charge. "Rondout Valley's version of the app is being finished; they've got teachers involved and kids ready to go," says Campbell. "We have a school in Minneapolis, and one in New York City. Those places are adopting it through district channels. Ellenville's been a bit more rogue, but we want it to have a future, so down the road it may become official." 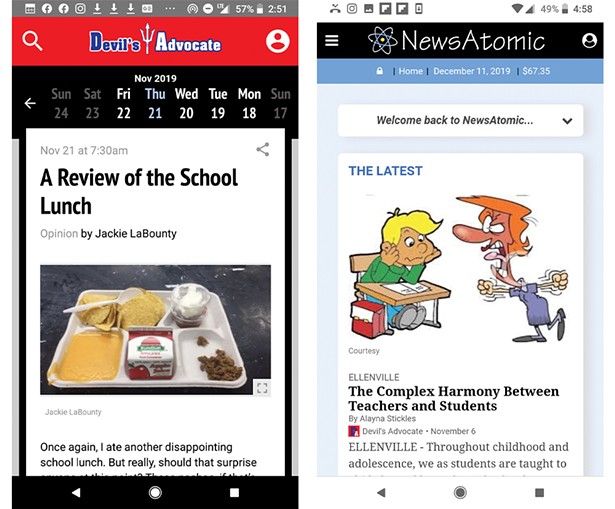 "We just need a faculty member who's a strong believer in the First Amendment and understands that honest journalism is never going to be 100-percent positive," says Alex Shiffer. "The dream was to have underground, insurgent school papers popping up everywhere, but without the school buying in, it's difficult. But it's really easy for community publishers to sponsor school efforts and get great content and terrific PR. I'd like to see every district in Ulster County get involved."

His daughter has caught the news bug. "I'm not certain what my life will look like, but at least in college I definitely plan to be involved in journalism," Jasmine says. "I think it's a powerful way to reach people and encourage them to concentrate more and see what things actually mean; it brings people together and helps them understand one another."

That, says Campbell, is higher-order education. "Especially in a place like Ellenville, where we have students from every point on every imaginable spectrum of circumstances and viewpoints. They need to learn about agreeing to disagree and staying civil. And they are unlikely to pick up a print newspaper."