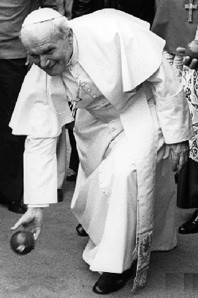 If you’ve ever wondered what the pharaohs of ancient Egypt were doing in their free time: They were probably playing bocce.

Perhaps it was not yet the refined, internationally regulated sport it is now, but certain visual representations found in Egypt suggest that people have been throwing balls at targets for quite some time—as early as 5200 BCE, in fact. The Egyptians began by tossing polished rocks at a fixed object for sport, a practice imported to Greece in the eighth century BCE. The game was later picked up by the Romans, just one exchange in a long history of Romans borrowing things from the Greeks and then taking credit for them (think gods and classical theater).

The Romans actually adapted the sport to something closely resembling what it is today, beginning with coconuts from Africa and later carving balls from olive wood. They eventually coined the Italian term bocce, believed to derive from the French word bosse, which means “hump” or “bump.” Having established itself as the preferred recreation of Roman statesmen and emperors, bocce spread throughout Europe and became wildly popular among both nobility and peasants alike. People fell in love with bocce, many believing it to be a therapeutic sport with the ability to rejuvenate both mind and body.

It was not a long-lasting romance. State leaders claimed that the vogue of bocce was distracting from more important matters of security, such as archery and military training. The game was outlawed by both Charles IV and V, and the Catholic Church later condemned it as a dangerous form of gambling. The famously obstinate Queen Elizabeth I is reported to have loved the sport, as did her employee Sir Francis Drake—it’s rumored that he refused to lead his English fleet against the advancing Spanish Armada until finishing a round.

Bocce eventually made its way to the United States, where it was played on courts of shortly trimmed grass. Bowling Green, New York City’s oldest park, played host to some of the country’s earliest matches, and president George Washington added a court to his home at Mount Vernon.

The sport has seen a surge in popularity in the United States since the early 20th century, owing in part to a growing population of Italian-Americans. Our country now has its own Bocce Federation, the governing body of bocce in the United States. The federation recently announced that our women’s national team has been invited to compete in this year’s World Championships, set to be held in Zhejiang, China in October.

Take part in the world’s earliest sport this Saturday, July 12, when we host our Full Moon Bocce Tournament at Riverfront Park in Beacon. Purchase your tickets here.

Take a tour of the game's long, sometimes scandalous history.