The Country Farmhouse Gets Creative 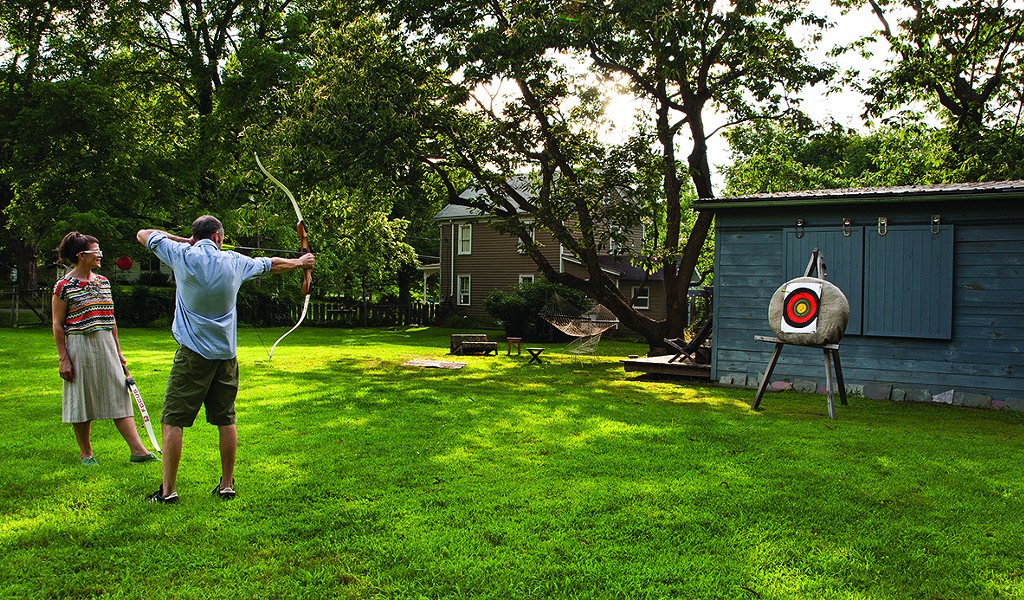 Turn south off Route 32 onto Main Street in the Rosendale hamlet of Bloomington and you'll find yourself passing modest houses on reasonably sized lots with well-tended, but not fastidiously tended lawns. Make a left turn onto a dead-end road and a right turn onto another road that dead-ends at the Rondout Creek and you will have arrived at the home of Christina Osburn and Paul O'Connor. Viewed from the street, their home is deceptively unassuming, another two-story balloon frame construction dwelling in a neighborhood of similar houses, where residents tack on additions as needed. All the nearby houses are similar, all are slightly different. But since 2004, when O'Connor and Osburn bought this old country farmhouse, an ingenious transformation has been taking place.

First, some notes on the owners: Osburn is an art teacher at Highland Middle School; O'Connor is the Technical Director of the Drama Department at Vassar College, where he teaches stagecraft and instructs students in set design for Vassar's theatrical productions. O'Connor has also created the theatrical ball drop contraptions for Kingston's past three New Year's Eve celebrations.

Both are trained fine artists who bring creative energy to an evolving renovation of their domestic space. O'Connor's love of symmetry and tradition leads him to clean lines and tidy solutions. Osburn's modern aesthetic pushes toward wilder ideas. "We're a great team because Paul will do anything I ask him to, so it's really perfect," Osburn says, and laughs, before continuing. "From being in the theater and probably just intuitively, Paul has a really good vision of how to make anything look good. Which helps me because I can get a little crazy." O'Connor adds: "Some of the more modern choices we make are simple, which is sympathetic to an old country home."

The design and furnishings of the Osburn/O'Connor home are not crazy, but they're not boring either. Case in point: All the objects serving as curtain rods in the home are salvaged objects. Osburn's grandfather's old longbow hangs in one window, her grandmother's cane in another. The coat rack in the hallway, screwed into a wall of exposed plaster that Osburn and O'Connor glazed just because they liked the raw look of it, employs unusual elements as coat pegs. "We love repurposing," O'Connor says. "It's clever and resourceful. We get pleasure from using trophies as coat hooks."

Such details abound throughout the house—in the guest bedroom, the floral linoleum from a much earlier renovation, pixelated to resemble carpet, has been preserved. It's an ironic art piece underfoot. This is a house to be lived in, designed by people with taste—just not fussy, House Beautiful-type taste. Every choice is purposeful, reflecting the couple's desire for comfort and aesthetic integrity. The walls are covered with art by local artists who are also friends, like Kieran Kinsella, Ivin Balen, Meghan Petras, Matt Pleva, and Stockade Tavern owner and erstwhile painter Paul Maloney. Even the kid from next door, Will Giannukos, gets his art on the wall: his shambolic wood construction wouldn't be out of place in a show of outsider artists and it fits right in on the living room wall next to a chalkboard (reclaimed from the school where Osburn works), on which Pictionary is often played. For Osburn and O'Connor, it's not about posh, it's about what they like.

The first thing that the couple did when they moved in a little over 10 years ago was to rip the fake brick asphalt shingles off the house and reveal the original wood siding. Then they dealt with the siding, a major task. "We touched every surface of the exterior four times—patch, plug, prime, paint," says Osburn, with exasperation.

The property, two-thirds of an acre, came with a number of outbuildings, including a dilapidated outhouse. Restored by the couple, O'Connor installed a light fixture, and it serves the couple well as they entertain multiple nights a week, whether it's a seafood boil or a badminton tournament on the regulation court in the side yard. (O'Connor is a bit of a nut for badminton.) The outhouse is a two-seater. "We've never used it together," Osburn notes wryly.

Another outbuilding was a chicken coop, which was knocked down and became the site of O'Connor's woodshop. To call it a "woodshop" is accurate but undersells it. O'Connor's 600-square foot shop is a woodworker's wet dream, kitted out with every machine and hand tool imaginable. It's where O'Connor built many of the furnishings of the house, including the built-in bookshelves in the living room and the kitchen cabinets. The shop doubles as a man cave, with a fridge, dartboard (ingeniously counterweighted to slide up and down depending upon the work/play situation), and a wood cookstove that the couple sometimes fix dinner on during the winter. A roaring boar's head, a prop that O'Connor built for a long-ago production, stares down from its perch. The walls of the shop are repurposed cedar fencing from the Vassar campus, giving it a weathered look and making it seem like it's always been on the property.

Just a few feet away is Osburn's studio, which is also constructed of salvaged materials, including windows donated by neighbors and a modern glass door sourced from a demolition site. Inside, Osburn's work as a multidisciplinary artist is everywhere on display: there's furniture she has designed, a crotched rope structure hanging from the ceiling, color grid paintings on the wall, figure drawings are lying around. There's a small wooden model of their house which Osburn uses to envision the next phase of renovation or addition she and O'Connor might undertake. She's also making marble cheeseboards, which have had a couple sold-out runs at Little House home boutique in Woodstock. To top it off, she's a baker and (more intriguingly) an amateur mixologist. "I'm into the art of the cocktail," Osburn says. A recent invention: mezcal jalapeno margaritas made with rhubarb simple syrup. (The rhubarb was homegrown, natch.) But the teacher modestly demurs from highfalutin labels. "I don't consider myself an artist," Osburn says. "I'm really an art teacher."

When asked if there is an endpoint in site to a home and property that seems to be a perpetual work-in-progress, O'Connor says he doesn't think so. "Neither of us have the personality that would allow that. We definitely have slowed down in some ways, certainly since when we first moved in. Because it's so comfortable now we don't need a lot of things to be different than they are. But we have a desire to keep working, to keep re-imagining our home. We love the work, we love the design, we love entertaining, we love being home."