The Chicken Painter of High Falls

August 30, 2011
Last Updated: 08/07/2013 4:26 pm
comment
Marc Chagall built an illustrious career as a multidisciplinary artist creating works in an encyclopedic variety of media, from stained glass to stage sets. He made a name for himself as one of the premier early Modernist artists of the 20th century. He narrowly escaped the Holocaust by fleeing France to awaiting international notoriety awaiting in New York City.

And then, he stopped painting.

For nearly two years, Chagall “the artist” essentially disappeared as he grieved the death of his beloved wife, Bella. That is, until 1946, when he found a new lover and sanctuary in a quiet, quaint hamlet in Upstate New York: High Falls.

The two-year painting binge Chagall went on in High Falls produced some of his most critically acclaimed pieces, like Four Tales from a Thousand and One Arabian Nights. It’s also a pocket of his life largely untold, says Rydant, which is why he and Gary Ferdman created “Chagall in High Falls,” a documentary exhibition of art, photos, and ephemera on display during September and October at the D&H Canal Museum Chapel.

“If people want to view his art it’s available, but what we really want to do is tell the life story of Chagall in High Falls, which hasn’t been told,” says Rydant.

The exhibit opens on September 2, the anniversary of Bella’s death, a pivotal moment in Chagall’s life and career. The following night, September 3, Chagall’s granddaughter will be on hand from 5 to 8 pm for a special opening reception to celebrate two months of art, family photos, educational programs, and oral history. There will even be a Chagall-inspired meal when Rydant and Ferdman host an exhibit fundraiser on September 17 at 6 pm at the Depuy Canal House with restaurateur John Novi.

“It’s going to be a very rich experience. A lot of people will be very surprised at this aspect of local history,” says Ferdman, who lives kitty-corner to Chagall’s former home. “We’re in touch with several people who have wonderful stories, recollections, family myths about Chagall.”

The live documentary will expose a side of High Falls that many outsiders don’t even know existed, says Ferdman. And, if they do know of Chagall’s unintentionally mysterious time in town (locals called him “The Chicken Painter” because of a notorious rooster painting), the exhibit is sure to conjure up some memories and answers.

“He painted outside but not too many people saw what he painted because the artwork went directly from his studio to a gallery in New York City,” says Rydant. “The community knows that he was here and knows a little bit about him, so this presentation is to bring it all together for the community so they know the complete story instead of bits and pieces.”

Rydant and Ferdman hope the exhibit will draw untold Chagall stories out of the woodwork. And, perhaps, even an undiscovered painting. “There’s speculation he gave a painting to a neighbor. Several people indicated they knew people who were offered paintings by Chagall in lieu of payments, as a barter,” says Ferdman. “It’s possible there are Chagall paintings in attics or barns or basements somewhere in the High Falls area.”

Curious visitors will see 13 reproductions of Chagall’s colorful, High Falls-era lithographs. There will be a collection of family and professional photos of Chagall walking down Mohonk Avenue, Chagall nose-to-nose with a cow, and Chagall with the barely mentioned woman who helped revive his career, Virginia Haggard. “This will be one of the few times Virginia is given a proper role in Chagall’s life and art. We’re trying to right a historical wrong by doing this,” said Rydant.

“Chagall in High Falls,” will be exhibited from September 2 through and October at the D&H Canal Museum Chapel. 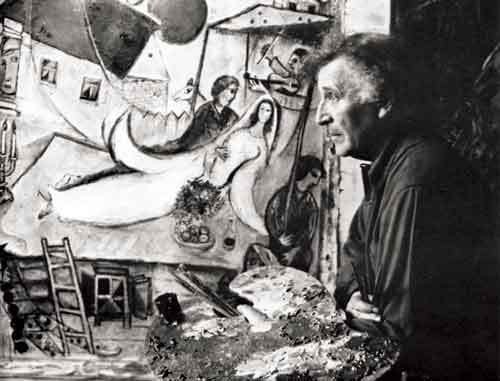