The Botanical Imagination of Levy and Serrano 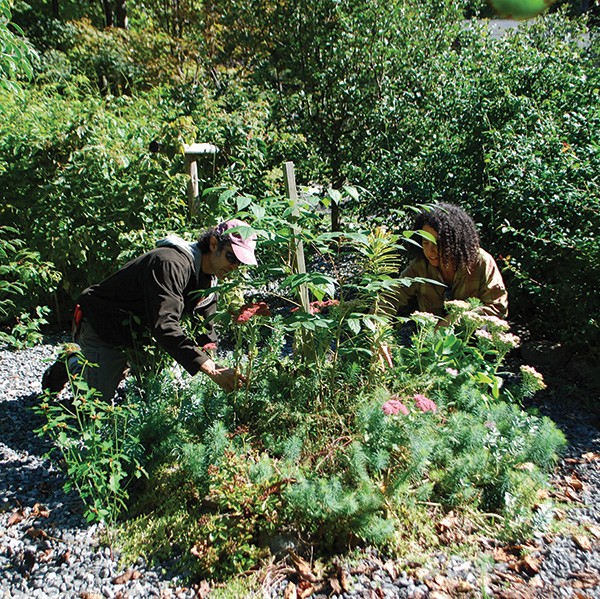 Allyson Levy and Scott Serrano want you to visit their four-acre botanical garden, Hortus Conclusus (Latin for "enclosed garden") in Stone Ridge. There, you will get to sample things like sarsaparilla berries, which Serrano says taste like "blackberries with a hint of Tabasco at the end," and Mexican miniature sour gherkins, which are like citrusy cucumbers that you pop in your mouth like grapes.

Unusual fruits that are easy to grow are a major focus of Hortus Conclusus, where edibles are among the more than 10,000 plants Levy and Serrano have put in over the past 13 years.

Having interesting things to eat was one of the initial motivations for gardening for the couple, who started out as foragers of wild foods. Now they see their mission more broadly and longterm, as they seek to create a botanical garden that can serve as an educational resource for the public.

In her work, Levy gorgeously embeds encaustic (pigmented beeswax) with seeds and other organic materials from her garden. "It started with the idea of making my own ex situ seed library by incorporating seeds of plants that I loved into my work, knowing that if these plants somehow became extinct I would be able to repopulate nature with them," she says. "This is based on the 15th-century idea of storing seeds in wax for storage on shipping vessels." Levy is currently exhibiting her paintings at PS 209 in Stone Ridge and will be having a show at Carrie Haddad Gallery in Hudson this summer.

Serrano is best known for his fabricated 19th-century science installation, "Picturesque Flora Wallaceana: Botanical Ambulations in Greater Wallaceana 1854-1857." Picture an exhibition in a Victorian natural history museum, where the entry is marked with red velvet curtains. Inside are displayed meticulous, colorful botanical illustrations and descriptions of the most truly peculiar, fantastical flora to be found on the island of Wallaceana. There are travelogues and vintage newspaper articles, and flowery quotes from plant explorers written on the walls above these items.

The name of Serrano's invented island of Wallaceana is an homage to naturalist and plant explorer Alfred Russel Wallace, who co-discovered evolution by natural selection with Charles Darwin. Serrano says he is obsessed with Wallace's travel accounts. "Wallace's writings capture the feeling of absolute unbridled joy of hitting tropical jungle, being immersed like a sponge among new plants and insects, and trying to record everything he saw," Serrano says. "Describing orchids he'd never seen, recording the number of leeches on his body at the end of the day—his writings convey the feeling of being an awestruck five-year-old kid. That's the way Allyson and I feel when we encounter plants that are new to us."

A close-up in Levy and Serrano's garden and artwork.