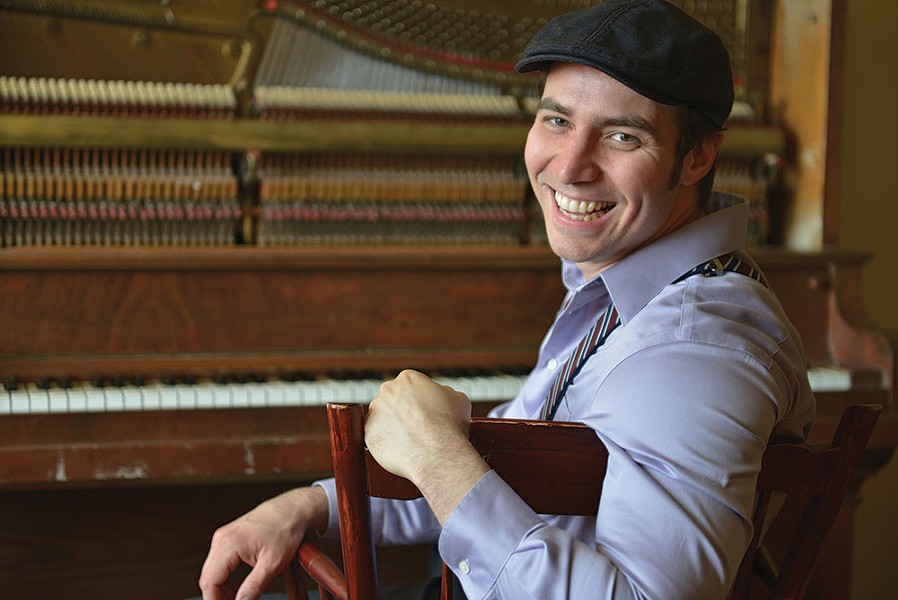 Boogie-woogie is the speed metal of traditional blues and jazz piano. The roots of the rolling, rapid-fire style—also called barrelhouse; its origins are in honky-tonks, gin mills, and rent parties—stretch back to the turn of the last century and are intertwined with its comparatively sophisticated cousin, ragtime. One of boogie-woogie's greatest living young practitioners is New York piano man Arthur Migliazza, who will perform early this month at Saugerties Performing Arts Factory (SPAF). Pioneered by pianists in Texas, Chicago, and New York, boogie-woogie was popular with dancers largely because by their keeping up a repetitive, walking bass line on the keyboard with their left hand while adding rhythmic, percussive decoration with their right, its solo players could create the aural illusion of a full dance band. Boogie-woogie peaked in the 1940s when it was adopted and expanded by the big bands (see the Andrew Sisters' "Boogie Woogie Bugle Boy"); it in the 1950s became a building block of early rock 'n' roll. Migliazza, who grew up near Washington, DC, conferred with Chronogram via e-mail and will appear at SPAF in Saugerties on March 4 at 7:30pm. Tickets are $25 ($40 for VIP seating and champagne afterparty). Chronogram readers can receive a 25-percent discount by using the code CHRON25 when purchasing tickets at Eventbrite.com (search for events in Saugerties). (845) 246-7723; Saugertiesperformingartsfactory.com.—Peter Aaron

You're in your mid-30s and started playing piano when you were nine. What made you want to play the blues?

I started with regular old "kid piano lessons," where I was learning how to read notes and develop practice regimens. Luckily, I had a teacher that was really hip, and she exposed her students to all kinds of different music. The blues was one of the styles that she exposed us to. I took to it immediately. It called to me. My teacher encouraged my mom to get me lessons with a local blues piano player, too, so I started taking blues lessons biweekly. I loved listening to the old blues recordings my teacher gave me to study. The sound was so soulful and the rhythms so infectious. I would stay in the basement for hours, trying to copy what I heard on those old recordings.

You're considered a boogie-woogie specialist. What about this particular strain of the blues so fascinates you?

I love the rhythms and the groove. When it's played correctly, there's nothing quite like it. It's so full of joy and emotion. It's also a very physical, almost an athletic kind of piano playing. So, for a hot-blooded Italian like myself it's perfect.

Who were some of the pianists that inspired you when you were starting out, and what made each of their styles interesting to you?

I was lucky enough to learn how to play directly from talented musicians who were playing boogie and blues piano as a profession. Therefore, my teachers were also people whose recordings I listened to and loved. People like Ann Rabson, Mr. B (aka Mark Braun), and Henry Butler. Mr. B taught me many of his original tunes, as well as some killer boogie-woogie and blues bass patterns and licks. He lived in Ann Arbor, Michigan, and I lived in Tucson, Arizona, at the time and used to call him up and we would have piano lessons over the phone. Aside from these direct teachers, I learned a lot by listening to Professor Longhair, James Booker, Champion Jack Dupree, Jimmy Yancey, Otis Spann, Albert Ammons, Amos Milburn, Blind John Davis, and Big Maceo Merriweather.

Many people seem to view the blues and boogie-woogie as quaint, museum-piece music. What would you say to them to make them understand that the music is still vibrant and relevant?

Boogie-woogie is a big part of the backbone of all American pop music that came after it. Many elements developed for boogie-woogie and blues music are still present today. Everything from the "backbeat" to the technique of "dropping the bass" came from the blues and boogie. It's a shame more people don't know about it, but I do my best to bring an educational element into all my concerts, so that people understand where this music came from and how it played a part in developing today's music.