The Bocuse Restaurant at CIA

In with the Nouvelle 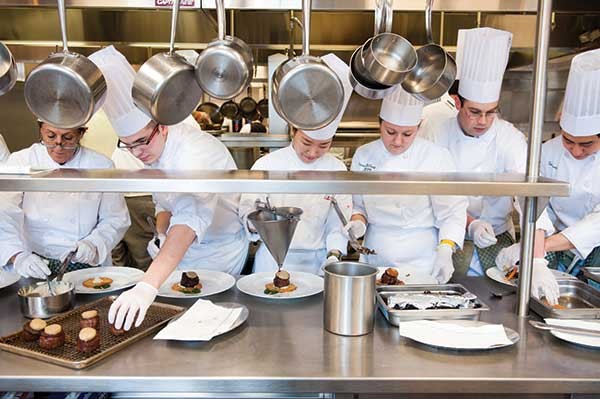 Last month, amid much fanfare, the CIA's new Bocuse restaurant opened to the public in the space formerly occupied (for almost exactly 40 years) by the Escoffier restaurant. Georges Auguste Escoffier is revered as the man who, by modernizing its Baroque excesses, elevated French cooking to its place as the most esteemed in the 20th century. Paul Bocuse, now 87, is the eminence grise of nouvelle cuisine, the movement beginning in the 1960s that eschewed Escoffier's still-heavy tradition of cream-based sauces and elaborate presentations, favoring instead lighter, more seasonal dishes that showcase the quality of ingredients above all else. The Bocuse d'Or, the biennial competition named in his honor, is the most prestigious award in the world for French cooking.

"It was time for a change," explains Stephan Hengst, director of marketing and communications at the CIA. "For a long time it was the summit, but French cuisine has fallen out of vogue. We wanted to do away with stale classicism, while still respecting tradition, and also educate our students and guests about the contemporary state of the art." The $3-million renovation was a total, back-to-the-studs makeover. Architect Adam Tihany, designer of haute temples like Per Se and Daniel, is also creative director at the CIA, where he is also building a new thousand-seat theater on campus as part of a large expansion. Gone are the fustiness and dim lighting (and one of the walls) of Escoffier; in its place, a high-ceilinged, open room has huge windows on two sides and a wall of glass looking into the bright, gleaming kitchen.

Riffing on the Bocuse Brand
The décor of the 170-seat room balances elegance with approachability. It's expensive, obviously, but not intimidating, and decidedly unfussy. "Chef Bocuse is kitschy and cheeky, so we wanted to have fun, to play it up while not overdoing it," says Hengst. The lighting in particular is given over to playful riffing on the Bocuse brand: His iconic soupière—the vessel in which he served the truffle soup that made him famous, and which is on the menu—has been multiplied into a central chandelier, and the sconces are all shaped like chef's toques, with a small figure of the chef astride each one, arms folded across his chest. A collection of brightly colored ceramic roosters on the table beneath the chandelier set a proud Gallic tone as one enters. 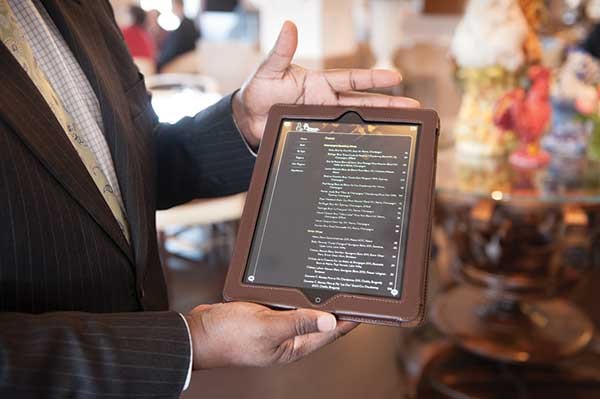 The tables—the same glossy walnut as the floors—are uncovered, though the linens (they call them "lapkins") are soft Frette cotton squares almost large enough to serve as tablecloths. Horizontal expanses of dark wood are elegantly balanced by pale walls and chair backs, and the ambient candlepower is high enough to flatter the food and low enough to flatter the guests. The private dining room is separated from the main space by a glass wall full of recumbent bottles on shelves. An iPad serves as the wine list, but touching the desired bottle on the screen does not, alas, cause it to appear on the table as if by magic. There is no app for that.

Taking the place of the guéridons formerly used in the Escoffier room for the tableside carving of roasts and fishes are sleek, modular carts that can be configured for showcase cocktails, afterdinner tisane service, and tableside churning of ice cream with liquid nitrogen in a hand-cranked KitchenAid mixer originally developed for the Amish. A smoked Manhattan is a delight, tasting like an amped-up Talisker shining through the complementary notes of sweet, sour and bitter; hunks of oak from Jack Daniel's barrels are burned with a blowtorch, and the glass is inverted over the smoldering wood to impart the flavor to the glass. The liquid nitrogen, a brisk 180 degrees below zero, freezes the eggless base in seconds, avoiding any of the large ice crystals that can make conventionally frozen mixtures feel grainy on the tongue and impair their seamless release of flavor. This version, a simple vanilla seductively flecked with tiny seeds, is sublimely creamy and ethereal. It's the perfect, eminently accessible illustration of a dish that is measurably superior when made using new technology. Showmanship aside—the elbow grease and clouds of vapor make an arresting spectacle—this is the best way to make ice cream, period. 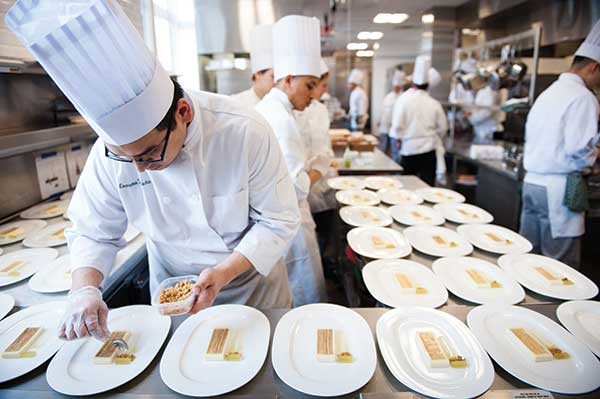 Innovation in a Traditional Context
The food is immaculate. The texture, doneness, and presentation of each component is refined and well articulated, with all the depth of classical tradition and the brighter colors and flavors of the newer style: mixed pickles on the charcuterie plate, al dente baby carrots protruding from a purée, marmalade on the foie gras. While the pastry-topped truffle soup, titled "V.G.E." after Valéry Giscard D'Estaing, the French president for whom Bocuse created the dish, is a nod to the repertoire, the foie gras torchon with cacao, marmalade, and beet salt shows a more forward-leaning approach to technique. A goat cheese cake is also noteworthy: Intricate layers, a glossy sheen, and goaty tanginess make for a seriously sophisticated dessert.