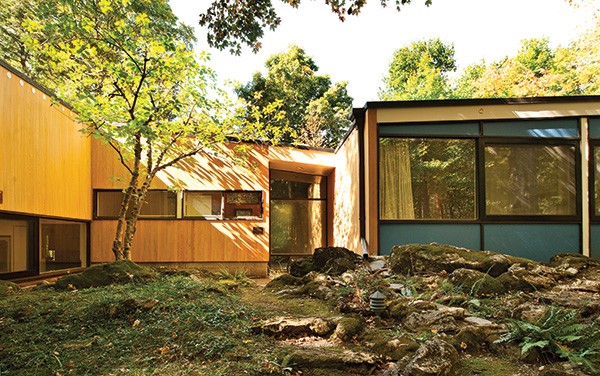 The Hudson Valley is no treasure trove of modernist architecture. There are some notable exceptions—Russel Wright's Manitoga in Garrison and Frank Gehry's Fisher Center at Bard College come to mind—but in the main, the region has largely been ignored by the pioneering architects of the last hundred years. If Hudson Valley architecture was thought of at all, it was as the site of the grand estates of Vanderbilt and Livingston on the east bank of the Hudson River, or the marvelous Federal-style buildings that line Warren Street in Hudson, or stately 19th-century Colonials, or its Dutch vernacular barns.

Then in 1951, something unexpected happened. Vassar College hired Marcel Breuer (1902-1981), a Hungarian-born Bauhaus architect renowned for designing the Whitney Museum and the UNESCO Building in Paris to design a cooperative dormitory, Ferry House. While working on the Ferry House, Breuer was approached by Peter McComb, who was a vice-president at Smith Brother's Cough Drops in Poughkeepsie, and hired to build a home for him and his wife Karen Ranung McComb on a lot about a mile southeast of Vassar. The home that Breuer built for the McCombs is one of the few significant remaining examples of mid-20th-century modern architecture in the region.

By 1951, Breuer was one of the country's preeminent architects with a storied resume—he had studied with Walter Gropius in Germany at Bauhaus before joining him to teach at Harvard in 1937, invented the tubular steel Wassily chair, and greatly influenced a generation of students, including I. M. Pei and Philip Johnson. The Geller House, which Breuer built on Long Island in 1945, was the first residence to feature his "binuclear" design: two wings, one a living-kitchen-dining area, the other a sleeping area, connected by an entrance hallway and topped by a butterfly roof, two opposing surfaces sloping inward toward a central drain that runs through the house. 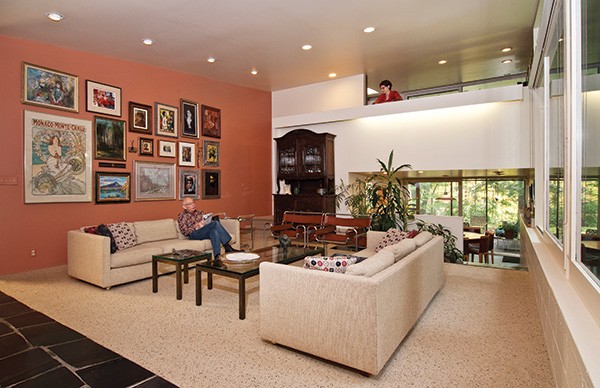 For the McComb House, Breuer modified the binuclear design (keeping the butterfly roof and central drain), adding a second story to one side of the structure, thereby creating an upstairs for the parents' bedroom on one side of the house and bedrooms for the McComb children on the other. Just as Robert Frost believed that good fences made good neighbors, Breuer thought that physical distance between parents and children would foster domestic tranquility—or at least provide respite for beleaguered parents.

A Change of the Guard

A 450-foot-long driveway brings you to the McComb House, with a neat twist in the road so that the house appears suddenly, seeming to float atop a ridge against the western horizon. "Breuer liked surprises," says Arthur Groten, current owner of the house. He and his wife Margery bought the place from the McCombs in 1976, moving in with their two children, aged six and three . (McComb had turned down an earlier offer from a buyer who wanted to make serious alterations to the structure.)

"It was a disaster when we moved in," says Groten. "No significant repairs had been done in many years. The kids thought it was a big adventure, but Margery and I kept a tarp over our bed because of the dust. We'd take it off at night to sleep." The Grotens spent nine months living in a construction site while the entire house was gutted and brought up to code and 1970s standards of living. This was not a straightforward process, and the contractors, Bill Hammond and his father never knew what they would find day to day. "It's not like living in a predictable house, or like owning a Ford or Chevy where anyone can fix it," says Groten. "It requires craftsmen who are willing to push themselves to the limit." This level of exactitude placed by Breuer on his materials and craftspeople can be seen, for instance, in the home's lack of moldings. Crown and floor molding are used in common practice not only as a decorative element, but also to hide flaws where walls meet ceilings or floors. Modern design principles shun ornament, dictating no moldings—every piece of finishing material must be a perfect cut.

In 1976, the house was not insulated. "Oil was 25 cents a gallon in the 1950s," says Groten. "Who cared about insulation?" The sliding windows (a Breuer innovation) on the western exposure of the living room were only a quarter-inch thick and were changed to double-glazed Thermopane windows. The 125 -square-foot wall of glass frames the Catskill Mountains facing due west. Indeed, all 800 square feet of windows were converted to Thermopane.

Like many modern architects, Breuer experimented with new materials in his buildings. The interior walls and ceilings were clad in quarter-inch Masonite, a composite wood panel. The Masonite didn't hold up well after 25 years—it was cracked in many places when the Grotens moved in—and was replaced with sheetrock. Asbestos tile and linoleum were removed and portions of the floor not covered with the original slate (over a radiant heating system) were carpeted. The exterior, clad in cypress siding, was never stained or sealed by the McCombs, so it gradually darkened and split, ruining the floating effect. Recently, the Grotens replaced the exterior wood with the originally specified cypress siding, restoring the original color and the appearance of defying gravity.

The front of the house faces east, and there is a set of stone steps up from the driveway before a slight descent to the front entryway, which is shrouded with opaque glass. (Remember, Breuer liked surprises—the inability to see in creates a sense of anticipation.) The blue panels to the right of the entryway heighten the drama.

Once in the house, Breuer's Modernist credentials are on display, most notably in the free-flowing space that stretches from the library/music room through the living room and then at once up (to the master bedroom, with an alcove looking down on the living room) and down (to the dining room and kitchen.) As architectural critics have noted, as soon as you enter through the front door of a Breuer home, you seem to be drawn outside again. The main interior space has a courtyard-like quality, suitable for entertaining large groups, that the Grotens have put to good use. Arthur, a retired radiologist and postal historian, and Margery, a retired Senior Project Manager for Scenic Hudson, have made their home available for a variety of philanthropic purposes over the years.

But unlike Philip Johnson's Glass House in New Canaan, Connecticut, which seeks to abolish the divide between interior and exterior, the McComb House distinguishes inside from out with a low parapet along the western wall. Viewed from the outside, the windows of the house reflect trees and sky.

A Home, Not a Museum

While Groten is sensitive to Breuer's intentions and to his own role as a custodian of a historic building ("People who own these houses tend to be fanatical: it's like architectural archeology," he says), the architect himself did not wish for his homes to become museums. Upon returning to the Geller House after a year completing it to find every ashtray exactly as he had left it, Breuer supposedly said, " I designed this house for you to live in, not to keep as some sort of shrine." The Grotens have taken the architect at his word, populating the house with an eclectic collection of furniture that runs the gamut from licensed reproductions of chairs by Breuer and Le Courbusier to 19th-century pieces, including a monumental sideboard and a billiard lamp, to Art Nouveau leaded glass. A small pond that separates the living room and kitchen was turned into a planter. The Grotens' approach to décor is careful but not fussy.

Breuer believed that homes should grow with their occupants, and his additive approach to architecture can be seen in the McComb House. Five significant alterations have been made to the house, expanding the original square footage from 2,800 to 4,200 square feet, but not diverging from the architect's intended vision. The first addition was of the music room (now the library) and second bedroom in the northwest quadrant of the house, completed by McComb in 1962. The Grotens oversaw three more additions: a two-story screened-in porch, tucked beneath the original roofline (1983); a 400-square-foot master bedroom suite, extending partway over the garage (1986); and a storage room, which maintained the original roofline (1994).

It is the integrity of the appearance that was important to Breuer, not slavish dedication to the original structure. "Architecture is not the materialization of mood. Its objective is general usefulness, including its visual impact," Breuer wrote. "It should not be a self-portrait of the architect or client, though containing personal elements of both. It should serve generations and, while man comes and goes, building and idea endure."

"It gets into your blood," says Groten of his home. "It demands something of you that a regular house doesn't." This is apparent from Groten's campaign to secure historic status for the McComb House, which required months of research and 50 pages of documentation explaining the structure's importance as belonging to the Modernist architectural canon. Groten's dedication was rewarded when the house was placed on the National Register of Historic Places in 2009.