The Gastropub that is Paving the Way for Midtown Kingston

The bar at The Beverly is an Art Deco beauty, a Kingston-built Cassidy & Sons workhorse that was the backbone of the Kozy Tavern for 80 years. Tucked away on a tree-lined street in Midtown Kingston in the emerging Ten Broeck neighborhood, the place was always a neighborhood joint.

The Beverly, which opened in August 2016, encompasses three separate, interconnected spaces. There's the 80-seat banquet room, which once housed a still during Prohibition (as well as seeing later use as a roller rink). The space is available for rent, as well being used to host art events, like a recent evening of avant-garde 16mm films.

The dining room seats about 30, and the barroom has six snug booths across from the 20-seat bar. Much of what owner Trip Thompson (formerly of Rosendale's Market Market) inherited has been left intact, with design decisions made around honoring the past. (The renovation process actually uncovered an original mural behind the bar that had been obscured for many years.)

Market Market's cult-ish following was due in large part to Thompson and his ex-wife Jenifer Constantine's careful curation of music events and band-themed karaoke nights. Both musicians themselves, the brought a level of insider savvy to their programming that resonated with other grown-up punks and vinyl junkies. At The Beverly, Trippy continues to program an impressive slate of acts, with a lean toward the local and lesser-known, and always with an eye for talent. Recent acts have included Kimya Dawson, Dave Dondero, The Gowanus All-Stars, Johnathan Richman, and Shana Falana. Wednesdays are vinyl night and Thursdays are for The Pansy Club, which blends LGBTQ activism, cocktails, food, and friends. 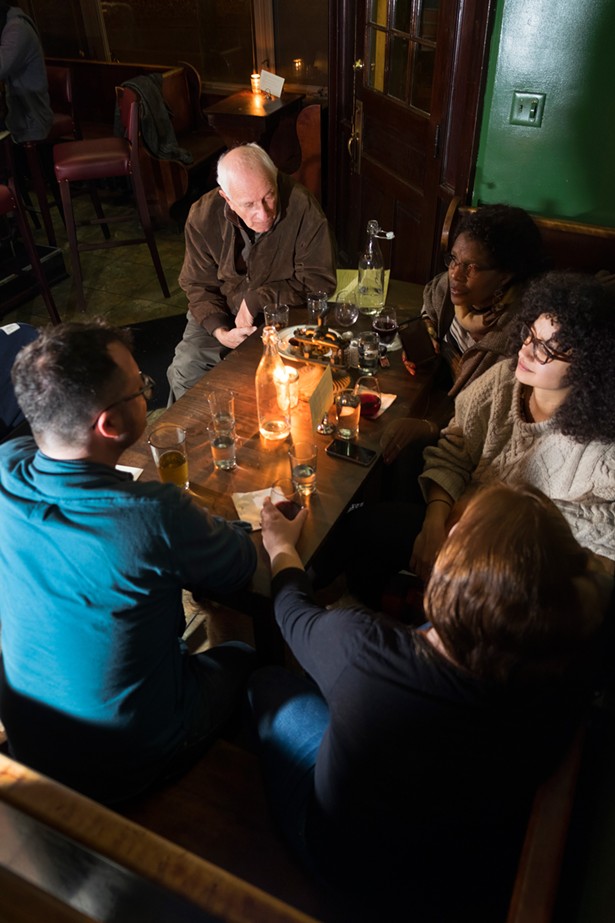 The food at the Beverly is unpretentious.

A good place to begin is with the Ahi tempura roll ($12) served with a piquant wasabi bechamel. Poutine, the iconic, delicious, and heart-disease-inducing dish of Quebec, is also on the menu for $8.

The rocket salad ($8) is a generous mound of arugula tossed with lemon, olive oil, and shaved Pecorino. The pulled pork sandwich offers a nice twist with a mouth-puckering persimmon BBQ sauce, topped with house-made coleslaw. The Shrimp & Grits, though  not cheap at $18, is another one not to miss. This comfort food classic is cooked with milk and served with with bacon, cheddar, and scallions for a rich, umami experience.

Every corner bar will soon have a cocktail program, but the Beverly delivers, featuring forgotten classics like the rye and absinthe-based Sazerac ($10); twists on better-to-be-forgotten classics like the Cosmopolitan ($10), redeemed by its house-infused citrus vodka; and the classic classics, too numerous to be named here. There's a rotating selection of beer on the three taps (usually $6), and a dozen beers in bottles and cans. (The only off note on the beverage front is the limited wine selection, something that will hopefully be remedied when the dining room opens later this month.)

The Beverly is a laidback boite that's half dive bar, half fine dining spot. It has the potential to a put a little-known neighborhood on the map. You heard it here first.

Speaking of The Beverly , Midtown Kingston

Emo Philips at the Beverly on October 19