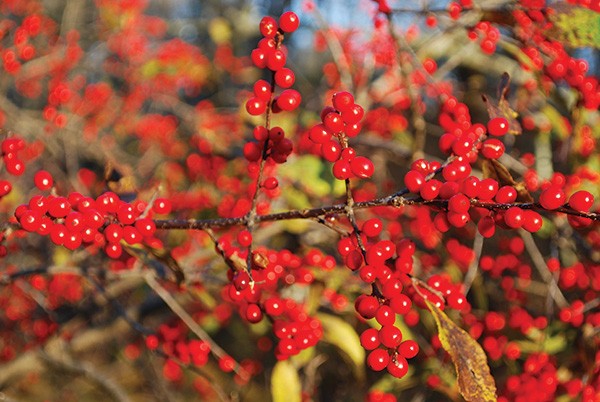 My husband and I enjoy walking the Vassar College campus, itself an arboretum, especially at this time of year, when two particular ornamental shrubs berry it up. Winterberry holly (Ilex verticillata) and beautyberry (Callicarpa dichotoma) are planted in gorgeous masses there. In November, like treasure hunters starved for color, we beeline for their gem-like beauty.

The winterberry hollies with red berries at Vassar are clustered primarily in a median near the Vogelstein Center for Drama and Film and in a grouping east of Sunset Lake. The beautyberries with purple berries line part of the front of Mudd Chemistry Building. The latter are going to have to be relocated when Mudd gets demolished due to construction of the new science center.

Jeff Horst has been the director of operations at Vassar since 1990 and has a special fondness for the horticultural oversight of the campus. (I highly recommend his tours of the Vassar campus and of the arboretum at the Desmond Campus of Mount Saint Mary College.) I asked Horst about those flaming red winterberry hollies at Vassar, and I asked him and Mohonk Mountain House Garden Manager Andrew Koehn about their experiences with beautyberry shrubs.

Winterberry hollies are an excellent plant to use en masse for four seasons of interest. Horst says, "Their overall habit/shape is interesting, and they have handsome summer foliage. They have those gorgeous fruits that, for us, begin in fall and persist into February. They have great wildlife value: The cedar waxwings are the first to eat them after the fruits have softened and begun to decay through a bunch of freeze-and-thaw cycles." The flowers are insignificant—tiny greenish-white fellows in June and July.

Horst says that tour groups that come to the Vassar campus are often surprised to learn that these hollies, unlike most they are familiar with, are deciduous (losing their leaves in the fall). The fruit display becomes even more spectacular once the leaves are off the stems, and is further enhanced when snow comes along as a foil to the bright berries. Winterberry holly shrubs are dioecious—that is, each plant has male or female flowers. Horst says, "To ensure berry production, you need one or two males in the mass, but sometimes you don't even need that, because the pollen can travel quite far."

Pollination is aided by the fact that winterberry occurs natively in our woodlands—you may have noticed colonies of them aflame in late fall and winter. They are often found in low, wet areas—which tells you that they could be used in wet areas in your yard, too. They tolerate clay soils, which tend toward poor drainage. Interestingly, winterberry hollies can also tolerate dry soil well. This dual resiliency is exhibited by the two plantings at Vassar—the patch on low ground by Sunset Lake, where the soil is seasonally wet, and the patch on high ground near the Vogelstein Center for Drama and Film, where the soil can be quite dry.

Depending on the variety of winterberry, the height can reach from only two to three feet—as with the extra showy cultivar 'Red Sprite'—to eight feet or more, as with the more subtle native colonies. (The width is generally in the same range as the height.) In a landscape situation, Horst recommends using a mass of winterberry holly plants in front of an evergreen backdrop. They make good hedging shrubs and excellent rain garden plants.

Although they can tolerate pruning when needed, Horst recommends planting them in spaces where they can reach their full genetic potential without pruning. Horst says, "I see them around the beaver pond at our camp near Brant Lake in the Adirondacks, and they are majestic when allowed to grow to natural dimensions."

Winterberry holly shrubs are cold hardy to USDA Zone 3, which means they are sufficiently hardy to be used anywhere in the Hudson Valley. Winterberry holly can grow in full sun (six or more hours of direct sun a day) to part shade (three to six hours of sun each day). They have no significant pests or diseases. The one thing they can't abide is highly alkaline soil; they prefer neutral to acidic soil.

In addition to 'Red Sprite,' some promising cultivars of winterberry holly include 'Winter Gold' with its apricot-colored berries, 'Berry Heavy' with its heavy fruiting on tall stems, and the tried-and-true 'Winter Red,' which matures to eight feet tall and stays berried up all winter. See Resources for a list that gives the best male pollinator for a given winterberry holly selection.

For many weeks in fall, beautyberry is a shrub that stops you in your tracks with its candy-like purple berries. (The Greek-derived genus, Callicarpa, means "beautiful fruit.") However, it is more fussy than winterberry holly. Both Jeff Horst at Vassar and Andrew Koehn at Mohonk have reported that their beautyberries (hardy to Zone 5) can die back hard in the winter, to the point of being considered "subshrubs" (woody shrubs that die to the ground in the winter but shoot back up in spring).

Mercifully, beautyberry blooms on "new wood," so that the plant still has a shot at having nice fruits even after being beaten up by the previous winter. However, Koehn says that in the rough, windy mountainside conditions of Mohonk, his beautyberries have not fared especially well, and that most years, the fruit is not showy. By contrast, in the more protected spot at Vassar, the plants have more consistently fruited well. The lesson here is to choose a site for your beautyberry shrubs that is protected from winter winds.

While the berries can be spectacular for six weeks or so, there's not a lot else that's showy about the plant; the summer flowers are only subtly ornamental, for instance. It's really a one-season-interest plant. Beautyberry is self-pollinating, but a heavier fruitset is likely if you use a group of the shrubs.

Depending on the variety of beautyberry, its ultimate height is two to four feet and width is three to five feet. Like winterberry holly, it grows in full sun to part shade, and it also makes a good hedging plant. It prefers "moist, well-drained soil"—as almost all plants do—but it can tolerate some drought. It has no significant pests or diseases.

The genus Callicarpa has more than 140 species in it, from Callicarpa cubensis (native to Cuba) to C. yunnanensis (native to China). In our landscapes the most commonly used beautyberry is C. dichotoma (where "dichotoma" means "repeated branching into two equal parts"). The cultivar 'Early Amethyst' is known for setting fruit earlier, allowing a longer season of berry enjoyment. There are also stunning white-fruiting varieties, like 'Shirobana' and 'Albifructis.'

There have been reports of invasiveness on the part of C. dichotoma (it reseeds itself), but those regions of concern have been tiny and few. Invasive potential is worth keeping tabs on, however.