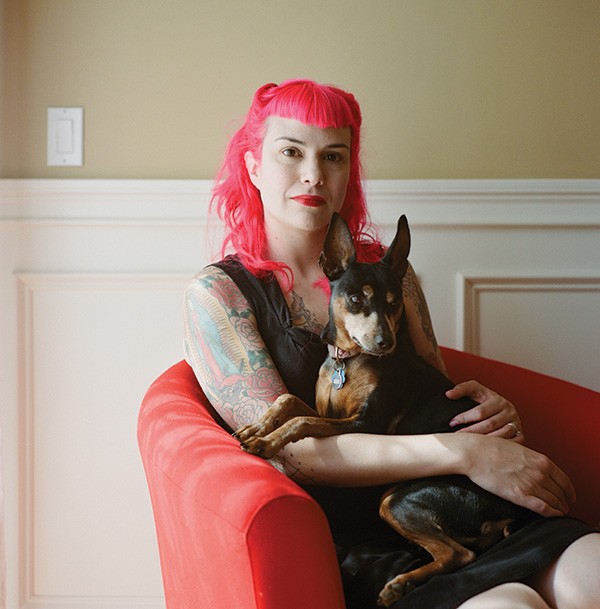 Beacon is famous as the "hippest," most gentrified city in the Hudson Valley, but that's not the whole story. "The Beacon Portrait Project: A Visual Map of Community" at Fovea Exhibitions in Beacon shows the range of residents in this traditionally working-class town.

Photographer Meredith Heuer moved to Beacon with her husband and son from San Francisco in 2006. "I was very excited about living in a smaller town, so I decided I wanted to take a picture of everyone in Beacon, that that would be my celebration of this new place," she explains. This was before Heuer discovered that Beacon had 15,346 residents. Still, she pressed on with her project. So far, she's filmed 101 Beaconites, 20 of whom appear in the show.

Heuer grew up in inner-city Detroit; she was the only white kid in her kindergarten class. She chose Beacon partly for its ethnic diversity. Heuer's goal in this project was to find a wide variety of subjects. At first, she'd approach strangers on the street asking to photograph them. But most people were in a hurry, or suspicious, and there is a certain anonymity to a street portrait. "So eventually I came up with the idea of taking a picture of a person and having them recommend me to the next person," Heuer recounts. "That way I would expand my social circle, and this person would be my calling card to the next. And it took the power of choosing out of my hands." Currently, she has several chains of subjects, which she calls "family trees."

The recommendations are unpredictable. Some subjects suggest a relative, others choose someone they've met in a supermarket, or seen at the weekly City Council meeting. The Duchess County Arts Council recognized the importance of Heuer's work, awarding her their first-ever individual artist grant. She is a "people's photographer," the way Pete Seeger (a resident of Beacon, as yet unphotographed by Heuer) is a "people's singer." Using the skills she developed profiling such superstars as Arnold Schwarzenegger and Richard Branson for major magazines, Heuer turns her lens on the townsfolk. Each subject receives a free print of their portrait. The show's opening, on October 12, included the broadest cross-section of Beacon citizenry ever seen outside an AA meeting.

Heuer pursues her vision with tenacious devotion. She uses only natural light and real film. Each of the subjects is photographed at home, and anyone else living there is invited into the picture. The sessions last roughly an hour. Asked how she chooses which room to use, Heuer says, "We're guided by light." Natural light is soft, flattering, and has been employed by artists for centuries. Unconsciously, we perceive a naturally-lit photograph as honest, uncontrived.

The way a Renaissance painting uses incidental objects as symbols—for example, the Virgin Mary is often shown wearing pearls, to symbolize purity—Heuer includes decorative elements as commentary. In one of her portraits, a young couple hugs beneath a poster of which one word is visible: "CHERISH." I asked Heuer if she rearranges rooms to make them more meaningful. She said no, but she's delighted with lucky conjunctions.

The pictures have no captions. On her website, they're listed solely by number—roughly in the order they were shot. At Fovea, the subjects' names are listed. "The Beacon Portrait Project" intends to show Beaconites in purely visual terms. The viewer becomes a detective, deciding who's straight, who's gay, which children are adopted. One pleasure of living in a community is a civilized voyeurism.

Shots from Meredith Heuer's "The Beacon Portrait Project: A Visual Map of Community."