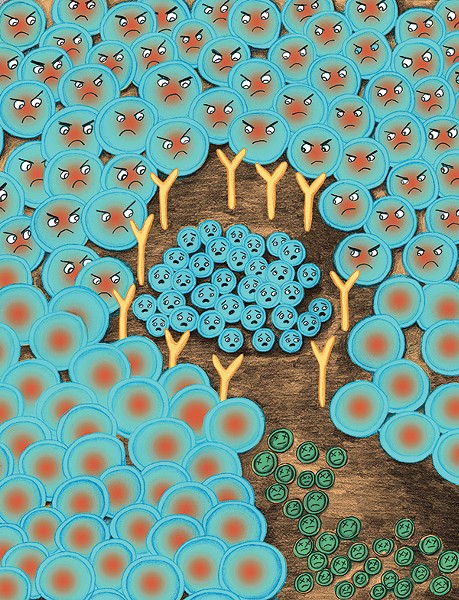 For an estimated 50 million Americans, there's a war going on inside the body. As far as wars go, this one is senseless—even downright insane. Picture this: Suddenly, without warning, the Navy SEAL defense corps that is the human immune system goes on a metabolic rampage. White blood cells, like millions of tiny soldiers gone haywire, begin to infiltrate a chosen area—whether it's the pancreas or liver, gastrointestinal tract or brain. Yet instead of going after a foreign intruder such as harmful bacteria, they are assaulting healthy, innocent body tissue. It's as if these cells have collective amnesia and have forgotten the difference between "self" and "nonself." The result is an insidious inflammatory response, a sickness where none existed before and where none ought to exist—and a disease that is often as hard to treat as it is to understand.

This is not the Twilight Zone. It's autoimmune disease, and it's very real—even more ubiquitous in our culture than cancer. Yet despite its prevalence, many people don't really know what an autoimmune disease is; though researchers have identified some 80 to 100 of these disorders, 85 percent of Americans can't name even one of them. Individually, many of these illnesses are well known—such as multiple sclerosis (in which the body attacks the central nervous system); type 1 diabetes (target: the pancreas); and ulcerative colitis, Crohn's disease, and celiac (the GI tract). Others are lesser known, like vitiligo, a form of autoimmunity resulting in loss of skin pigmentation (Michael Jackson had it). A few, like lupus and rheumatoid arthritis, are systemic—meaning the self-attack crosses organ lines and affects many areas throughout the body. In addition to their autoimmune nature, there's one more thing that these widely disparate illnesses all have in common: They're on the rise.

When the Body Turns on Itself
"We're seeing more autoimmunity, there's no question about it," says Kenneth Bock, MD, who practices integrative medicine in Red Hook. Among the disorders he's encountering more frequently these days is Hashimoto thyroiditis, a self-attack of the thyroid gland ("It's so common now, it's incredible"). And science confirms that over the last three decades, autoimmune disease in first-world countries has been soaring to nearly epidemic rates. A 2008 study in Finland showed that incidence of type 1 diabetes (not to be confused with type 2 diabetes, which is not autoimmune in nature) had more than doubled in the previous 25 years, while a study of blood registries in Minnesota found that celiac disease is four times more common now than it was in the 1950s.

Why is this happening? There are as many theories as there are autoimmune disorders. Some cite the "too clean" hypothesis—with the eradication of so many bacteria and pathogens from widespread antibiotic and antibacterial use, the immune system has too little to do and thus turns on itself, as if out of boredom. Others take the opposite tack and blame environmental toxins for an immune system gone loco. Since about three-quarters of autoimmune patients are female, some researchers see hormones as a factor. In fact, all of these theories, and more, are probably true: Autoimmunity is not only multifactorial but also cumulative. "I call it the immune kettle," says Bock. "When you get all these factors, then the kettle will overflow and boil over. That's when immune imbalances and clinical symptoms appear, and ultimately you get these disorders and diseases. In the kettle are many things, some of them toxins. Heavy metals are known to promote autoimmunity—mercury, lead, arsenic. BPAs, and plastics can push autoimmunity." Recently banned by the FDA, trans fats—which entered our diets after World War II, just before autoimmune disease began to skyrocket—have been linked to autoimmune potentiation. Vitamin D deficiency is another known link. A recent study even found salt (or the iodine in it) to be a possible culprit. Then, of course, there are genetic factors, which are complex. What many people don't realize is that autoimmunity can run in families, popping up in unexpected and seemingly unrelated ways.

It's All in the Family
For Eve Kunkel, a patient of Bock living in Salt Point, autoimmune disease is a family affair. Her mother has vitiligo and her sister has autoimmune hepatitis. But it wasn't until she had her own children that Kunkel realized just how autoimmunity can spread itself across a family tree. Although she is disease free ("I dodged that bullet," she says), all three of her sons—ages three, seven, and eight—have autoimmune disorders. "Dr. Bock had always said, be aware that autoimmunity is in your family and it can pop up out of nowhere," says Kunkel. And it did. Her oldest son one day developed a nose twitch—"a constant twitch, like a bunny"—and the pediatrician shrugged it off as nothing. It was Dr. Bock who recognized it as a sign of PANDAS, a pediatric autoimmune neurological disorder that can arise with strep throat infection. He treated it with antibiotics, and the twitch went away. Last year, Kunkel's youngest son, at two years old, was diagnosed with type 1 diabetes. He also has celiac disease. "No one in my family has type 1 diabetes," says Kunkel. "But we have autoimmune disease, and that's where the connection comes. Physicians don't always see that connection. They ask, 'Do you have type 1 in your family?' If the answer is no, then it's dismissed."