Garin Baker: The Artist as Evolutionary 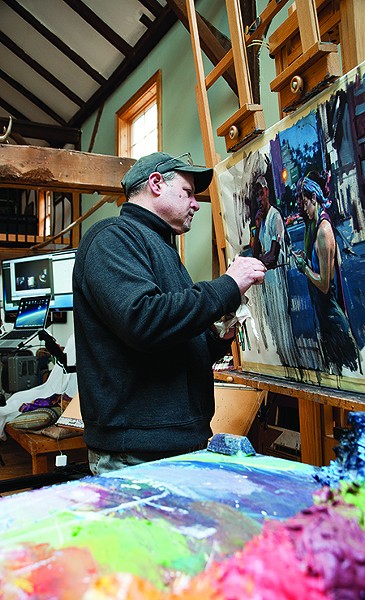 The Artist as Evolutionary

Art collectors used to work directly with galleries to determine what was selling and what was in vogue. But now, according to Garin Baker, talk among East Coast artists focuses on how galleries are scrambling to keep up with rapid changes in the art world. Nothing stays hot for long. "It's changing so fast, you know, next week, everything's different," he says. "So it's like, 'Wait a second, it took me four days to figure all that out—so that's all irrelevant now?'"

That audience is drawn in by the constant updates, instantaneous glimpses into the process of creating art. "It's like they've created a soap opera about themselves, and people gravitate toward that," says Baker, who had, as of January, nearly 7,000 Instagram followers. He claims he's not as savvy as some of the younger artists with regard to social media marketing, but he learns quickly. "I try to allocate a certain amount of time, and I link things together," he said. His Instagram is a combination of finished work and sketches, and scenes from his carriage house in New Windsor. What are his most popular posts? His sketches of nude figures, which typically come from his weekly nude figure-drawing workshops that he hosts at the carriage house for any artist interested at improving his or her figure-drawing skills. When his hired model arrives he'll send an e-mail blast to his artist friends: "The model is posing." Then the artists show.

"They show up, the model poses, we paint and draw for four hours. I put out a brass bucket, everyone throws in a few bucks, the model gets paid," Baker says. "We have coffee, we have laughs, we talk politics, we have a great time."

And if an artist can't make it to the carriage house, there's another digitally progressive option: Baker has sometimes put the posing model on the live video streaming app Periscope. You can work right along with the other artists from wherever you are in the world.