The Art of Odili Donald Odita 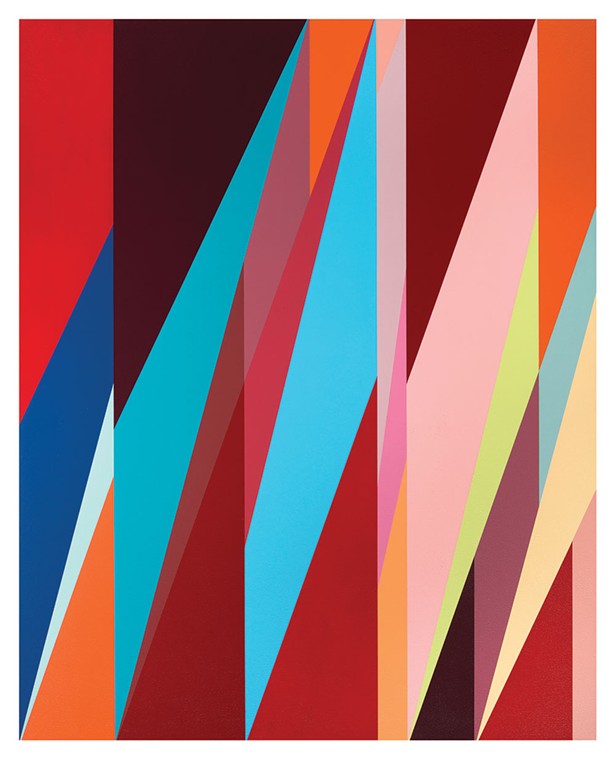 When Odili Donald Odita had his second solo show at Jack Shainman Gallery in Chelsea, an Art in America reviewer said the works were "showstoppers." "Through repetition and variation of form, Odita establishes rhythms that are shifting and pulsing and entirely unpredictable," wrote Janet Koplos.

On our cover this month, the show goes on with Odita's 2017 work Metropolitan, one of the explorations of color and geometry he's been creating since 1999. "The painting verticality can refer to the body or to architecture; it's my own vision of a Jacob Lawrence future architecture," he says of the work, referencing the late painter, storyteller, and educator who characterized his style as "dynamic cubism." Dynamic is an apt word. The sharp-edged forms in Odita's work draw the viewer in along colorful pathways that only seem straightforward; after a minute, you realize you've come to someplace you didn't expect to be at all.

Kurt Vonnegut said that peculiar travel suggestions are dancing lessons from God; Odita has been dancing since before he could walk. "I was six months old when the Biafran war broke out," he says. "My family escaped in time, and I grew up in the United States. If that war hadn't happened, I don't even know if this would be my life."

Whether in Columbus, Ohio, where the family settled, or in Enugu, Nigeria, it seems likely he'd have become an artist. His father was, and encouraged Odili when the five-year-old began to draw without ceasing, copying images from comic books and fashion magazines. He graduated from Ohio State with a BFA and went on to get his MFA at Bennington in 1990; since then, he's been visiting critic at Yale, taught at both the University of Florida and Florida State University. He is currently Associate Professor of Painting at the Tyler School of Art / Temple University in Philadelphia.

The narrative Odili brings to his abstractions is influenced by the traditions of both African and American art. "Lawrence had a narrative structure that related to the colors of black people in art, the notion of making space for black bodies in art. It's an urban story; in the context of Metropolis, it's some kind of a futuristic story. I think through things and draw on draft paper; the drawings are a process in and of themselves. I combine old and new, creating unexpected space to investigate in color. When a piece comes out in color, I'm always surprised by what's there to deal with and come to terms with. We're sponges of our world, and we bring that back out in unexpected ways."

For Odita, telling the story through abstract form and color opens up the options. "I think figurative art can work too, but it lends itself more easily to constructs, one-to-one connections without so much nuance. Not attaching to anything we can name leaves our minds open to freer association. We don't see with our eyes, we see with our minds."

Odita's work will be shown at the Dorsky Museum as part of the exhibition "Abstract Minded: Works by Six Contemporary African Artists," which opens on January 24 and runs through April 15.

4 Exhibits to View in February