The Art of Education: Museum Programs 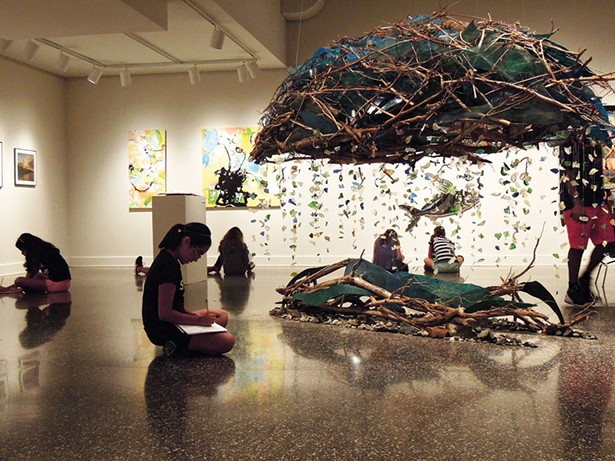 From nature to history, the region offers a diverse selection of museums. Here is a look at some local museums’ educational programming.

The value of experiential learning is obvious: It's the difference between reading a textbook interpretation and reading a person's own words beside the desk where she wrote them and walking in her fooststeps. Not even the most ardent art history lecturer can compare to the experience of standing inches from a canvas or sculpture with an artist at your side. It's this basic awareness that undergirds the development of learning standards that emphasize primary and multiple sources. And it's this awareness that fueled the passage of the Museum Education Act, approved by the New York State Legislature in June and currently awaits the governor's signature, which would establish a $5 million museum education grant program intended to allow New York's 1,600 or so cultural institutions to serve more school districts in this era of reduced funding for education and the arts.

Here in the Hudson Valley, museum folks have been refining their educational programming for decades. At the FDR Library and Museum in Hyde Park, toured by 30,000 students last year, Education Director Jeffrey Urbin says the process starts in second grade. "The minute students get off the bus, their lunches are put on carts named for FDR's Four Freedoms," he says. "They're learning from the first minute. They meet Fala—a person in a dog costume. The kids all love pets, so there's an immediate emotional connection. There's only so explicit you want to get about the mid-20th century with seven-year-olds. For example, we describe Hitler as 'the world's worst bully' and explain that FDR had to stand up to him, just as they need to stand up to bullies at school."

Grades 4 through 6 are introduced to the five constitutional roles of the presidency through a "pretend you are the president" exercise. "If you ask kids if they think it would be easy, the first answer tends to be 'yes,'" says Urbin. "But then they come to understand that it's more like having homework in every subject every single night." For teens and adult learners, the institution can draw on its collection of some 17 million pages of primary source documents. "If you're looking for two exciting people, [Franklin and Eleanor] were absolutely your guy and gal, and you don't have to be a history geek to get that feeling," says Urbin. "The Depression, the New Deal, the creation of the United Nations—for a time, in the mid-20th century, Hyde Park was truly one of the centers of the earth." The National Park Service offers its programming to all school districts free of charge, and a grant from AT&T helps cover transportation costs for cash-strapped districts. AT&T also collaborates with the National Archives and Records Administration to create digitized "curriculum hubs" that bring the Library and Museum to the classroom, whether in Poughkeepsie, Oshkosh, or Anchorage.

Even without the resources of the National Park Service and a big telecom at their disposal, area museums are fully up to speed with curriculum standards and document-based learning and eager to incorporate schools. "They study the history in school, but it's much more exciting when you grasp that it happened right here under your feet," says Sarah Wassberg Johnson, director of education at the Hudson River Maritime Museum in Kingston. "Reading the words of George Washington to the elders of the Old Dutch Church, a local woman writing to her mother about the Stamp Act, or a letter of passage issued to a British deserter brings it home."


The Maritime Museum offers an in-school document-based experience for grades 4 through 8, drawing on excerpts from John Lambert's Travels Through Lower Canada and the United States of North America, 1806, 1807, and 1808. Thematic on-site field trips range from "Boats, Boats, Boats," for the youngest to Revolutionary War history and environmental stewardship in partnership with Poughkeepsie-based environmental nonprofit organization Clearwater. In spring 2018, students got onboard a replica of the Onrust, the ship used by Captain Adriaen Block in a 1614 expedition to chart Henry Hudson's discoveries. The museum currently offers teachers a menu of 11 curriculum-aligned options and a list of potential funding sources. Johnson says the museum has worked with area educators ever since its beginning in 1980, but the growing recognition of the importance of firsthand learning has created new opportunities. "We started our program for every fourth-grader in Kingston with funding from the Boice Bros. Dairy in 2014. They dedicate the profits from their World's Longest Ice Cream Sundae event. Getting that seed money made a big difference; the district could not have afforded to do it on their own."

At the Dorsky Museum on the SUNY New Paltz campus, educator Zachary Bowman works with Ulster BOCES, the New York State Arts Teachers Association, and the college's own resources to get students face-to-face with its 9,000 square feet containing 5,500 works spanning 4,000 years of global culture. "For Title I schools in underserved districts, just paying for the busses to get here can be prohibitive," says Bowman. "So the decision was made to establish a pool of funding for that. We've had a group from Newburgh Free Academy come to an exhibit that fit what they were studying. We've welcomed a number of art classes, but our collection can enrich other areas—say you're teaching Mesopotamia and the Fertile Crescent, we can pull out actual toy-related objects, create a physical connection across time."


Dia Beacon began collaborating with Beacon city schools in 2001, before the museum was officially open. "Every year, an artist partners with the district for in-school and on-site programming; tours are guided by practicing artists who make it a very experiential, participatory experience with the student at the center," Director of Education Meagan Mattingly says. "We have teachers who've been working with us since the beginning. We have an intensive program that's open to high schoolers from all over the region; they can participate for all four years, and some go on to become interns and employees here. It's really important to us that there be no barriers for entry. The Arts Education program is part of the Sackler Institute at Dia Art Foundation, and is completely free for students. Not every teen participating is a visual artist; we get a mix of all kinds of creative and critical thinkers, and our artists work as allies to help them understand how to make their ideas actionable."

Across the region, educators can access museum resources touching on every subject area. The Hudson River Museum, based in Yonkers, partnered with Museum School 25 to explore "the Hudson River, shapes, and patterns, the solar system, constellations, and the art on our walls" in weekly on-site and classroom sessions for grades pre-K through 2. The Gomez Mill House in Northern Orange County has been partnering with Newburgh schools since 1995 to host over 1,000 children a year at their unique site, offering history dating back to 1714 and incorporating "entrepreneurism, American founding principles, American Revolutionary period history, history of Newburgh from Dutch period to the present, arts and craft history and paper making, and civil rights and suffragist movements" through the story of the five key families who owned the oldest American Jewish residence in existence. Bethel Woods Center for the Arts in Sullivan County offers educators its E3 (Engage. Experience. Explore.) program for both on-site and in-school arts experiences, as well as Common Core-aligned social studies in its Explore the `60s program.


No discussion of museum-school collaboration in the Hudson Valley could be complete without a mention of the goings-on at Historic Huguenot Street, where the oldest original neighborhood in the US is expanding and refining its already-rich programming under the direction of award-winning museum and interpretive planner Liselle LaFrance. Little ones meet "Hugo the Huguenot," write with quills, visit a wigwam, and play period games in costume. Teens study "Life and Death in the 1700s" with the aid of video, house tours, and the French Church Burial Ground, or interrogate French portraiture.

Every program offering lists the precise Standards and Common Core requirements met; on the testimonial page an informal standard that may be at least as crucial is mentioned. "Middle school students are challenging," writes a 7th grade teacher. "The information was presented in such a dynamic, interesting manner that all the students were continually engaged...All the students raved about how interesting the tour was and were able to describe various historical facts they learned."

The list goes on; this is but a slice of the programming available should Governor Cuomo see fit to sign the Museum Education bill into law. And museum educators are always eager to see more kids. "Give me any idea, and I'll find objects that are related," says the Dorsky's Bowman. "Most museums are eager to align with schools. We want all the teachers and all the students to know this is for them, this is something they can feel comfortable with, take some ownership. And of course, we hope we're inspiring lifelong museum visitors in the process."

Roots to Renewal: Hawthorne Valley Celebrates 50 Years with a Day of Art, Film, and Performances on the Farm Sponsored