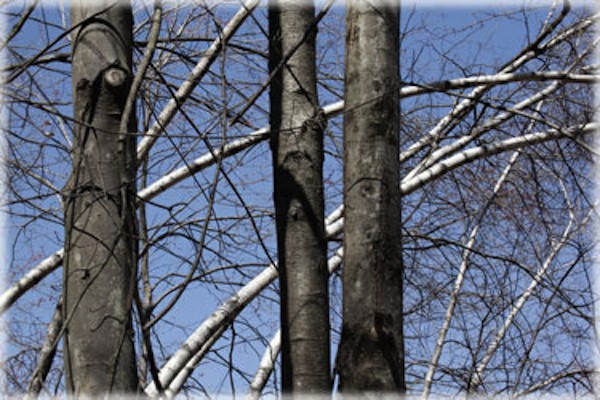 Hopefully you're not feeling worn down by this seemingly never-ending winter. You might, however, be noticing the sense of winding down that comes with a waning Moon—the desire to wrap up projects, de-clutter your home or just lay low socially. This month, it's a winding-down with an edge or an undercurrent to it: the weekend's Aries New Moon is about as plugged into the sky's major players as it can get, making it a harbinger of things to come.

This New Moon will be exact just before 2:45 pm EDT this Sunday, March 30, when the Moon forms a conjunction to the Sun in Aries. The Sun and Moon will align with three of the planets involved with the incredible cardinal grand cross on April 23—hence it being a harbinger. The three other planets are Uranus in Aries, Jupiter in Cancer and Pluto in Capricorn. That makes this New Moon a kind of echo from the future, bringing our ego conscious or will (the Sun) and emotional body or intuition (the Moon) into direct contact with the slower-moving planetary forces shaping the world around us for the long-term. Said another way, whatever inner tension you may feel this weekend around reinventing yourself, or breaking away from some aspect of your past conditioning, or expanding your sense of home and how you feel in it, consider it a preview of April's big event. On one level, this New Moon is an opportunity to identify and align yourself with your most important goals and desires, and then to plant seeds by taking the first steps toward them. What about Mars, though? Mars rules Aries, and therefore rules the Sun and Moon this weekend, yet it's the one planet from April's grand cross that is not aligned with the New Moon. It¹s not out of the picture, however. Rather, Mars is active this weekend in ways that are somewhat veiled or difficult to identify. Translation: while you're sorting through and responding to the more obvious urges, desires and provocations you feel this weekend, you may have to employ some extra awareness, patience or inner Zen to avoid getting caught up in reactions that seem to come out of nowhere—especially in your relationships. Libra is the sign of relationships, as well as justice and balance; in other words, it's the sign of commitment and responsibility. Mars retrograde in Libra can manifest as a lot of frustrated emotion brewing under the surface, just waiting for something to poke it and give it a reason to bust out. Relationship responsibility could therefore feel like pressure under this astrology. Mars in the sign opposite its own, where the Sun and Moon are for the New Moon, increases the difficulty in recognizing who is responsible for what. A major message of the New Moon chart, as Eric phrased it in his Planet Waves FM broadcast this week, has to do with how carefully we need to conduct ourselves in our relationships. With certain minor planets introducing to the scene a sense of psychological chaos and heightening emotional reactions to feeling unloved, you'll want to track your inner dialogue carefully. Doing so will help you to moderate your reactions in relational exchanges this weekend. It is rare that flying off the handle helps a situation, anyway. This weekend, the sky is particularly clear that big reactions made out of hand won¹t help you in the long run. What might help is to put whatever beliefs are fueling your emotions under the microscope of known, worldly truths. Mercury is encountering two planets in Pisces this weekend that could serve as a wake-up call. Once you're awake, you get to choose where you put your energy, how to express your emotions, and where your responsibility truly lies.