The Long View on Education Reform 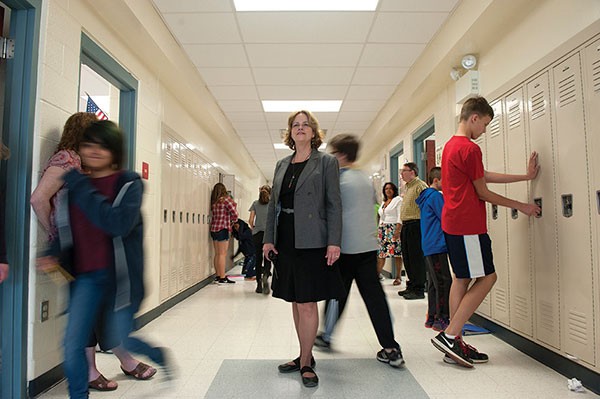 Multiple groups of four or five people sat at Conversation Tables or lounged in Adirondack chairs on the lawn of the Taconic Retreat and Conference Center in Red Hook. Hosted by the Avalon Initiative, an independent education think tank with offices in Chatham, the Enough Already! conference in April was attended by the same broad coalition of public, private, homeschool, university, and research individuals who have banded together against Common Core and are opting out of state testing. Gary Lamb had used registration info to assemble the small, diverse groups so each represented all walks of education. They were discussing the soul of education. "We're creating a unique venue to have conversations that focus on child development and needs," says Lamb, Avalon's Projects Coordinator. "We want to help build a new imagination for education around that."

What's been driving national education reform since the beginning of the millennium is a push toward standardizing achievement. Since 2001, the Program for International Student Assessment (PISA) has been publishing the results of worldwide tests administered to 15-year-olds around the globe, gauging their proficiency near the end of compulsory schooling. With 43 countries participating in 2000, input has grown to 75 countries in 2012, and governments eager to jump in the ranks use PISA to promote education policy reforms. No Child Left Behind (2002) used high-stakes testing to assess school district performance. Race to the Top (2009) policies continued that trend by tying teacher assessment to testing and grant funding to the adoption of Common Core standards. With one eye on global PISA scores, politicians turn to corporations and tech companies for solutions and open a new market for corporate-based strategies.

The US generally ranks somewhere in the middle of the PISA list. And Katie Zahedi, a presenter at Enough Already!, thinks the middle is just fine. Zahedi is principal at Linden Avenue Middle School in Red Hook, and says, "We [at the conference] have a shared vision for how schools should be: that all children feel cared for, watched, and valued, rather than set up for high-stakes competition where there'll always be winners and losers. We don't think there should be any children who are losers. They shouldn't even be worried about winning and losing."

When we spoke by phone, Zahedi was riled. She had just received a memo from the New York State Education Department about training she would receive, which would allow her to administer field tests to her students. The purpose was to let test designers analyze the validity of their test questions. Zahedi had contacted another principal and the superintendent to discuss her concerns. She has grave reservations about handing corporations student data. "They're given free access to our schools and our children to design the products that they sell to us," Zahedi scoffed. "It's obscene."

Zahedi says administrators are buried in policy dictates from the state that seem to only benefit corporate interests: memos stipulating the use of approved vendors; rubrics created by the state to rate her teachers that require her to check prescribed boxes. In the past, she would visit the classroom, observe the teacher, and write it up based on her professional discretion. Just like the state tests administered to students and used to evaluate teacher effectiveness, the purpose is to take a snapshot of a teacher's performance. But what that type of evaluation doesn't take into account is the relationship that develops within the school community. Zahedi takes stock of her teachers' strengths and weaknesses every day of the year. "My job is to motivate, inspire, lead, and evaluate. I'm not a compliance officer," she sighs.

Zahedi suggests that education reform encompass general goals, and that schools be responsible for designing how they're met. In the face of technology industrialists who hope to update the 21st-century classroom, that solution can feel like a return to simpler times. But there is a movement of people who are trying to make it possible. "Fine-grained dictates coming from politicians and business leaders is entirely inappropriate, and it represents a huge overstep of their qualifications into a domain which already has experts." Zahedi says the people who should be designing policy are teachers, school leaders, and education scholars. "We're not producing widgets on an assembly line, and so our work is much more complex than a business-minded perspective or even a political perspective. We work over the long view with children." For the average public school, education is a deeper process.