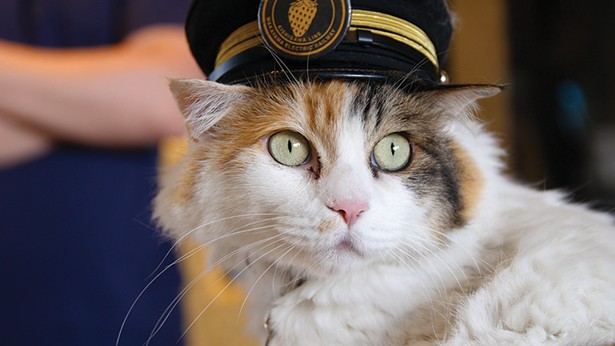 Cats make the perfect movie stars, really. They're natural actors, literally. Besides being so damn cute and all that, they're unpredictably impulsive, doing what they want to do and making it dramatic when—and if—they feel like doing it. Maybe they just want to lie there for a few hours, snoring their little snore while lying on their back, tummy exposed and ready for rubbing. Or maybe they want to tolerate wearing a shark costume as they ride around on a Roomba, chasing a duck (see below). Whatever the attraction is, internet video sensations like Keyboard Cat, Grumpy Cat, and Lil Bub (RIP to both) have become household names. With new camera-ready kitties cropping up by the minute, ready to be liked and shared, it's not at all surprising that there's now a growing litter of feline-fanatic filmmakers who are taking this amateur-video craze to next level: actual indie films focused on, yes, cats. And on January 4, a pack of them will screen their moggy movies at Proctor's Theatre for the 2020 New York Cat Film Festival.

Now in its third year, the festival was founded by Tracie Hotchner, the author of The Cat Bible and The Dog Bible; former host of NPR's "Dog Talk (and Kitties, Too!)" and Sirius/XM's "Cat Chat"; and the founding podcaster of the Radio Pet Lady Network. She answered the questions below via email.

The 2020 New York Cat Film Festival will take place at Proctors Theater in Schenectady on January 4 at 1pm. Tickets are $9 for adults and $6 for seniors and students with ID; a portion of the proceeds will go to benefit local animal welfare groups. Proctors.org.

How did the idea for the film festival come about? Did any theater programmers think you were crazy when you approached them about hosting the event during the first year?

The Cat Film Festival was a natural evolution of the Dog Film Festival, which was already two years along when cat lovers made their desires known to give cats "equal representation" on the screen. Theaters were very happy to have both festivals available, because independent theaters are struggling to maintain and grow an audience—so special events like this are very attractive to them.

The preponderance of amateur internet videos (which the short independent films in the New York Cat Film Festival are not) has certainly shown that people enjoy watching the things that animals—cats, especially—do. What is it about cats that you think people find so fascinating as film subjects?

As you pointed out, the films in my festival bear little resemblance to the shenanigans that are celebrated in cat videos online. I find animal videos cause people to laugh at pets, so I am not a fan of seeing animals being "cute" in compromising or silly situations. I cannot answer as to why true cat lovers don't see the disconnect between admiring and loving cats and watching them basically make fools of themselves. I think one of the reasons the Cat Film Festival has been so successful is precisely because it shows cats all over the world in a respectful, caring way.

How did you select the 14 short films featured in this year's festival? Can you tell our readers about a couple of them?

The films were the most audience-engaging ones that were submitted to me through the online platform Filmfreeway. I made choices so that there was an emotional experience for viewer: animation, funny, thought-provoking, heart-tugging. "Cat Nation" is a fantastic, funny documentary about the Japanese obsession with cats; "Marnie: The Cat Guru" is told in a cat's own voice/point of view about a toy mouse; and "Akmatsu the Cat" is an uplifting documentary about a man making a good life possible for a paralyzed cat in a "cat wheelchair."

Why should someone who's not obsessed with cats attend the festival?

If people just love the art of film, then they will see a vast array of styles and types of films. Also, it is rare to see short films up on the big screen, so this is a chance to explore this lovely length and variety of filmmaking.

What is it you most hope people who come to the festival and see these films feel and experience?

I hope people come away with a deeper sense of the importance and magic of cats in society and as parts of people's families. The fact that a portion of every ticket goes to an animal shelter should also raise awareness of the important, life-saving work being done at the shelters every day—and encourage them to adopt their next pet from a shelter.