Making a Home Between the Amazing, Sublime, and Domestic Space 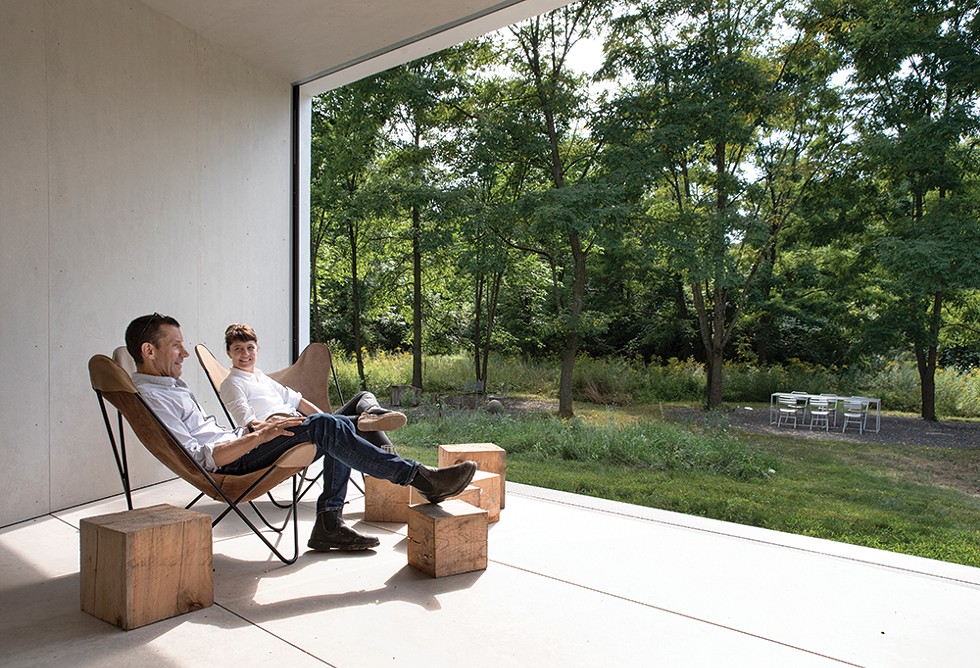 It begins—and ends—with a campsite. Manhattan-based architects David Leven and Stella Betts were building a home for a client in Ancram when a local friend told them about 10 untouched acres nearby. "It was barely for sale,"explains Betts. "But we knew someone was thinking about selling it." The husband-and-wife design partners had been coming to Columbia County since the late '90s (Leven's brother owns Irving Farm Coffee Roasters in nearby Millerton) and had found the Hudson Valley a perfect canvas to explore many of the themes that recur throughout their work: the interplay between architecture and geometry; the hierarchy of spaces; the artful possibilities in the design of doors and windows; and, most especially, how far they could meld indoor and outdoor living within the framework of a design.

Hoping to build their own retreat, they looked at various properties in the area but always came back to the privately sited meadow in the middle of woods. "It always just sucked us back in,"explains Betts. "Other properties had huge soaring views of the mountains, but we loved the privacy of being tucked in the woods. I mean, talk about outdoor domestic space—it felt like a room with trees surrounding it. We just fell in love."

The couple bought the property in 2007 and began setting up their encampment. It remained largely a campsite over the next six years, as the couple gradually built up the outdoor features and explored their aesthetic, professionally. After clearing a few trees from the acre-sized meadow, they erected a tent platform and stayed upstate weekends from spring through autumn. A gravel patio with a barbecue and metal table served as an outdoor kitchen. They erected an unorthodox outdoor shower out of two concrete septic drywells bought at Keeler Precast Concrete in Hudson and utilized concrete septic distribution boxes as fireside seating for their fire pit. After three years, they added a garage and bought an airstream trailer so they could extend their season into the beginning of winter. Over the years, the land became their own private respite, where, living in the undulating woods and changing seasons, they were able to contemplate how they wanted to create a permanent indoor-outdoor structure. "The whole idea of the house grew from the campsite. Architects have been talking about indoor-outdoor space for a long time. We wondered how we could we push that idea even further," remembers Betts. "We wanted the house to be a part of the larger landscape."

Meanwhile, the two designed multiple houses in Columbia and Greene counties and taught: Betts at Columbia University and Leven at Parsons. In 2016, their firm, Levenbetts, was asked to participate in an exhibit at Art Omi called "Unpacking the Cube." Inspired by the prompt and their time weekending outdoors, the couple conceptualized a truly out-of-the-box camping pavilion. "Instead of making small squares, we created one perpendicular 130-degree angle,"explains Betts. The contest helped finalize the concept for their future home, called "Open House," which they soon broke ground for in Hudson with the help of local contractor Javier Gomez. "We wanted to translate three-dimensional sculpture into architecture, creating inhabited space that feels like it's in a sculpture," says Betts. 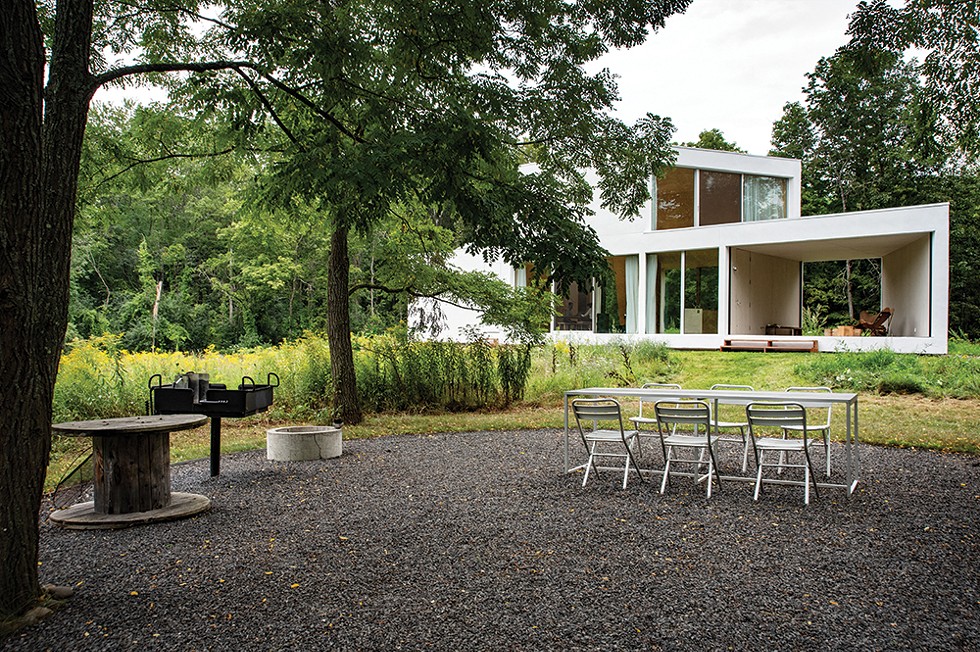 The Shape of It

Built on an east-west axis, the basis of the 1,300-square-foot home is a series of mirrored and adjoining right trapezoids—each with one right-angled wall and an opposing wall set at either a 30- or 60-degree angle. "Throughout the house, the short dimension is always the same and the long dimension is always the same," explains Leven. The four sections of the first floor, along with the second-floor master suite, nest and fit into one another. "A campsite is a pulled-apart domestic space—you take the spaces of a house and sort of scatter them on the land," Betts says. "That idea has influenced a lot of the ways we think about houses. When you go camping, you have to be super efficient, because you have to pack everything in your bag, so everything in this house has a dual purpose."

"We really like how the geometries fit together," says Leven. "We set up a system and then figured out how to live in it." Eschewing both corridors and windows and instead utilizing pocket doors and full east- and west facing-glass walls, the home was designed to make the most of space while never losing the open, expansive feel of a campsite. They designed entryways throughout the structure so it could be entered from multiple points. Each of the cubes can be sealed independently from the others, allowing for every space to be utilized in a variety of ways. So as not to distract from the geometry, the couple finished the home's walls and most of the surfaces with simple sealed plywood and built minimalistic furniture to fit within their design. 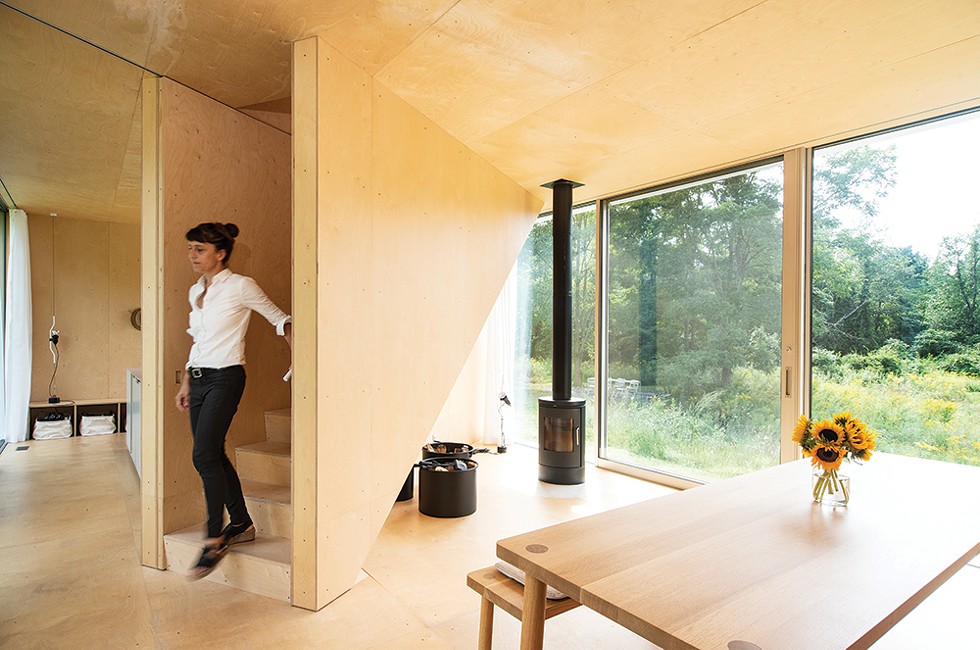 At the home's southern end, the trapezoidal cube remains open, forming a covered outdoor porch and ad hoc entryway. The white concrete space is entered from a gravel path and features retractable screen walls. Mirroring the open front porch, the home's kitchen was designed to compliment the campsite's existing outdoor dining area rather than replace it. A central kitchen island dominates the space, providing ample space for meal preparation and hiding multiple appliances—including two Subzero undercounter refrigerators, Fisher & Pakel dishwasher drawers, and a Smeg cooktop and oven. A low built-in bench along the northern right-angled wall provides seating and doubles as a mudroom area. Adding a bit of visual variety, the opposing angled wall serves as an open-shelf pantry. A screened pocket door integrated into the west-facing glass wall, allows for a constant back and forth between the indoor and outdoor kitchens. 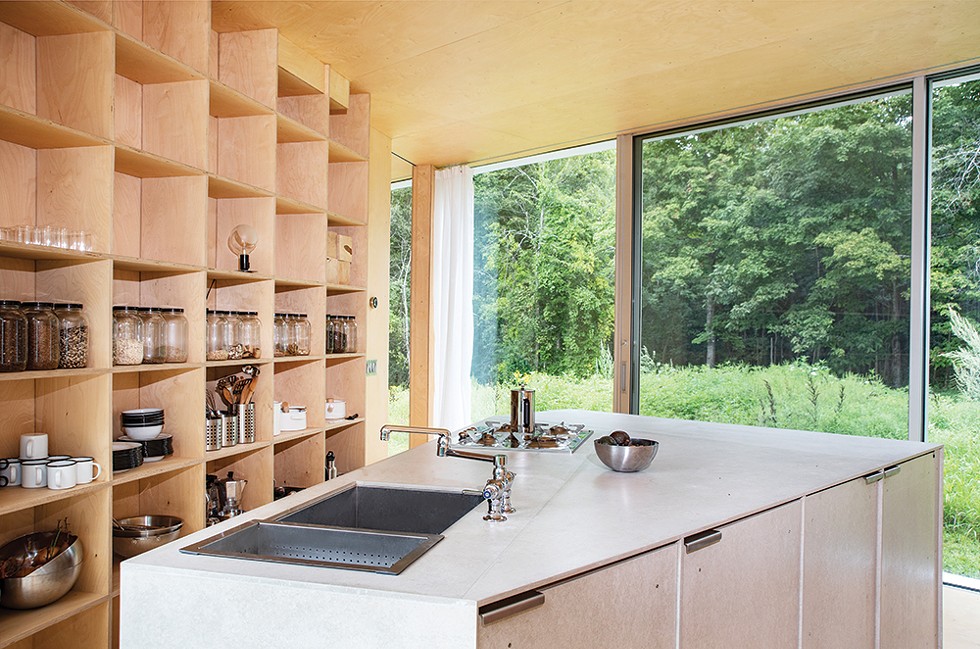 Adjacent to the kitchen, the home's plywood-clad stairwell runs along the angled wall from the home's center cube to the second-story master suite. The remaining space, currently configured as an indoor dining room, has a Morso wood stove set in the corner near the stairwell. Along the opposite straight-edged wall, a built-in bench faces the wood stove and serves as seating for the rectangular dining table built by their firm. During the winter months, the glass walls constantly bring the outdoors in. "We either eat outside or we eat here, but we always feel like we're outside," says Betts.

When One Door Opens...

The northernmost box is split into two smaller spaces. The interior room houses a full bathroom and laundry room, both lit by skylights and connected through pocket doors to the meadow. Finished in deep grey poured concrete, the bathroom remains true to the home's minimalistic themes, while changing up the finish. The step-in shower was designed to continue the feeling of an outdoor shower through the colder months. "In the winter it's a very calm place," explains Betts. "When it's too cold to shower outside, you still get to shower under the skylight." 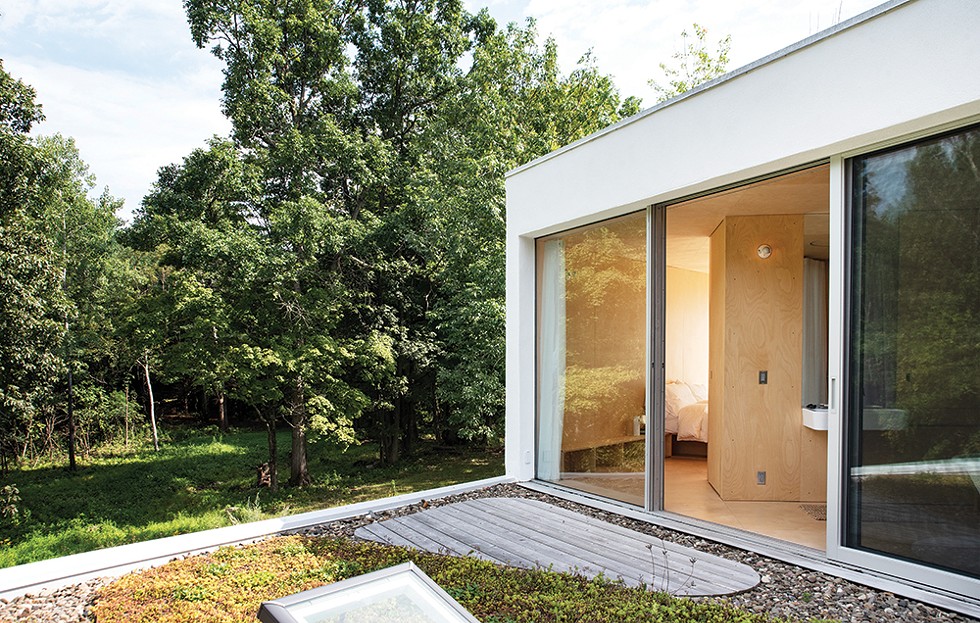 At the home's edge, the living room looks through a wall of north-facing windows into the woods. Here, running along the angled wall, another built-in low plywood bench serves as seating and storage, forgoing the need for a couch or shelving. An additional pocket door separates the space from the dining area, allowing for privacy from the rest of the house, so it can double as guest quarters. The minimalist design also allows for maximum fluidity—with an exchange of the removable rectangular table from one room to the other, the dining and living rooms can be interchanged. 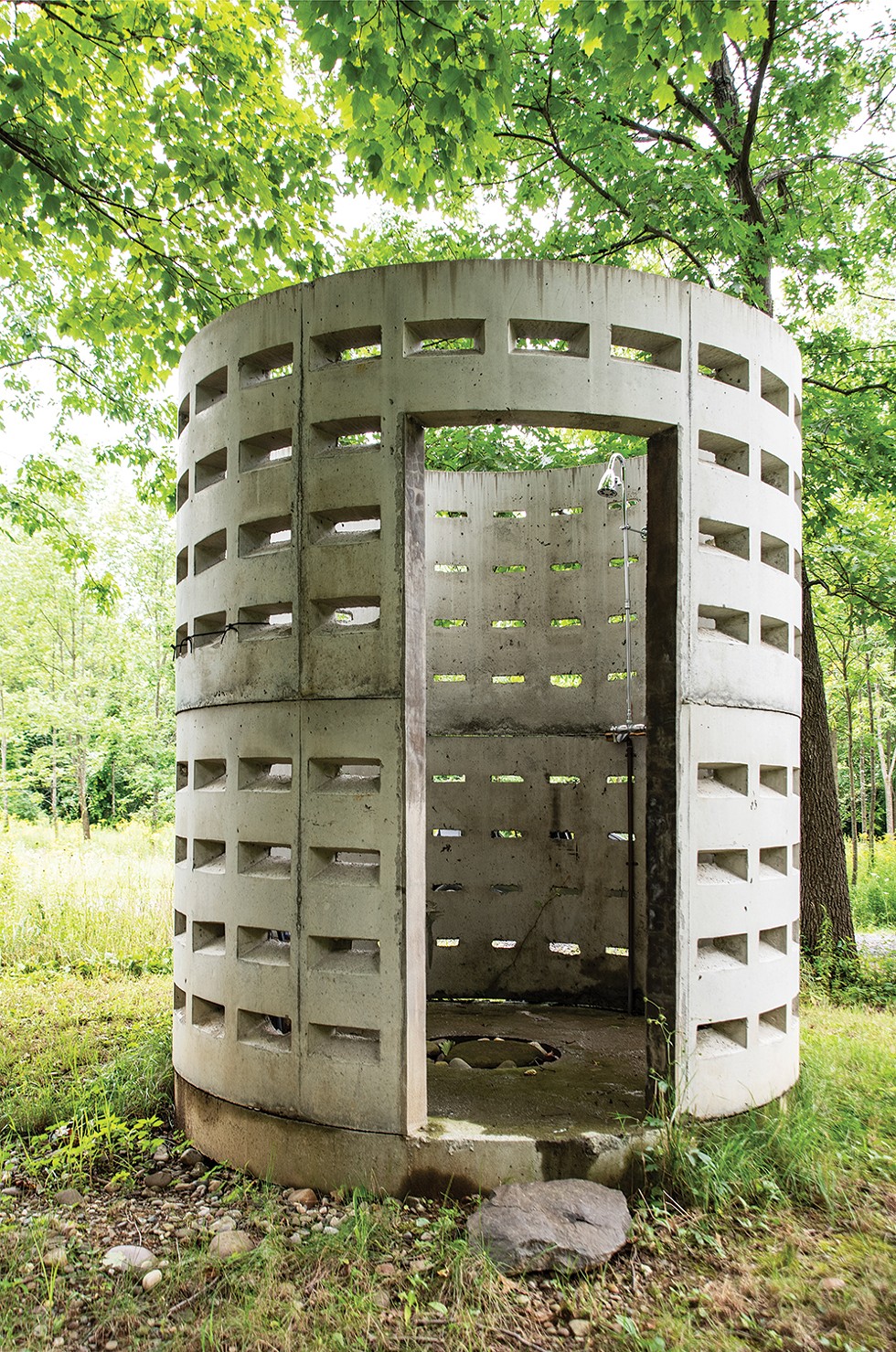 The second-floor master suite breaks the geometric rule with a parallelogram-shaped box perched on top of the first floor's middle. The shape is bisected by the stairwell creating two right-angle triangular rooms, each with glass sliders. Here, they cleverly utilized the area above the stairwell as an angled closet space that deepens as it climbs. A dual-purpose door swings double—shutting off the bathroom when swung left, or the closet when swung right. On one side lies the master bedroom, on the other the full bathroom, which is finished in plywood and features a clawfoot tub. On either side, they planted a roof garden above the first floor. Through the glass, the soft lines of the wooded landscape contrast the sharp geometry of the home. Beyond the roof garden, there are views to the tent platform, fire pit, dining area and outdoor shower. "The house is intentionally small, so that you spend most of your time outside," explains Leven. "But the surrounding 10 acres make it feel luxurious."