The Upsides and Downsides of our Telehealth Moment 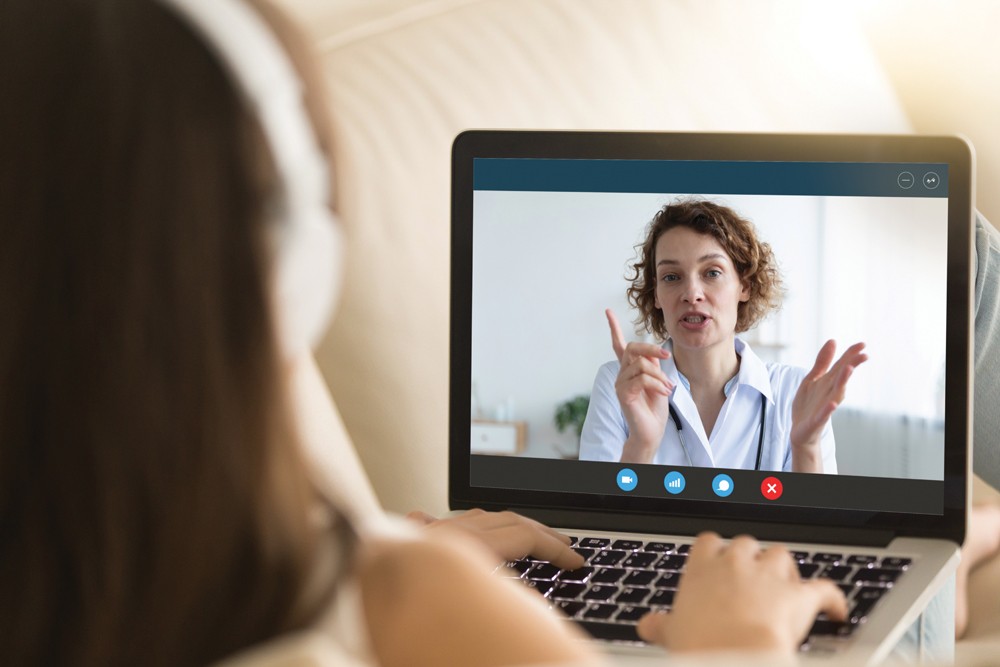 At first glance, having a medical crisis at the height of the COVID-19 lockdown would seem like terrible timing. But for Sarah Yanosh, such timing ended up being a strange sort of gift. For the past five years, she'd been suffering from various neurological issues and an undiagnosed sleep disorder, and on the night of March 20, 2020, she had a tonic clonic (aka grand mal) epileptic seizure. The event landed her in the emergency room at Northern Dutchess Hospital in Rhinebeck, and after a barrage of tests and an all-clear from the attending physician, she was sent home with instructions to follow up with a neurologist within three days. Her providers forbade her to drive, though most medical offices were temporarily shuttered anyway. And all of a sudden, for the first time in years, Yanosh didn't have to go to the doctor. The doctor would come to her. Through her phone.

"This was our first crack at telemedicine and we were all getting the hang of it. They didn't even have an app yet," recalls Yanosh, a single mom from Mount Tremper. "But we had this very comprehensive video appointment. The doctor told me to hold out my hands like I was carrying a pizza box, and close my eyes and touch my nose, and all the same things that I would normally do [in a neurological exam]. Except this is telemed. So this person, who I'm meeting for the first time, looked at all my reports from the ER and was able to get my records very quickly. He could see my X-rays because everything's online now, everything's connected, and he could talk to me about all of it."

Since that first virtual appointment, Yanosh has had more than two dozen televisits with various providers on a range of platforms. She's been able to coordinate benefits between doctors and release her records immediately with e-signatures, because post-COVID, it's all electronic now. And she's made incredible strides medically. "I've been able to accomplish so much in so little time—as far as seeing so many of these doctors without having to figure out how to get there, and child care, and whether or not this works around a school or camp schedule or anything else. I've had to change medications until they got it right. I need to have comprehensive visits where I can take time with a provider to talk about very specific symptoms and any changes. And I can do it all from my home. I wouldn't have made these huge advances without telemedicine. It decreased a wait time that had made me put off taking care of my health for years."

It's plain to see that telemedicine is having an explosive moment. While virtual healthcare is not new, we've seen a 13,000 percent increase in telehealth since the pandemic started. Large health systems went from having about 50 tele-visits a month to tens of thousands of virtual visits a month last spring. And the model is likely here to stay, because attitudes about it have done a 180, says Ian Tong, MD, chief medical officer at the telemedicine company Doctor on Demand. "We are going through a horrible time with COVID and we all feel it. But a silver lining of this, for the American citizen but also for telemedicine, is that we have made a really important discovery, which is that a huge percentage of your care can actually be handled and resolved virtually," Tong says. Many doctors have gone from saying, "Telemedicine is a compromise and I'll never practice that way," to singing its praises. And many patients have gone from being irritated at the thought of televisits, to being irritated at practices that don't offer them. "It's an understatement to call the global pandemic a disruption, but that's probably the best thing to call it," adds Tong. "It has acted like one of the most effective innovators of healthcare in my lifetime."


While we are witnessing telemedicine come of age in 2020, we're watching it work out the kinks, too. Some telehealth platforms are more intuitive and less glitchy than others. And telehealth brings up issues—including privacy concerns, potential screen fatigue, and broadband access and affordability. "The Black community especially, but also Latino and Native American communities, have been the victims of structural racism, and it's left them with low bandwidth, too," says Tong. "The big communications companies, and Congress, need to end digital redlining. No person should be denied access to a doctor because of their zip code. Telemedicine allows us to remove that geographic barrier. Those patients, as long as they have a connection, can get a high-quality doctor from a diverse background."

Legal restrictions also need to loosen if we want to reap the full benefits of telehealth, such as the originating site requirement—which states that for a healthcare service to be covered by Medicare, the patient must visit the physical site where treatment is initiated. And naturally, screens can't replace human touch and face-to-face care in every instance. But as an add-on model of care, telehealth is extremely valuable, especially in our pandemic moment. And we've only begun to graze the surface of what is possible with it.

As people are fast discovering (more than 50 percent of Americans have now tried virtual care, compared with 10 percent pre-COVID), telemedicine offers an interaction that's in some ways more personal and satisfying than an office visit. That's because providers don't need to divide their attention between the patient and the screen for record-keeping. Moreover, the mindset of what doctors can do through telemedicine has expanded significantly in the last few months. "We started out doing urgent care, and now it's gone over to primary care," says Tong. "We've seen a huge uptick in the interest of doing more chronic care, preventive wellness, behavioral health, the whole spectrum. Even labs. Doctor on Demand is one of the few [telehealth companies] that has an integrated national lab platform. Patients are coming to us for a broad set of conditions. It's not just urgent care anymore."

The Limits of Touchless Technology

Telemedicine has been slowly infiltrating a range of specialties over the years, and after COVID hit, it saturated even the most hands-on forms of care, including physical therapy. "When lockdown started, we had no patients coming in," says Meredith Auerbach, a physical therapist at Ivy Rehab in Kingston. "We got our telehealth platform, called Physitrack, up and running by early April, and it lets us give patients the exercises they need over the computer. They can follow an exercise video and I can see them and make sure they're doing it right. I can make sure their bone looks okay and their strength looks okay. There's even an option where you can make the screen look like a protractor, so if you put your ankle or wrist on the screen, it can measure your range of motion. People were really happy about [the telehealth], so it was good to offer that to the people who wanted it." Ivy Rehab plans to continue using it with some patients.


Naturally, telemedicine here has its limits—namely, the lack of physical touch. "I became a PT because I really want to be able to use my hands-on skills with people to help them heal, and obviously, we can't do hands-on through the computer," says Auerbach. "In every body part, I always do some form of massage or joint mobilization. Generally, I would do that if someone comes in. So that would be lacking with telehealth. But there are certain patients that benefit from telehealth anyway, specifically if they're post-surgery and couldn't come in but just needed an exercise program." It doesn't work for everyone, though. One patient had very severe shoulder and neck pain from a car accident, and she could barely do the exercises. "I think if she came in, I could have helped her more with hands-on techniques," says Auerbach. For another patient, who'd recently had ankle surgery, telehealth was a better fit. "We went over all the exercises and he was doing them on his own, with no pain. He just wanted a home program, and he was so grateful that we could do that."

For Sarah Yanosh, who spent much of lockdown healing from her seizure disorder, telemedicine unexpectedly opened up another window of opportunity. After telling her doctors about her chronic exhaustion, one of them suggested that she enroll in an at-home sleep study. "The equipment had to be picked up and dropped off, which would have been a hurdle for me, but my sister helped me do that," she says. "And then, the feedback from the study determined that I have moderate sleep apnea, which I never would have thought I had, but it really affects your neurological response to everything. That has been such a healing thing, and none of it would have happened without telemedicine. I wouldn't have been able to travel back and forth eight million times to the office, or sit in a waiting room for all that time."


These days, she sleeps with a continuous positive airway pressure (CPAP) machine to control the sleep apnea, and she's experiencing another aspect of telemedicine—remote monitoring. "I'm wired into an app now, through Apria, to monitor everything. And if anything changes, if something is not working and my sleep pattern changes, they can adjust that remotely," says Yanosh. "I understand how some people don't like to feel monitored or that their space or privacy is invaded. But I really need this in my particular situation, and I trust my doctors."

As more health-monitoring devices and apps come out on the market each year, we're going to see the next generation of telehealth emerge—which is all about integrating remote monitoring with both virtual and in-person care. Imagine having a pulse oximeter app that could measure your blood oxygen level and catch a case of COVID-19 before you knew you had it. "That's where we'll be next, and the technology for that is already here," says Tong. "It just requires that you buy another device right now [such as an Apple Watch or wearable fitness tracker]. There are a number of really innovative devices coming out for what's called clinical decision support. But the software or apps that use the smartphone to collect the data are the technologies I'm most excited about. Because people already have a smartphone. Once you add on another device that someone has to buy, then you start to see a lot of drop-off."

We're going to see a lot more innovation—but ultimately, says Tong, we're moving toward a virtual-first healthcare system. "All our doctor and nursing visits are going to start remote," he predicts. "If we only use in-person care for the procedures and technical diagnostics that need to be done, that would be a much more efficient use of our healthcare infrastructure in this country." But even now, in their more nascent form, telemedicine's upsides are outweighing its downsides. "It saves so much time for so many people," says Yanosh. "I've had to [go to appointments] when I was really, really sick, and it was a huge burden. Telemedicine just relieves so much anxiety around physical medical care."