Teaching Humanity to Admire Itself

A Psychomagical Conversation with Alejandro Jodorowsky 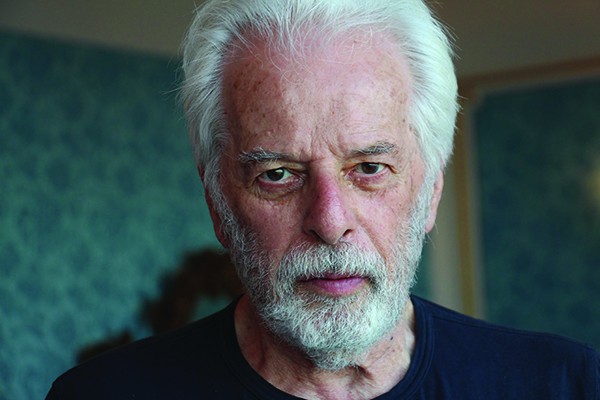 Alejandro Jodorowsky embodies the crazy, creative wisdom of the spiritual warrior. Whether he's making movies, writing books, practicing Zen under a master, learning sexual tantra from Gurdjieff's daughter, giving free tarot readings to all comers, he is the artist, as Dylan says, who doesn't look back.

Jodorowsky's best known works are films he made in the late `60s and early `70s—El Topo and The Holy Mountain. These films are as grotesque as they are beautiful, laden with archetypal imagery as though lifted from the tarot deck, rendering blatantly inner elements and story lines. His films quickly became cult classics, particularly after John Lennon championed and funded his work.

His most recent film, made after a 20-year hiatus from filmmaking, is Dance of Reality (2014). The story is a phantasmagorical weaving of autobiographical narrative into a symbolist tapestry in which his mother, played by diva Pamela Flores, operatically singing her lines, is an ultrafeminine archetype—passionate, grounded, and loyal. And his father, played by Jodorowsky's son Brontis, is a cruel and idealistic man on a mission to assassinate the Chilean dictator but instead becomes his horse trainer. So surreal, the film feels more real than life. The film failed to snag a distribution deal and effectively no one has seen it.

Born in Chile to a Jewish immigrant family fleeing the pogroms in Russia, Jodorowsky emigrated to France in his 20s and founded The Panic Movement (in reference to the wild, uninhibited god Pan), a school of no-holds-barred, psychotransformist performance art. "The panic man is not, he is ever becoming," says Jodorowsky.

In addition to his films, Jodorowsky has written more than 20 books, including novels, an autobiography, works on psychology (or psychomagic, as he calls it), Tarot, and graphic novels. His most recent work, discussed in this interview, is Where the Bird Sings Best (Restless Books, 2015), a novel about his ancestral lineage, which itself is an example of the psychological teachings described in his book Metagenealogy: Self-Discovery Through Psychomagic and the Family Tree, "a practical guide to recognizing and overcoming the patterns and influences of the four generations before you."

Performance luminary Marina Abramovic said of Jodorowsky, "I divide the world into two categories: the originals, and the ones who follow. The originals are the people looking differently, who take the simple elements of everyday life and make miracles. And for me, Alejandro, you are the one original."

I was honored to have the opportunity to interview Mr. Jodorowsky in March.

What is the purpose of this new book, Where the Bird Sings Best?

I understand from reading Metagenealogy that it's a kind of an exercise for you.

I am very aware that I am mortal. The older I get, the more clear it is. So then, I want to know who I am. That is the first question: Who am I, what am I, in this body? Why am I in this world, why am I in this century? And then I search myself. In order to know who I am, I need to know from where I came. Maybe I don't know who I am, but I do know I come from my mother and my father. I come from a long line of ancestors, as you do—a lot of couples, men and women, who wanted to find something together, life, maybe love. Your father and mother, they are two; then your grandparents, there are four persons, eight persons, and then 16 persons, 32 persons, and then thousands of persons, searching for love and making children.

I went very far back into my family history. I came to the moment when the Jewish people were expelled from Spain. That was important for me. I am a product of the expulsion of the Jews from Spain. I am also the product of when Czar Alexander started to kill the Jews in Russia. Then my grandparents escaped to Chile. I was born in Chile. Why? That is why I wrote this book, and then searching my genealogical tree, I discovered a lot of things. I discovered that these people didn't live their lives fully because they suffered, and I needed to heal my genealogical tree and give to every person who made me, a realization. I realized all my ancestors, in a good way. For example, the sister of my father was a prostitute. So I gave to her the possibility to be married with the president of the republic. I realized her. That is why I wrote this book.