Tapping into a Lighter Spirit—Understanding the Emotional Freedom Technique

Tapping is taking off in certain circles of folks interested in self-help and alternative wellness, and naturally, there will be skeptics and nonbelievers, too. The technique is not endorsed by the American Psychological Association, and the studies behind it often come from researchers with a vested interest in the field—such as tapping expert Dawson Church, who has studied the technique's ability to reduce levels of the stress hormone cortisol. We need more studies to explore tapping's scientific efficacy, but without Big Pharma interest, there's less money in the coffers for expensive research. Yet unlike pharmaceutical drugs for anxiety and PTSD, tapping costs nothing, has no harmful side effects, and is basically risk-free (besides the risk of feeling a little silly the first time you do it). "Give it five to 10 minutes, and most likely, you're going to feel a difference," says Ortner. "If it doesn't work for you, then move on to something else."

A Way to Unwind If You Can't Sit Still

After Bishop's breakthrough experience of getting her blood drawn without fainting, she got excited about how tapping might help her in other ways too. "Anytime something stresses me out, I try to tap on it first because it helps me not react emotionally," she says, adding that she's able to think more clearly after using the technique. Bishop likes to be busy and on the move, so relaxation does not come easy to her. "Even when I'm at home, I think of the million things I can get done and I have my to-do list. It's not my nature to relax. I like yoga, but I have a hard time holding a pose. I have a hard time meditating and sitting still. What helps me with tapping is that you're moving, you're talking—and you feel better right away. For me, it's the best strategy."

So far, Bishop has used tapping only once with the kids in her class at Washingtonville Middle School, offering it to a group of sixth-graders before assigning them a listening-comprehension activity. "Typically, it's difficult for this group to focus and pay attention, so one morning I said, 'Let's try this.' We tapped while saying positive affirmations: 'I'm a great kid,' 'I'm going to try my best,' 'I'm amazing,' 'I respect myself.' Then we did the listening assignment, and they literally sat and did all the work in their seats quietly. I only tried it with them once, and I'm not sure it would go as well the next time, but it was amazing how focused they were." Another teacher who took Masterson's class tried tapping with a group of kids to reduce test anxiety, and some kids marveled that tapping helped them better remember what they'd learned. 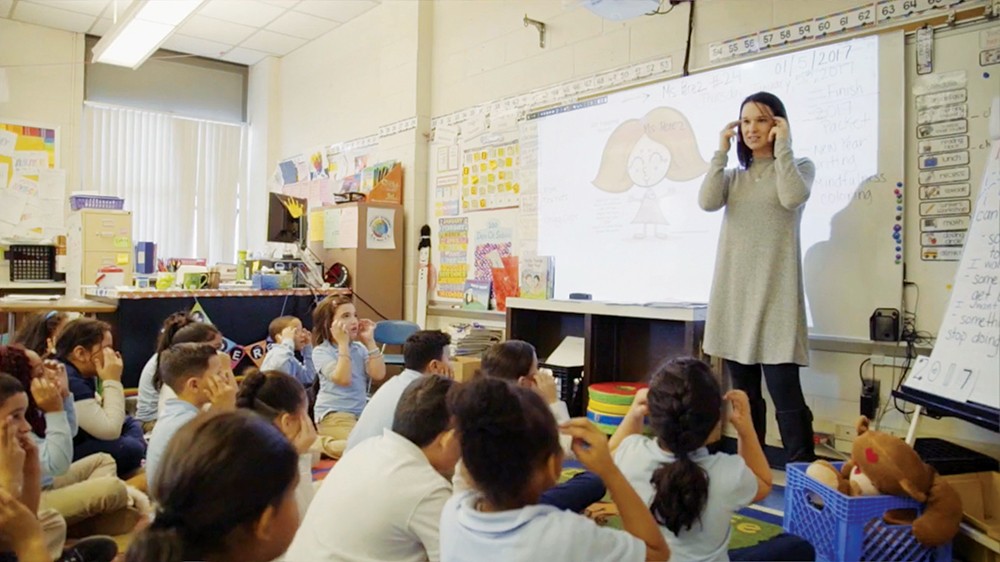 The relationship between feeling calm and thinking more clearly has a basis in brain science, Masterson explains. "When you're stressed, you lose blood flow to the brain's frontal lobe, which is where clear thinking takes place," she says. "Tapping on the body has a calming effect, so it allows the blood to flow back to your frontal lobe." Adding to the sense of calm, tapping involves accepting your emotional state rather than fighting against it, which only creates more tension. "Of course, the technique doesn't take the source of stress away," adds Masterson, "but it helps you to be more effective, calm, and peaceful toward whatever is in front of you."

Masterson's own journey with tapping started when she hit a wall using talk therapy with her adult clients. "I found it frustrating, because talk therapy sometimes gets you spinning," she says. "I wasn't seeing results. With EFT, people can have significant changes really quickly. They can get out of a story that keeps them stuck and get to the underlying issues that are subconscious."