Tapping into a Lighter Spirit—Understanding the Emotional Freedom Technique

When Kayla Bishop, a speech pathologist for Washingtonville Central School District, heard that someone was coming to her school to teach a stress-reduction technique to interested staff, she signed up for the course right away. At the time, she knew nothing about the modality called "tapping" (aka Emotional Freedom Technique or EFT). The course organizer had emailed a video about it, and Bishop was intrigued to see people tapping on acupressure points while talking through their emotional issues—and getting positive results. "It was amazing but hard to believe at first," she says. "I thought, does this really work? If I tap and talk to myself, will I reduce stress?" She was willing to let curiosity override her skepticism—especially if the technique had any chance of helping the stressed-out kids she worked with in middle and high school.

In the first class, instructor Catherine Masterson talked about how people use tapping to manage not just stress but an array of issues from overeating and chronic pain to anxiety and fear. Bishop perked up when she heard that tapping can also help people release various phobias, as she had long struggled with a phobia herself. "Ever since the second grade, I've had this fear where I faint every time I see blood," she says. "It got so bad that I wasn't getting physicals because I dreaded the bloodwork and had so much anxiety about the fainting." Masterson—a licensed RN and certified EFT practitioner with a master's degree in counseling—thought it would be interesting for Bishop to see what happened if she "tapped on" getting bloodwork before an upcoming (and three years overdue) doctor's appointment. 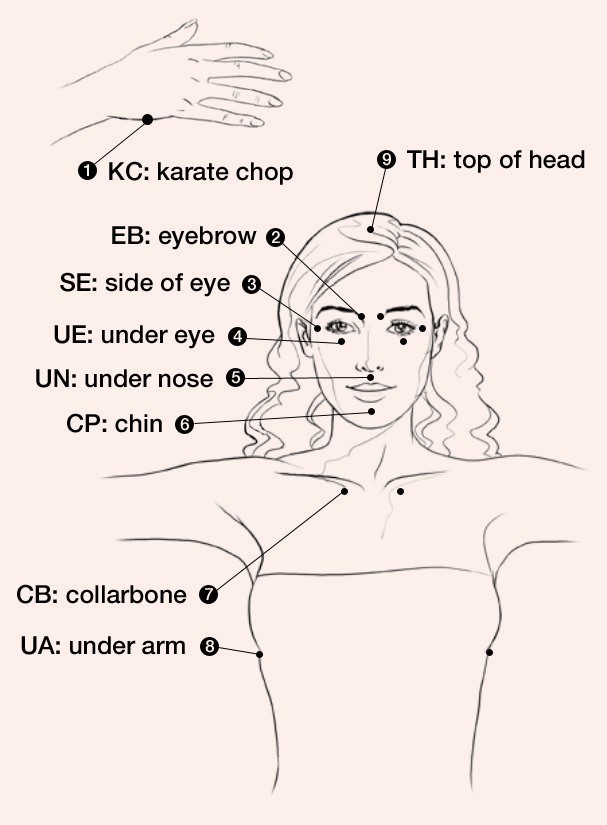 "Catherine worked one-on-one with me and told me what to say while I was tapping and what to look for with my feelings," Bishop recalls. Masterson also taught Bishop and her classmates how to find various acupressure points on the body, such as the side of the hand (the "karate chop" point), inside the eyebrows, below the nose, and on top of the head. In both acupuncture and acupressure, these points correspond with meridians, which are the pathways through which energy ("qi") flows through the body. While acupuncture uses some 300 meridian points, EFT typically uses just nine points on the body.

"For a whole week I tapped on [the acupressure points], saying things like, 'If I faint it's no big deal' and 'I want to be calm,'" Bishop says. "It was about letting myself choose to be calm instead of going in there all worked up like I usually do." To her amazement, the technique worked and she was able to go through with the bloodwork without incident. "It was the first time ever that I didn't faint while getting blood drawn," she says. "I was open-minded going into it, but I don't think I expected the tapping to be as successful as it was so quickly. My husband didn't believe me at first, but now he's buying into it more too. It worked instantly."

This Is Your Brain on EFT

Just what is this weird tapping thing, and how does it work? "We call it tapping because we are literally tapping on these endpoints of meridians on our body," says Nick Ortner, tapping expert and the author of four books on the subject, including The Tapping Solution: A Revolutionary System for Stress-Free Living (Hay House, 2013).


"I like to describe it as a combination of ancient Chinese acupressure and modern psychology, because as we tap, we're saying certain phrases to focus on our problems, our issues, and our challenges," he says. "The latest research shows that when we tap on these endpoints of meridians in our body, we send a calming signal to the amygdala, the fight-or-flight response center (or stress center) of the brain. When someone is anxious, angry, overwhelmed, or stressed, that's the part of the brain that's firing. The tapping is a fast way to calm it down. People have this experience where they say, 'I don't know what just happened, but I was really angry and now I'm not.' Or, 'I was anxious and now I'm not anymore.'"

If it sounds woo-woo or pseudoscience-y, Ortner says there's a growing body of data piling up around tapping—and besides, it just seems to work for a lot of people. A self-described "seeker of ways to feel better," Ortner learned tapping from Gary Craig, who developed EFT in the 1990s based on a similar technique created by Dr. Roger Callahan called Thought Field Therapy (TFT). "I used it personally for a couple of years and was so inspired by it," says Ortner. "The running joke at the time was, 'Don't say anything is wrong around Nick, because he'll make you tap on it.'" In 2007, he made a documentary about tapping, and soon afterwards, with his siblings Jessica and Alex, he created The Tapping Solution organization. (Nick, Jessica, and Alex are kind of like The Trapp Family Singers of the tapping world.) The organization holds a free online summit yearly and, last year, released The Tapping Solution App, which offers over 100 guided tapping sequences with names like "Releasing Anxiety" and "Quiet My Racing Mind."