Talbott & Arding Cheese and Provisions Shop Gets a Space Upgrade

Hudson’s premier cheese and provisions shop Talbott & Arding is expanding into a sprawling new space on July 16. Clocking in at 8,000 square feet, the new storefront will be a continuation of T&A’s current concept as a “hub of makers that represent the best of the Hudson Valley ingredients” per executive chef and cofounder Mona Talbott. “We’re transporting everything that’s great and wonderful in this store and putting it in a new space,” she adds.

Talbott & Arding’s goal is to have the best cheese counter in the Hudson Valley, focusing on local and regional makers. For Talbott, being part of the food community in the Hudson Valley means supporting local enterprise. “We know the cheesemakers and the farms personally, and we’re proud to sell food that has real taste to place,” she says. She believes that Hudson Valley farms are producing some of the finest cheeses in the country, and she loves telling her customers so.

Talbott & Arding is both a culinary and an educational tour de force. Talbott's partner, cofounder and cheesemonger Kate Arding, enjoys teaching customers about the cheesemaking process both verbally and visually. Customers can both taste products and watch them being made through the big glass windows of the pastry department and the kitchen. “It takes the mystery and the preciousness out of it,” Talbott says. “It’s a lot of work, and this is what it looks like.” 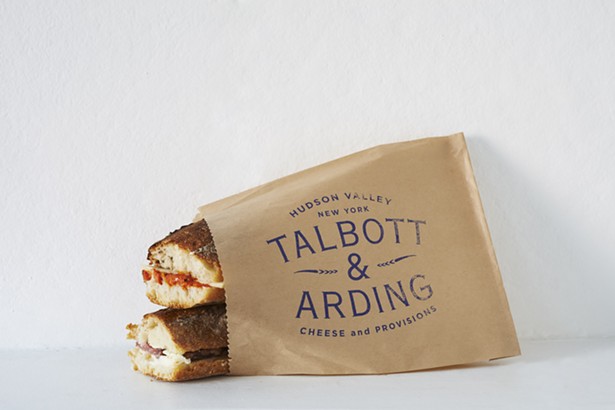 Talbott sees herself as the link in between raw ingredients and delicious food. She deeply respects local farmers, whose hard work is often behind the scenes. Those farmers are what drew her to the Hudson Valley after she returned from cooking and teaching in Italy, where from 2006 to 2011 she was the founding Executive Chef at the Rome Sustainable Food Project at the American Academy in Rome.

Talbott had previously worked in the Hudson Valley as a private chef in Rhinebeck, and she loved the proximity of farms and orchards. “As cheesemongers, cooks, and bakers, we want to be close to the source,” Talbott explains. On her drive home, she passes by the dairy cows that produce milk for Talbott & Arding, or farmers harvesting radishes that they’ll have in stock the next day.

Talbott’s vendors are also her friends and neighbors. Her customers will come through the back door to drop off lamb, beef, or eggs, and then come around through the front door and buy products off the shelves. That sense of community is what drives Talbott, and is part of what brought her and Arding, the operations manager and latter half of the cheese shop’s name, to put down roots in Hudson. “The things we choose to make at Talbott & Arding tell the story of the place and the people who cook the food,” says Talbott. Their most popular item is the chicken parmesan, an easy meal for parents to grab on busy weeknights and serve as the main dish at family dinners.

Talbott self-defines as a narrative cook. “I like stories through cooking,” she explains. She began her college career studying creative writing, and still practices putting pen to paper, publishing articles and recipes for multiple culinary outlets such as the New York Times, Saveur, Bon Appetit, and Organic Cooking, as well as two cookbooks, Biscotti and Zuppe: Recipes from the Kitchen of the American Academy in Rome. She was drawn to cooking because it provided a community that she didn’t get while writing alone at her desk. She found what she was looking for as a cook in remote logging camps in her native British Columbia. Meals were the highlight of the workers’ days, and she got to be the one to provide them. Until then she hadn’t considered cooking a possible profession, but she went on to attend the Western Culinary Institute in Portland, Oregon, from which she graduated with highest honors in 1993. She then worked at the highly acclaimed Berkeley cafe Chez Panisse for five years, and later found herself immersed in the varied food traditions overseas.

Talbott sees food as the gateway into other cultures. “The first thing I do when I visit a new city is to find the market, and then I look where the grandmothers are lining up, and that’s where I want to go eat. I don’t go by Yelp guides, I want to talk to the people who create the food and find out where they eat. I’m interested in day to day life, the kinds of food that you cook at home for yourself and eat on a daily basis. The way people feed their children and the food traditions people hold dear, there’s poetry in that.”

Talbott & Arding is open 11am-4 pm Tuesday through Sunday.