The arts have long been a driving force in Saugerties, as its annual Saugerties Artists Studio Tour attests. Now in its 17th year, the tour brings the public directly into the working spaces of dozens of artists who live and work in Saugerties. This year's tour takes place August 9-11. In February, the Saugerties town board got on-board with promoting local arts by creating a formal arts commission for the town, which will help Saugerties artists win grants and consolidate resources.

Other community-based efforts to improve Saugerties are growing, too...literally, in fact. The Saugerties Village Tree Commission, a band of volunteers that managed to land Saugerties its "Tree City USA" status, is launching "Art for Trees," an online fundraiser scheduled for April to coincide with Arbor Day. "Art for Trees" will feature artists making affordably priced work available in exchange for a donation to the Tree Commission. Participating artists' work will be viewable via the Tree Commission's Facebook and Instagram pages.

The Saugerties town planning board also recently approved plans for a proposed resort and restaurant located on the Hudson River in the Glasco neighborhood, about 2.5 miles outside of the village. Wyldwyck River Camp is set to feature a 120-seat restaurant, 72 total rooms in cabins, fields, staff quarters, artists' studios, and horse stables.

Saugerties's short-term rental market also seems to be in full bloom. The Villa at Saugerties, for example, has been providing lux accommodations for the past five years and is still going strong. Owners Joe Moseley and Amanda Zaslow describe the Villa, situated on 3.6 acres just outside of the village, as "our Mediterranean modern oasis in the Hudson Valley" and was inspired by the couple's honeymoon in Spain.

The Long and the Short (Term Rental) Of It

According to figures provided by Airbnb, the Hudson Valley reaped more than $50 million in income from the short-term rental platform in 2018, and Ulster County alone took in $24.4 million. An Airbnb search for accommodations in Saugerties yields over 270 listings in the town and village, revealing that local homeowners are looking to cash in.


Jennifer Mangione of Grist Mill Realty says that she has many clients looking to buy homes with the idea of renting it short-term as a factor in choosing a property. "I've had a lot of people call with the idea that they want to do this, but there's not a lot of inventory." Long-term rentals are also hard to find, says Mangione. "I get tons of people who call for Saugerties [long-term] rentals, and we're hard-pressed to find them. People are renting out their own spaces for Airbnb."

Up until recently, Saugertiesian Laura Wagner owned the striking c.1880 Victorian on Washington Avenue in Saugerties village. She bought the house in 2010, fully renovated it, and began Airbnb-ing it in 2014 to much success, says Wagner, who is also a real estate agent with Halter Associates. Wagner lived in the back of the house while guests stayed the front. "Managing an Airbnb is intense," says Wagner, "[and] we were making money just to pay for the house." So, when the local real estate market hit a peak, she decided to sell, but not just to any buyer: Wagner sold the house in December 2018 to guests who previously booked a stay there through Airbnb. The new owners plan to continue renting out the house on a short-term basis.

In her real estate dealings, Wagner noticed that the prospect of short-term rental income has turned many a landlord's head away from renting to long-term tenants. "Why would you make $12K a year [on a long-term] when you can make $36K a year on a short-term rental?" There are currently around a dozen long-term rental listings in the Saugerties area on Craigslist.com.

Currently, the town places no prohibitions on short-term rentals, nor do they intend to, according to Andreassen. "However, what might be considered by this board or future boards are some restrictions on noise, hours of operation, limiting the number of guests, and so on," he says. "We'll do what's in the best interest of the property owners, the nearby residents, and the community of Saugerties as a whole." 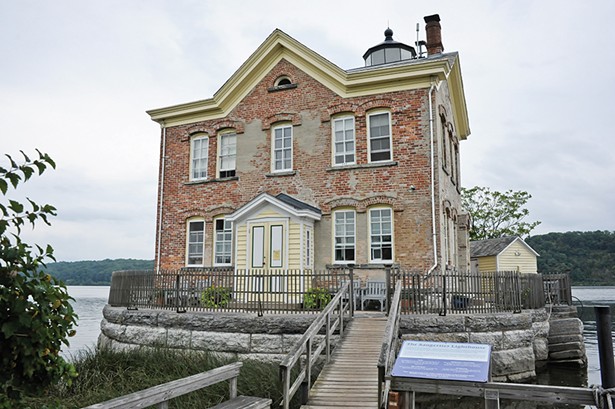