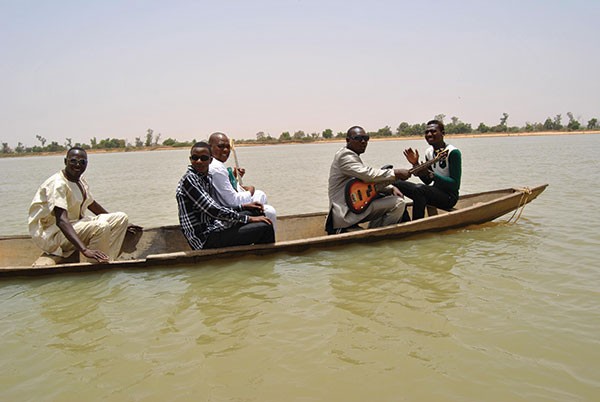 While the Boss is revered for his uplifting, three-hour rock-'n'-roll inspiration-fests, Nigerian collective Tal National regularly tops out its shows at five hours, seven nights a week, when on tour in their homeland. And the group itself is as epic as its performances, with its on-stage ranks numbering anywhere from six to thirteen members, all wildly stirring up a torridly intoxicating stew of multiple disorienting, mercurial electric guitar lines, beckoning vocals, and trance-inducing percussion. Sounds like a heck of a party, yes? Well, Hudson Valley-area music lovers will have their chance to join that party when Tal National visits the region for several shows this month.

Besides its heady, euphoric music, another of Tal National's defining characteristics is its ethnically diverse makeup. Based in the capital city of Niamey, the band includes members from across Nigeria's numerous ethnic groups, some of which have at times been adversaries. "Cultural diversity of the group was always a priority," says guitarist and band leader Almeida. "We are a musical group that sings in several languages. We represent large groups like Hausa and Zarma, but also minorities like the Tuareg group, of which I belong. Because we represent all of the people of Niger, we are accepted everywhere in Niger. Our aim is to unite our differences through music."

That aim has been true since 2000, when Tal National formed. This month sees the release of Zoy Zoy ("what is very sweet"), the group's second album for the UK/Hudson-based label Fat Cat Records. "Zoy Zoy is much more traditional than [Tal National's 2013 album on Fat Cat] Kaani," explains Almeida. "On it you will find rhythms that contain an idea called bori [Muslim Hausu 'spirit music'] in Niger." The new album does indeed shake as if its makers were possessed by spirits during the recording sessions. For an illustration of this phenomenon, just check out such lengthy, percolating calls-to-dance as the title track, "Koana," and "Sey Watya Gaya."

"Our shows are fun," says Almeida, who in addition to playing music serves as a judge in Niamey. "We are presenting the culture of Niger, but we are also playing music for people to dance to and have a good time. I hope that audiences can connect with us at our shows. On stage, the band members are speaking to one another in the language of music, and I hope the audiences can take part in that conversation." April brings area audiences four chances to join the conversation—a discussion their hips and feet definitely won't let them stay out of.

Music Tal National The Half Moon Hudson The Falcon