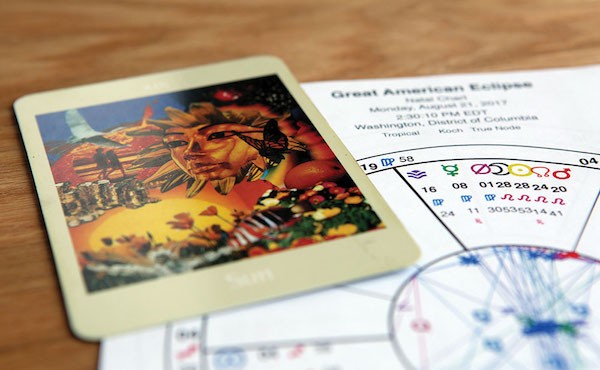 On Monday, August 21, the Moon will pass in front of the Sun, blocking the Sun and casting a shadow over the Pacific Ocean. As the Moon moves and the Earth turns, the shadow will pass just south of Portland, Oregon, traveling southeast, reaching maximum intensity near Memphis, Tennessee, passing through South Carolina and then out into the Atlantic.

This is the first eclipse to touch both coasts of the United States since 1918, though that one had maximum intensity over the Atlantic Ocean south of Alaska, not on land. The August 21 event will be the first eclipse to make landfall exclusively in the United States dating back to 1776. In that sense, it's an unprecedented event, arriving at an unprecedented time in US history.

Everyone paying attention knows that our nation needs some kind of shift. We need healing. Some think it has to be political, others spiritual, others social and economic. There are many different notions regarding in what direction these changes need to go. That might be the one thing that all sides agree on: Change is necessary.

In astrology, eclipses represent watershed events. They can arrive with sweeping changes, and represent before and after moments. This works personally, and it works collectively—and it's especially true for the place where the individual and the collective intersect. Said another way, eclipses represent collective events which can have deep personal influence. They represent change. And with the shadow falling across the United States, change is imminent. It's an open question what kind of change we get, and what kind we create.

Of course, it's rare that anyone has the idea that "we can create change," much less a concept of what that change might be. As is written in the Declaration of Independence, "All experience hath shewn that mankind are more disposed to suffer, while evils are sufferable than to right themselves by abolishing the forms to which they are accustomed."

Said another way, people tend to put up with bullshit because it's inconvenient, difficult or seemingly impossible to make any real changes. That idea is, of course, self-perpetuating, particularly as the problems get worse. And it leaves the business of change to people with agendas and advertising budgets. Their changes usually don't work so well for you, unless you really think it's a good idea to eat a cheeseburger between two slabs of fried chicken, wash it down with Diet Coke, then take diabetes and blood pressure drugs.

When you look at the problems United States society is facing, it's easy to decide that there's no solution. It's not just that people can't agree on the problem; rather, one person's disaster is another person's boon.

For one constituency, protecting women's hard-won right to autonomy over their bodies is allegedly a direct affront to God (and let's get back to killing Muslims and executing prisoners). For one constituency, providing social services is a moral obligation of society; for another, voting for leaders who cut off the voters' own social services is something to celebrate and gloat over.

Sci-fi author Isaac Asimov got it right when he said in a 1980 Newsweek interview, "There is a cult of ignorance in the United States, and there always has been. The strain of anti-intellectualism has been a constant thread winding its way through our political and cultural life, nurtured by the false notion that democracy means that 'my ignorance is just as good as your knowledge.'"

The cult of ignorance is currently camped out alongside the information superhighway, throwing beer bottles at passing vehicles. The ignorant now have a voice, and many with a very, very powerful voice have taken advantage of the ignorance and the divisions it's caused.

When we add to that the destabilizing effect of electronic media, which has led to the idea that there's no such thing as the truth and who cares anyway, we have a real problem on our hands—a problem that many think is merely theoretical and that few people can even see. Then we admit the "smart" phone is ruining everything, as if it's the most obvious thing in the world.

As the August 21 eclipse approaches, the pressure is going to increase, and we're likely to see even more fracturing and polarization in the political discussion. Pressure can induce madness, particularly in the weak, and those who lack intellectual and spiritual grounding. It's also essential to remember that information is moving at lightning speed, every day, all the time. So what are we looking at? What's the nature of this watershed moment?