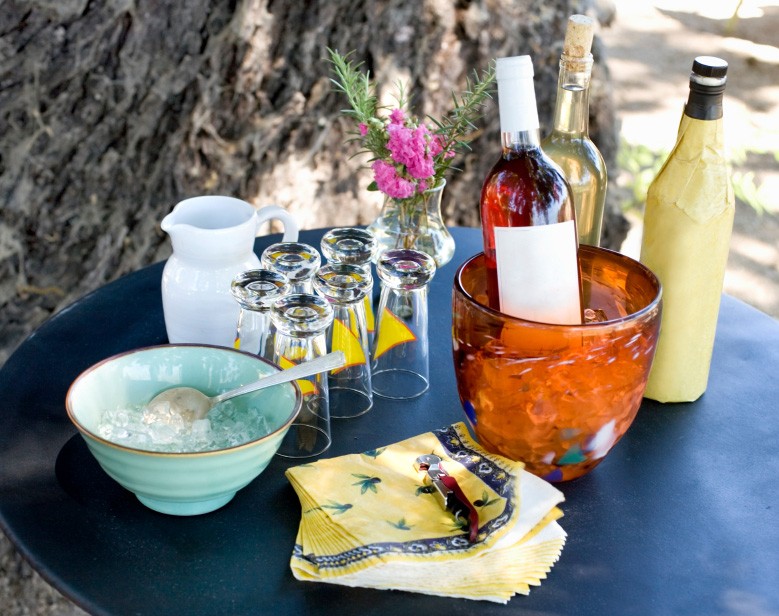 Littlefield has a few standby ideas he swears by for comfort and décor. “Spray something to decrease the insect population a few days beforehand,” he says. “Go big with your lighting—candles everywhere are a must. Luminaria- brown paper bags with some sand and a votive candle inside – are the easiest way to mark pathways and driveways. Break out the Christmas lights and string them everywhere – white, colored, blinking, all of them. It screams fun. So does having an outdoor bar set up.

“Most people don’t have enough seating. Hay bales work wonderfully – we actually had a formal sit-down dinner with everyone sitting on hay bales. And don’t be afraid to bring your indoor furniture outside; it works great and it adds an element of surprise. A great way to do your tables is also very simple: plain brown craft paper and sundries from the garden as centerpieces—branches and sprigs mingled with just a few cut flowers.”

“Music is a big part of any party and there are so many variables,” says Phillips. “I was part of planning a black tie event at which an opera singer performed three pieces, which was perfect for that particular occasion. But not only is the cost difference between live music and a DJ considerable, a good DJ can be much more varied and flexible, with access to a vast library of music performed by the professionals who did it the way people are familiar with and enjoy.”

Littlefield’s solution to the music dilemma is DIY: he’s a fan of the Block Rocker portable Bluetooth speaker set up from ION. “It’s about $125, a one-time investment, and they really do rock the block,” he says.

Re-useable plates, cups, and silverware aren’t just more environmentally friendly, they’re easier for people to handle without ending up with a lap full of Swedish meatballs and potato salad. Hit your local flea markets, thrift stores or church-basement sales and stock up on plastic or melamine dinnerware and used flatware, usually for next to nothing. Don’t forget to stock up on trays --for both serving and cleanup, trays are an outdoor host’s best friend. Acquire or borrow at least a couple of large coolers or ice tubs.

Set up a “comfort station” stocked with those little necessities people sometimes forget that can make or break their enjoyment -- sunscreen, bug repellent, perhaps a few extra hoodies and sweaters for anyone who “just stopped in for a minute” and ends up staying for the midnight drum jam at the firepit. And make sure you’re supplied with BandAids, disinfectant, and a couple of ice packs just in case.

A tent’s a big help, shielding food and guests from the elements; besides the main tent, a smaller camping tent can become the basis of a kids’ area—easily supervised, while giving the younger set a sense of adventure and their own space. Nearby, a tote stocked with some outdoor toys – various balls, Frisbees, maybe Super Soakers if you’re brave – will lend inspiration. A net for volleyball or badminton and their own dedicated cooler of non-alcoholic beverages, and the kids will probably never want to leave. So that their parents don’t have to leave early, it’s a nice touch to have a dedicated napping space –either another small tent or a spot indoors within earshot of the goings on.

With or without hired help or equipment, your outdoor party is a time to get whimsical. “I did a wonderful one where they had thematic food stations: really macho around the grill, an old farm wagon and vegetable crates for the veggies, nautical for seafood,” says Howe. “It was nice visually, and people had fun going to get their food.”

With a firm grip on your logistics, you’ll be freer to enjoy your own bash once the day comes. “Breaking down any event in advance is key to its success. The easier it can be made, the better,” says Phillips. “The day of the event is not a time to be stressed. Just take a deep breath and have fun, connect with all of your guests, and remember to taste the food and desserts. The event isn’t just for the guests, it’s for the hosts as well. Boogie down on the dance floor. It’s your celebration. Wallow in the fun!”